Forty years ago, on the 7th of January 1979, the Vietnamese army overthrew the Khmer Rouge regime. Between April 1975 and January 1979 about 1,5 to 2 million Cambodians died, a quarter of the population. 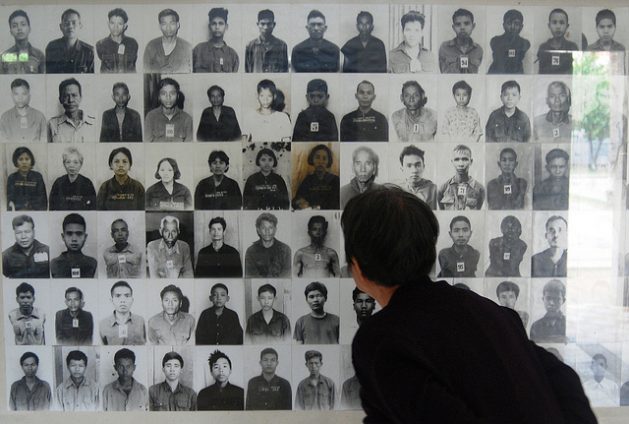 A tourist peers at photographs of people who died in Khmer Rouge custody. /Robert Carmichael/IPS

PHNOM PENH, Cambodia, Jan 8 2019 (IPS) - The anniversary is not actually celebrated. After all these years, talking about the Khmer Rouge is still controversial. This is partly because the genocide came ‘from within’. Almost every family has a feud that goes back to this dark history in the seventies.

How could this have happened?

The Marxist guerrilla movement was able to grow with support from North Vietnam. The Cambodian General Lon Nol, who came to power in 1970 after a coup, wanted to fight these communists and was backed by the United States – at the time involved in the Vietnam war. American bombings hit many civilians, who started to dislike the government and welcomed the Khmer Rouge soldiers when they marched into capital city Phnom Penh in 1975.

But euphoria soon turned into fear. You were in danger if you were considered to be ‘intellectual’. Being able to read, speaking foreign languages or even wearing glasses could be fatal.

In the documentary ‘Iron legs’, by filmmaker Vanna Hem, San Sovan explains how she escaped death.

“They asked me to write something”, she recalls. She is left-handed, but used her right hand and produced some barely readable words. She could walk out freely -being labeled ‘illiterate’.

Guerilla leader Pol Pot wanted an agrarian society, without external interference. People had to leave the cities and were forced to work on the field. Many died from starvation, exhaustion or sickness.

The regime was very suspicious and every possible enemy was tortured and killed. The ‘Tuol Sleng’ or ‘S21-prison’ in Phnom Penh, were these executions took place, gives a clear impression of this violence.

As it is a former school building, you can still see the classrooms that were later turned into torture chambers. The building remained untouched since the seventies.

I visit this genocide museum with Toby, a young Thai man who comes to Cambodia’s capital for the first time. As we walk through the building, Toby becomes very quiet. “Shall we go now?”, he asks after a while.

When he learns about Khmer Rouge soldiers killing children, he’s done with the visit. The regime figured that children would only take revenge once they’d find out their parents were murdered.

He acknowledges he killed enemies of the movement, but “we had to defend ourselves. To say that millions died is too much”.

The interview took place in Anlong Veng, close to the Thai border, where Pol Pot survived for over 20 years after his regime collapsed.

He died in 1998 and was never brought to justice. The same goes for most of the other leaders of the movement.

There is, however, a Khmer Rouge tribunal. In November last year, the court gave its final verdict, after twenty years of investigations.

Two senior leaders, Nuon Chea (92) and Khieu Samphan (87), were both sentenced to life imprisonment. One was ‘Pol Pot’s right hand’, the other one ‘head of state’.

Kaing Guek Eav, alias Duch (76), had been sentenced to life before. He was the chief commander of the S21 prison.

These are the only convictions made by the “Extraordinary Chambers in the Courts of Cambodia” (ECCC) since it came to existence in 1997 in collaboration with the UN. The total cost of the court is about $300 million.

I discuss the result of the court with some young Cambodians. “Thanks to the trial, people are at least talking about this difficult period”, someone says. “In my school there was very few information about Khmer Rouge during history class, although the regime lasted almost four years.”

Just think how European schools teach intensively about the empowerment and the consequences of the Nazi-regime -comparable to Khmer Rouge when it comes to atrocities and number of victims. Immediately after the Second World War, the Nuremberg trials helped to cope with the traumas.

Why did it take so long in Cambodia, only to sentence three people? “If they would dig deeper, they will inevitably arrive at the responsibility of today’s politicians,” someone says, “…thus of Hun Sen,” he whispers immediately after. I’m getting used to Cambodians lowering their voice when they talk about their prime minister. Not out of respect, but out of fear to get into trouble.

The current prime minister Hun Sen was a troop commander under the Khmer Rouge regime. But he always denies he played an active role in the genocide. In 1977 he defected to Vietnam.

The Vietnamese, who invaded Cambodia two years later, made him part of the new Cambodian government. In 1985 he became the prime minister, which he still is today.

Hun Sen did indeed oppose the idea of finding more perpetrators, “as this could cause a civil war”. It is one of his favourite statements to defend his policy -which is a factual dictatorship.

He refers to the peace and stability his governance brought during the last fifteen years. This is a popular message among the generation of Khmer Rouge survivors.

But this country has a very young population, almost two-third of them being under the age of 30. This generation was born after the civil war and did not grow up in fear.

These are young, ambitious people with dreams and hopes for the future. Lots of them don’t need a tribunal to give their verdict on the current politicians who clearly have their roots in this dark past of the Khmer Rouge.