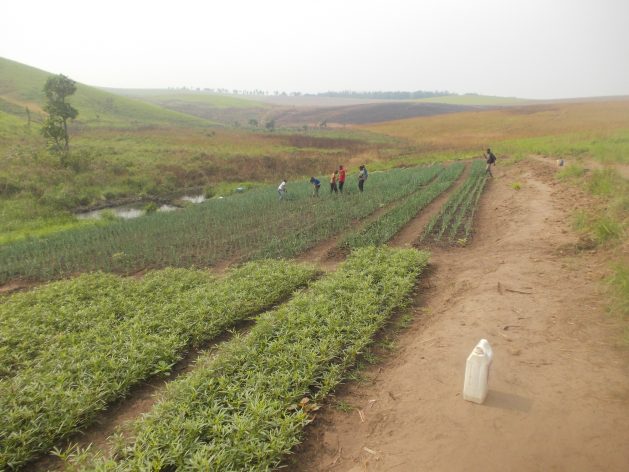 Smallholder farmers at Mamani 6 km from Kikwit, the capital of Kwilu province. Many across the country are learning new farming techniques through practical application. Credit: Badylon Kawanda Bakiman/IPS

KIKWIT, DR Congo, Jan 2 2019 (IPS) - It was almost four years ago in 2015 that members of Farmer’s Frame of Idiofa (FFI), a farmers group in the Democratic Republic of Congo (DRC), produced a mere eight tonnes of sweet potatoes on two hectares of land. But the main reason for the low yield had not necessarily been a climate-related one, but an educational one.
“Thanks to the knowledge about agricultural techniques learnt from Farmer Field School, FFI has produced 30 tonnes of sweet potato in 2017 from a field of two hectares,” says Albert Kukotisa, chairman of FFI, from Kikwit, Kwilu province in southwest DRC.

FFI’s group of farmers are just some of those across the country who are learning new farming techniques thanks to the Farmer Field School (FFS) – an initiative by the Food and Agriculture Organisation of the United Nations (FAO).

The field schools are not necessarily a new concept. According to a survey they were first introduced in 1989 in Indonesia where schools were developed to hope farmers deal with pesticide-induced problems.

And while they are also not new to the DRC, they are proving an effective way to educate and assist farmers.

Lazard Milambo, an FAO expert says that the new element to the FFS is that farmers are introduced to “new ideas with guided exercises without imposition and stimulating discussions by farmers.” He says the involvement of farmers themselves in the training process is also new.

With the FFS, however, farmers are not just told about new techniques and research, they are able to implement it also. Each week, a group of 20 to 25 farmers meet in local field and under the guidance of a trained facilitator they implement new farming techniques. Facilitators have various backgrounds and can include extension workers, employees from NGOs or previously-trained farmers.

“In groups of five they observe and compare two plots over the course of an entire cropping season. One plot follows local conventional methods while the other is used to experiment with what could be considered best practices. The plot of land belongs to a member of the group,” Patience Kutanga, an expert, agricultural engineer and one of the trained facilitators, explains.

Didier Kulenfuka, an agriculture expert adds that “small farmers experiment with and observe key elements of the agro-ecosystem by measuring plant development, taking samples of insects, weeds and diseased plants, and constructing simple cage experiments or comparing characteristics of different soils. At the end of the weekly meeting they present their findings in a plenary session, followed by discussion and planning for the coming weeks.”

According to a World Bank report, “DRC farmers are particularly poor and isolated, therefore vulnerable to climate impacts and other external shocks…”
In a country with 80 million hectares of arable land, “there are more than 50 millions of farmers in the country with land. Most of them are smallholders,” Milambo says.

And according to the same World Bank report the government is, however, committed to a green revolution, pledging to reduce rural poverty by 2020 through agricultural production systems. The government allocated 8 percent of its 2016 budget to agriculture.

But Kikwit, the capital and largest city of Kwilu province, and home to some 186,000 people, has only one university with an agronomic faculty.

Farmers and smallholders instead rely on the advice and knowledge of agricultural extension officers. And now, as Milambo points out, about two million smallholder farmers are working across the country with some 20,000 FFSs.

Françoise Kangala, a 47-year-old farmer of Kongo Central (formerly Bas-Congo) province explains that he learned a lot from the course, including how to identify the best field for planting his crop and how to choose top seeds. His increased knowledge showed in the increased harvest.

“So, my family has harvested 20 tonnes of maniocs [Cassava], Obama variety for a field of one hectare. In 2014 it wasn’t the case. The same land produced only 7 tonnes. Observations about results between old practices and the new is among the innovations of the approach.’’

For John Masamba, a smallholder farmer from Goma, North Kivu province, east of DRC, it’s necessary to popularise this system around the DRC “because it’s a school without walls.” He said he appreciated learning through practice.

“Together, farmers swap experiences. With the knowledge from FFS and using resilient seeds, I have produced [in 2018] 19 tonnes of maize from one a field of one hectare, compared to 7 tonnes in 2016,’’ he says.