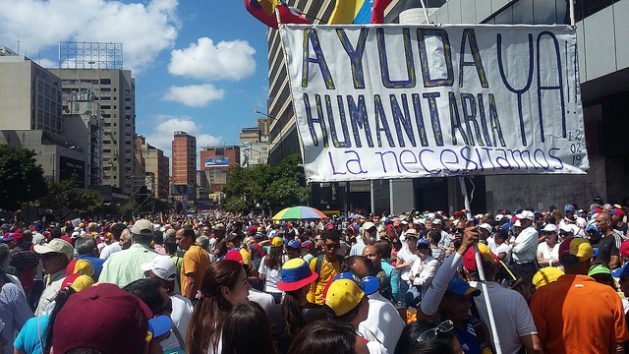 CARACAS, Feb 16 2019 (IPS) - The international food and medical aid awaiting entry into Venezuela from neighboring Colombia, Brazil and Curacao is at the crux of the struggle for power between President Nicolás Maduro and opposition leader Juan Guaidó, recognised as “legitimate president” by 50 governments.

The current situation “offers advantages to Guaidó. It is trying to break the ties between Maduro and the armed forces through the pressure to receive humanitarian aid,” Argentine analyst Andrei Serbin Pont, director of the Regional Coordinator of Economic and Social Research, a Latin American academic network, told IPS.

Serbin said Guaidó should secure the so-far reluctant participation of the Red Cross and the United Nations with respect to getting the aid into the country because “by definition humanitarian aid cannot have political objectives,” which are clearly present in the cooperation offered by governments of the Americas and Europe that refuse to recognise Maduro as the legitimately re-elected president.

"The struggle over the aid makes many local residents here see that there is hope that this time the opposition will bring about change; people now see light at the end of the tunnel." -- Nadine Cubas

President Maduro said: “It is not humanitarian aid but a rotten gift, which carries within the poison of humiliation of our people and serves as a prelude to military intervention. If the United States wants to help us, the blockade, the financial persecution and the economic sanctions against Venezuela should cease.”

U.S. President Donald Trump and several of his Latin America policy advisers repeat the mantra that “Maduro must go,” and that Washington “does not rule out any option, including the military option” with respect to Venezuela.

The Venezuelan armed forces, which have reiterated their loyalty to Maduro, have been deployed in territorial defence exercises since late January, have blocked road access from Colombia, and are ready to prevent any attempt to bring in the controversial aid shipments.

In the midst of one of the multitudinous street demonstrations that the opposition has held in recent weeks, Guaidó announced that “humanitarian aid is going to come in, no ifs ands or buts. I have given the order to the armed forces to allow it to enter” on Feb. 23.

The unprecedented situation in which Venezuela finds itself, with two supposed presidents, is due to the fact that the opposition and many governments consider invalid the May 2018 elections in which Maduro, 56, was elected for a second six-year term on Jan. 10, and refuse to recognise him as president.

In response, the opposition-dominated National Assembly, considered to be in a state of rebellion by the other branches of government, decided that its president, the 35-year-old Guaidó, would be acting president of Venezuela, starting on Jan. 23.

The border city of Cúcuta in northeastern Colombia has already received 500 tons of medicines and nutritional supplements, while Guaidó announced new collection centers in the state of Roraima in northern Brazil and on the neighboring Dutch island of Curacao, where 90 tons are expected from France, opposition deputy Stalin González told the media.

The aid accumulated so far “consists of emergency medicines and supplements for children under three years of age with severe malnutrition, pregnant or nursing mothers, and the elderly,” Julio Castro, leader of the non-governmental organisation Doctors for Health, told IPS.

The medical aid, according to Castro, “10 percent of what is urgently needed,” for some 300,000 patients, will go to public hospitals and will be distributed by NGOs and religious organisations, with the support of thousands of volunteers responding to the opposition’s call.

Gonzalez said there are already 250,000 volunteers mobilised around the country, including 10,000 health professionals. 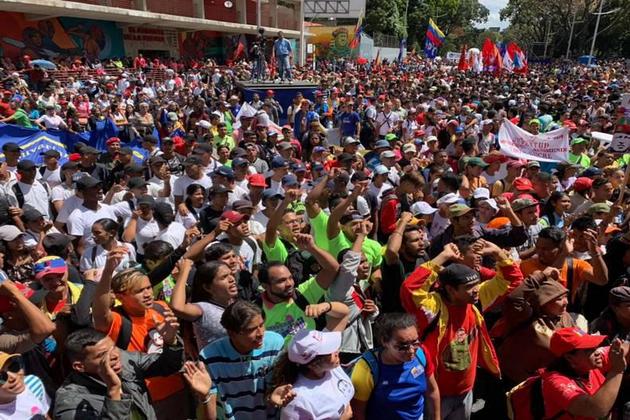 An immediate effect of the bid for aid has been that the government has increased in recent days the delivery of apparently stockpiled medicines and supplies to several public hospitals, according to workers at several hospitals in Caracas and other cities.

People like Natalia Vargas, 39, a bank clerk and diabetes patient, hope that “if emergency help arrives, then other medicines that are scarce because they are imported can come. And when you get them, they’re too expensive.”

“I hope that the politicians and the military will reach an agreement to bring in the aid,” she told IPS at her home in La Candelaria, a traditional lower-middle-class neighourhood in central Caracas.

The international aid initiatives are in response to the social and economic collapse that has occurred in Venezuela since Maduro firste came to power in 2013, unprecedented due to the fact that it happened in an oil-rich country and because of the speed of the collapse, without no natural catastrophe or war.

During the last five years and while some three million people left the country, more than 80 percent of Venezuela’s 31 million inhabitants were left in poverty and unable to acquire enough food and the medicines they need, in addition to hyperinflation since 2017, according to the Study on Living Conditions conducted by three of the country’s leading universities.

In the same period, the economy shrunk to half its size, GDP plunged 56 percent, 210,000 of the 490,000 companies in the country closed, half of the industrial park has been operating at 20 percent of capacity, and local agriculture can barely provide 25 percent of the necessary food, according to the 2018 year-end report of the Fedecámaras central business chamber.

The deficit of medicines in pharmacies remains has stood at 85 percent since last year, the president of the Federation of Pharmacists, Freddy Ceballos, said on Feb. 13.

From the town of Cúa, near the east of the capital, Nadine Cubas, 71, who suffers from hypertension and glaucoma, told IPS that “we are far from the border, that aid may not reach the valleys of the Tuy River, where we are, but if it supplies the people in the west then there is a better chance of getting medicines here.”

Cubas added that “the struggle over the aid makes many local residents here see that there is hope that this time the opposition will bring about change; people now see light at the end of the tunnel.”

What the opposition is counting on is this: if the government lets the aid in, it will show weakness and a division in the support of the military, with an unpredictable domino effect, and if it does not allow it in, it will look like an inhumane clique of leaders whose only concern is to hold onto power, opposition deputies Julio Borges and Juan Miguel Matheus told reporters.

This position is in line with the demand that the entry of aid be a first step for the Venezuelan crisis to lead to elections for a new government, as demanded by the United States, the Lima Group of 12 countries from the hemisphere and the majority of the European Union, against opposition by other governments, such as those of China, Cuba, Iran, Russia and Turkey, or calls for a search for a middle path, issued by Mexico and Uruguay.

Borges and Gonzalez said the humanitarian aid that has accumulated will be followed by more aid as the political game unfolds in Venezuela.

Governments such as those of Argentina, Canada, Chile, France, Germany, Puerto Rico and the United States, plus the Organisation of American States, have offered more than 200 million dollars in assistance.