The Unwanted People of Myanmar: A Tropical Srebrenica in the Land of the Golden Pagodas

GENEVA, Feb 22 2019 (IPS) - The massacre of Srebrenica will enter human history as one of our darkest chapters. From 11 to 22 July 1995, Bosnian Serb military forces massacred approximately 8,000 Muslim Bosniaks. It became the largest massacre committed on European soil since the end of the Second World War. In November last year, the Bosnian Serb military commander Ratko Mladic was convicted of war crimes and of genocide. This constituted relief for the victims of the Srebrenica genocide and a victory for international justice after 22 years. 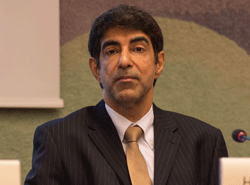 Although the European Parliament denounced this gruesome crime in 1995 stating that “such horrendous crimes must never happen again”, atrocious crimes are once again inflicted on civilian populations. In Myanmar, systematic and grave human rights violations and campaigns of ethnic cleansing brought bereavement to the Rohingyas. As a result of the military clampdown in September/October 2017, more than 700,000 Rohingyas fled to neighbouring Bangladesh to escape the brutal suppression. In the words of the United Nations, the situation in Myanmar constituted “a textbook example of ethnic cleansing”. Or a tropical Srebrenica that we were promised would “never happen again”.

The euphoria that prevailed following Myanmar’s decision to open itself to the world was ambiguous. Although Myanmar’s reforms have brought some measure of change, the systematic human rights violations of the Rohingya did not come to an end. The human rights situation of the Rohingyas in Myanmar is a result of enduring denial of basic human rights. The international community has also remained silent on this issue for too long.

In Myanmar, the Muslim Rohingya population are denied the “right to have rights”. They are denied these rights as non-citizens in their own land. Indeed the 1982 Citizenship law and the 2008 Constitution impede the realization of full citizenship rights for the Rohingya people unless they have lived in the country for the past three generations. They are also being denied the right to enjoy full and unconditional legal protection and fundamental freedoms in violation of international human rights standards.

The disturbing testimonies of the Rohingyans fleeing Myanmar confirm that serious human rights violations are being carried out against the civilian population. Atrocities, massacres, looting and rape of innocent civilians confirm that appalling human rights violations are inflicted on the Rohingyas. Satellite imagery likewise reveal that dozens of Rohingya villages have been razed and burned to the ground in a deliberate attempt to once and for all erase their identity, culture and history.

The violent turmoil in Myanmar in 2012 is a legitimate struggle for justice, freedom and dignity reminiscent of the popular resistance in South Africa to tear down the Apartheid system. The government of Myanmar must review and revoke the 1982 Citizenship law that degrades the status of the Rohingya people and other minorities to at best that of second-class citizens. The gross violations of human rights must come to an end. The discrimination against the Rohingyas cannot continue unabated. In the words of the Roman philosopher Seneca “Injustice never rules forever.”

It was only after the adoption of the 2008 Constitution – which was supposed to herald a new era of democracy – that the UN became more vocal. In 2009, the UN General Assembly and the UN Human Rights Council adopted Resolutions 10/27 and 64/238 respectively to express concern over the situation of the Rohingya ethnic minority. Although a Special Session was held on 5 December 2017 by the UN Human Rights Council on the human rights situation of the Rohingyas, the international response has trailed “one step behind reality.”

In this regard, the Geneva Centre is proud to have successfully campaigned for the holding of a Special Session at the United Nations Human Rights Council on the human rights situation of the Rohingya Muslim population in Myanmar after sending out individual letters to the Permanent Representatives of the members of the Human Rights Council on 12 October appealing for the holding of an urgent Special Session.

Addressing the fate of the Rohingyas is therefore a moral responsibility for world society. Bismarck’s idea of realpolitik must not be left to rear its head letting politics prevail over values and human rights. The efforts of the international community to address the situation in Myanmar will be in vain if their actions are limited to the adoption of resolutions and declarations. The momentum of 5 December 2017 has decreased as other humanitarian crises enter into and exit from the agenda of decision-makers. The planned repatriation of Rohingyas to Myanmar from Bangladesh – as stipulated in the 2017 bilateral arrangement on return of displaced persons from Rakhine state – will hardly be of any value if the central government fails to allow for the safe return and reintegration of Rohingya refugees.

The lack of livelihood options and economic development might trigger another exodus in which the Rohingya community may decide never to return which is the objective pursued by their tormentors. The international community must therefore work for the recognition of the human rights of the Rohingya community to avoid that the world’s most unwanted people becomes the forgotten people of the 21st century.