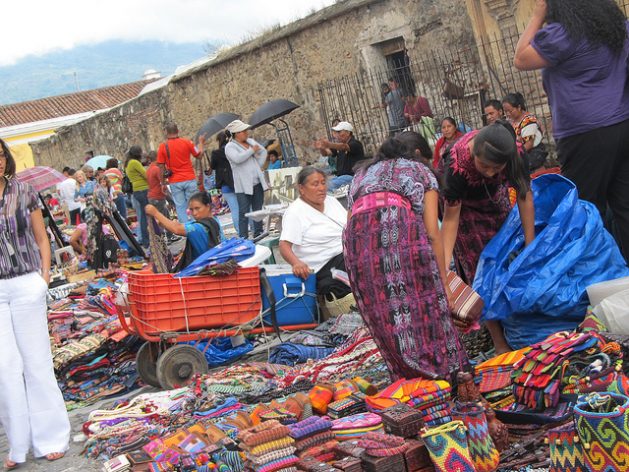 Indigenous women sell handicrafts at a street market in the tourist city of Antigua, Guatemala. Due to the continuing lack of decent employment for women in the region, many of them become street vendors, swelling the ranks of the informal economy. Credit: Mariela Jara/IPS

LIMA, Mar 7 2019 (IPS) - Women in Latin America earn one-fifth less than men for every hour worked, on average – one of the statistics that reflect the continuing inequality in the world of work that makes it unlikely for the region to meet the goal of equal pay by 2030.

Hugo Ñopo, a Peruvian economist with the International Labor Organisation (ILO), told IPS that the gender disparity in employment in the region is also seen in the lower level of participation by women in the workforce, higher unemployment rates and fewer hours of work per week.

“These are inequalities that are accumulating in such a way that when you look at the total labour income generated by society, two-thirds of the total are generated by men and only one-third by women,” he said at the headquarters of the organisation’s regional office in Lima.

"A large part of the labour gap is the result of variables that have to do with conditions such as discrimination, stereotypes, unconscious biases or the time that women and men devote to domestic tasks, which in the end turns out to be a limiting factor for job performance." -- Hugo Ñopo

The “Global Wage Report 2018/19: What lies behind gender pay gaps”, published by the ILO in late 2018, underscores that the gender pay gap is not only explained by variables such as education and experience, but also by cultural factors.

“A large part of the labour gap is the result of variables that have to do with conditions such as discrimination, stereotypes, unconscious biases or the time that women and men devote to domestic tasks, which in the end turns out to be a limiting factor for job performance,” explained Ñopo.

Clara Rivas, 46, is an accountant from Peru. She worked in the civil service until 2017, but difficulties in reconciling her work and family responsibilities forced her to resign.

“The boss in my section frequently assigned me to trips to the provinces,” she told IPS. “I told him I could travel once a month because I had two young daughters, but he said he would not let me off easy just because I was a woman. I asked him to rotate the transfers with my workmates, but he always assigned them to me.”

Eva Machado, spokesperson in Peru for the global grassroots movement International Women’s Strike (IWS), said that Latin American societies take advantage of the female workforce in unequal conditions, while failing to recognise the contribution they make to the economy through domestic tasks in their homes, their care work and community involvement.

“As a formal sector worker with labour benefits, you could say I’m in a privileged position, even though what I have are simply my rights, which unfortunately isn’t the case of the majority of women in Peru,” Machado, who represents a movement that emerged in late 2016, told IPS.

On average, at least 60 percent of employed women in Latin America work in the informal economy, according to data from U.N. Women – a proportion that rises to 70 percent in Peru, according to Machado. Blanca Garcia, 50, sweeps the terrace of a middle-class home in Lima. She works as a housekeeper in several homes in Peru’s capital. Her main motivation is to ensure her 14-year-old daughter a good education, to make it possible for her to have a future job with full rights and opportunities. Credit: Mariela Jara/IPS

In addition, women workers in the region are also in charge of household tasks, which are largely their responsibility, as well as care work, and contributions to their communities or organisations in which they participate, to improve conditions for their family and community, amounting to a triple work load on their shoulders.

“We work more and earn less, so on this Mar. 8, International Women’s Day, we will continue to shout our slogan: ‘If our lives don’t matter to you, produce without us,” Machado said.

The IWS has issued a global call for women to stop working on Friday Mar. 8 for at least an hour to make the impact of their productive and unpaid domestic work felt in countries in both the industrial North and the developing South.

Latin American governments committed themselves to meeting the Sustainable Development Goals (SDGs) of Agenda 2030. But in SDG8, on decent work, target 5 includes achieving equal pay for work of equal value, for men and women, by 2030 – still a distant goal for this region.

In this region of 646 million people, the ILO estimates that 117 million women are part of the economically active population. But they face a labour market with problems that cannot be solved only by laws aimed at equal employment.

The report “Women, Business and the Law 2019: A Decade of Reform”, published on Feb. 27 by the World Bank, highlights the importance of the changes in the world of labour that have taken place in 187 countries over the past decade to address gender discrimination.

An index established in the periodic report based on eight indicators – including wages, pensions, access to employment, resource management, and maternity – shows how Latin American countries have improved, going from an average of 75.4 to 79.09 out of a maximum of 100 in terms of reforms to promote gender parity in the workplace, with 39 legal modifications in this regard.

Measures against harassment at work, access to employment on equal terms, the prohibition of dismissal of pregnant workers or the extension of maternity leave mark the improvements, according to the study, but the problem is that the legislation is not properly enforced.

One key aspect has to do with women’s childbearing years. Hugo Ñopo, a regional economist of the International Labour Organisation (ILO) for Latin America and the Caribbean, at the regional headquarters in Lima, where he analysed the reasons underlying the persistent labour inequality in the region and pointed out that overcoming the problem requires not only public policies, but also cultural changes. Credit: ILO

Ñopo, the ILO’s regional economist, points out that while job interviews are not allowed to include questions on pregnancy or maternity, they are still being asked.

“This goes beyond the legal realm,” he said. “It is a problem that lies at the root, because society puts the cost of motherhood, of our reproductive social function, on women, when given its importance it should be distributed in a more equitable way between men and women.”

So what should be done?

“Part of the task falls to governments in terms of public policies and legislation. But another important part lies in the households, in the equitable distribution of the tasks among the people who live under the same roof,” he said.

This, he stressed, is because “another part of the problem is cultural, and that can be modified, if you take an optimistic view; it just doesn’t happen overnight, it takes a while, but that’s where public policies come in, to sow the seeds of change.”

In sexist societies such as those of Latin America, the old-fashioned idea that household responsibilities are the exclusive realm of women – or domestic workers often hired in exploitative conditions – remains strong.

Blanca García, who migrated from a rural Andean area, is an example of this. She works as a maid in several different homes in Lima, with workdays that often exceed the eight-hour legal limit, in order to support her two children as the family’s only breadwinner.

“Sometimes you get lucky and find an employer who pays you fair wages and respects the eight-hour workday. But generally I start at seven in the morning and finish at seven at night. It’s hard, but I haven’t found any other way to make a living,” said the 50-year-old woman, who earns an average of 20 dollars a day.

On the unfair labour outlook for women in the region, Ñopo stresses that “existing inequalities are too wide for them to be ‘justifiable’. We need a more equitable world so that everyone, women and men, can develop to their full potential,” he concluded.