This article is part of IPS's coverage of International Women's Day, celebrated on March 8. 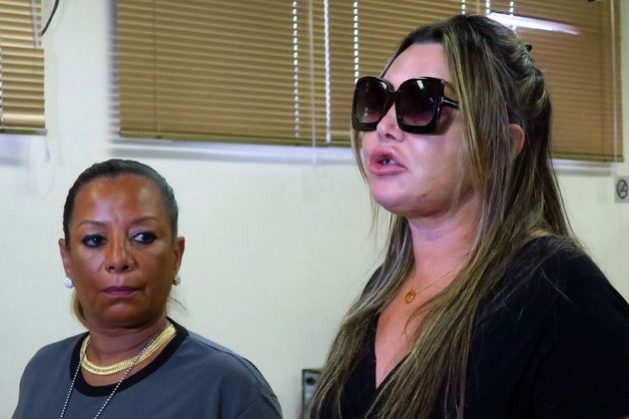 Landscaper Elaine Caparroz, 55, nine days after being brutally beaten in her residence by a man with whom she had an eight-month Internet relationship. Aided by the doorman of her building, she survived with bruises on her entire body, a broken tooth and 60 stitches. Hers is just one of the more high-profile cases of women murdered or assaulted in Brazil, which in 2018 totaled 4.7 million or 536 every hour. Credit: EBC

RIO DE JANEIRO, Mar 4 2019 (IPS) - Crime, a key issue in far-right President Jair Bolsonaro’s election in Brazil, has a dimension that is gaining in visibility and could turn against his government: gender violence.

Elaine Caparroz, a 55-year-old landscaper, was beaten for four hours in the early hours of Jan. 16 in her own home. As a result, she was unrecognisable, lost a tooth and needed 60 stitches.

This was the highest-profile case in recent days in this country of 209 million people, where so far this year, up to Feb. 22, there were 176 victims of femicide and 109 unsuccessful gender-based murders, according to the daily monitoring of cases by Jefferson Nascimento, a lawyer and researcher from São Paulo, based on press reports.

"The new laws encourage women to report the attacks, but many cases of violence remain hidden, because women are afraid, they do not believe in the judicial system, many depend financially on their violent husbands, and there is a lack of effective policies." -- Ana Miria Carinhanha

Caparroz’s attacker, with whom she had an Internet relationship for eight months before taking him into her home, was caught in the act, arrested and charged with attempted femicide, which was specifically defined as a crime in Brazil in 2015, with stiff penalties as it is considered to have aggravating factors.

Other cases of women killed or wounded by gunshots or knives, sometimes in front of their children, have shaken Brazil so far this year, drawing more attention to the statistics and the perception of an increase in gender-based violence in Latin America’s giant.

There were 4.7 million physical attacks in 2018, or 536 per hour, according to the report “The Victimisation of Women in Brazil” by the Brazilian Public Security Forum, in its second edition released on Feb. 26. In the first edition, with data from 2016, there were respectively 4.4 million in total, or 503 per hour.

The data is based on a survey carried out by the Datafolha Institute, which interviewed 2,084 people across Brazil on Feb. 5-6.

“We have laws and protocols, but there is a lack of public policies to deal with violence. Women’s police stations, for example, cover less than 10 percent of Brazil’s 5,570 municipalities, and most are concentrated in the wealthier regions, the South and Southeast,” said Marisa Sanematsu, director of content at the Patricia Galvão Agency, a women’s rights organisation based in São Paulo.

This is a result of the apparent contradiction between the passage of several laws that stiffened the sentences for crimes against women and the rise in gender-based violence.

In 2006, the Maria da Penha Law established harsh penalties for domestic violence and discrimination against women, in addition to creating specific courts and mechanisms to protect and assist victims. The Minister of Women, Family and Human Rights, Damares Alves, inherited functions from the now-defunct secretariats of Policies for Women, Racial Equality and Human Rights. She describes herself as “extremely Christian” and forms part of the ultraconservative religious core of Jair Bolsonaro’s government, which defends the traditional family, rejects “gender ideology” and prioritises the fight against organised delinquency but not against gender violence. Credit: EBC

The law is named after a woman who was left paraplegic by two murder attempts by her then husband in 1983.

The mother of three, now 74 years old, became an activist for women’s rights.

In addition, since 2015, a new law on femicide has classified it as an “atrocious crime” which is an aggravating factor that leads to harsher sentences than other homicides.

“Legislative advances in and of themselves are of little use if they are not accompanied by protective measures, support networks for victims, and actions to ensure that the laws are enforced,” argued Sanematsu.

Because of this, many women are afraid to report the attacks, as they have no protection against possible reprisals, and have nowhere to turn for the defence of their rights, she said.

“The new laws encourage women to report the attacks, but many cases of violence remain hidden, because women are afraid, they do not believe in the judicial system, many depend financially on their violent husbands, and there is a lack of effective policies,” said Ana Miria Carinhanha, a lawyer who works with Criola, an organisation that advocates for the rights of black women.

And the situation is getting worse due to the economic crisis and the consequent scarcity of public resources and also due to the conservative orientation of the extreme right-wing government, which came to power on Jan. 1 with a markedly sexist discourse whose 22-member ministerial cabinet includes only two women.

In addition to prioritising the fight against alleged “gender ideology,” which is supposedly poisoning education and society, Bolsonaro signed as one of his first measures a decree that makes it easier to keep firearms at home and at work.

The government has also pledged to extend to civilians the authorisation to carry weapons in public places, which is becoming more and more widely permitted – as well as criticised – in the United States, in the wake of a spate of school shootings and other mass killings.

“This increases the risk of femicide and also further inhibits women for reporting attacks, out of fear of guns,” which are traditionally used by men and are “a deceptive defence mechanism,” lamented Sanematsu, a journalist who specialises in gender violence.

Millions of women poured onto the streets in demonstrations ahead of the October elections, under the slogan #EleNão (#NotHim) to prevent the triumph by Bolsonaro, known for making misogynistic, racist and anti-democratic statements during his years as a lawmaker, between 1990 and 2018.

The protests failed to block the election of the former army captain, although a lower percentage of women than men voted for him.

It is now clear that for the government the priority is the fight against organised crime, especially drug trafficking, and corruption. Its approach to the question of domestic violence, “is still unclear, which is a bad sign, even though society considers it an important problem and is demanding solutions,” said Sanematsu.

For this reason, women’s rights groups are organising protest marches throughout Brazil on Mar. 8, International Women’s Day, against femicide and other sexist violence, general violence, and the expansion of access to firearms.

According to a report by the Brazilian Public Safety Forum, 42 percent of attacks on women occur in the home, compared to 29 percent on the street.

Black women are the most frequent victims. The survey found that 28.4 percent of black women suffered physical aggression in 2018, against 27.4 percent of all Brazilian women over 16 and 24.7 percent of white women.

The “structural racism” in the country also means that more black people in general are murdered, and that black women are less covered by public policies and earn lower wages, said Carinhanha.

That is why Mar. 8 will also be marked by demonstrations by black women and campaigns against racism, she announced.

“The new government promotes institutional and personal violence, and is aggressive and intolerant of civil society organisations,” and in response society must mobilise, she argued.

“Women are the great force against violence and for equality in Brazil today, along with the new generation of young people,” said historian Daniel Aarão Reis, a professor at the Federal University Fluminense, in Niterói, a city near Rio de Janeiro.

In his opinion, they should avoid the fragmentation that occurred in the United States, where the recent growing female protagonism has been marked by “identity patterns separating black and white women.”

He also warned that in the early days of Bolsonaro’s government, women’s advocates took sometimes contradictory actions and decisions, and said they should be “more cohesive” and more forceful now that the opposition and popular protests are growing.