RAKHI KUMAR is a senior managing director and head of ESG Investments and Asset Stewardship at State Street Global Advisors.*

Across the investment industry, asset owners and asset managers push to enhance gender diversity at all leadership levels 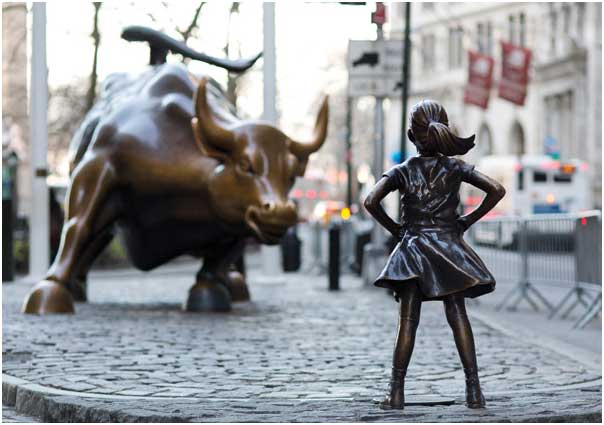 The “Fearless Girl” statue in the heart of New York’s financial district serves as the public face of efforts to raise awareness about the importance of gender diversity in corporate leadership.

WASHINGTON DC, Apr 4 2019 (IPS) - Over the past decade, there has been mounting evidence that greater levels of gender diversity can have a positive impact on corporate performance and economic growth.

Most relevant for investors, MSCI (American financial service provider) found that companies with strong female leadership at the board level generated a return on equity 36.4 percent higher than companies without a critical mass of women on their boards.

For both economic and social reasons, there has been a surge in interest from investors about how they can encourage gender diversity on corporate boards, in the C-suite, and at other levels of management.

To support these efforts, State Street and asset managers of all sizes are developing new tools that empower investors to promote gender diversity at the companies in which they invest.

In March 2017, we placed the “Fearless Girl” statue in the heart of New York’s financial district to serve as the public face of our efforts to raise awareness about the importance of gender diversity in corporate leadership. This campaign, however, is about much more than raising awareness.

As shareholders, we cast votes on candidates to a company’s board of directors and other important issues facing the company. Through this proxy voting process, we have voted against nominees to all-male boards that are not taking adequate steps to add female representation.

In addition, we are engaging directly with companies about diversity and other thematic environmental, social, and governance (ESG) topics and publishing thought pieces to educate boards about effective pathways to increasing diversity at all levels of the organization.

Since March 2017, we have called on more than 1,200 companies with no women on their boards to take action. We are pleased that more than 300 of those companies have now added a woman to their boards and 28 more have committed to doing so.

But we know there is more work to be done. In September 2018, we announced an escalation of our board diversity voting guidelines.

Beginning in 2020 in the Australian, UK, and US markets and in 2021 in Canada, Japan, and continental Europe, we will vote against the nominating committee’s entire slate of nominees if a company does not have at least one woman on its board and has not engaged in successful dialogue with us on the matter for three consecutive years.

Why are we giving companies three years to implement changes that we believe would have an immediate positive impact for investors before taking escalated voting action?

Our goal is to ensure effective independent board leadership, which involves achieving the right skill sets as well as a diversity of views. We realize that achieving this can’t happen overnight and that adding qualified candidates should be a thoughtful process that can take upward of a year.

While having only one female director on a board shouldn’t be seen as the end of a company’s diversity journey, we believe that adding a female perspective to the boardroom is an important first step.

The Fearless Girl campaign is about changing the mind-set of boards on diversity—moving the conversation from “Why do we need gender diversity?” to “Why don’t we have board diversity?”—and we believe that adding even a single female director helps to shift this mind-set.

Diversity is a relevant issue for all companies regardless of sector, market, or size. We found that many large companies today are making a concerted effort to include women on their boards, but among smaller companies the lack of female representation on boards continues to be significant.

Most boards lacking gender diversity cite a limited pool of suitable female director candidates as a primary obstacle. However, we believe that current practices for nominating directors, as well as behavioral biases that continue to undervalue the contributions of women in the workplace, are among the leading obstacles. As an example, some boards require that all director nominees have CEO experience.

Fortunately, these roadblocks and biases can be overcome. One best practice commonly used by companies with higher levels of board diversity is to ensure that every candidate pool of board nominees includes diverse candidates.

Also, we are calling on companies to monitor and disclose the level of gender diversity not only on their boards but at all levels of management. We believe this increased transparency will help create a stronger pipeline of qualified female board candidates.

Inspired by a conversation we had several years ago with a client about how to advance the gender equity discussion and capture potential excess return from companies with gender-diverse leadership, State Street created an index that allows investors to achieve the dual purpose of impact and return.

Launched in March 2016, the SSGA Gender Diversity Index is designed to promote gender diversity and harness the potential elevated returns of companies with greater gender-diverse leadership. The index can even be combined with a charitable component to contribute a portion of the advisor’s revenue to support charities that focus on science, technology, engineering, and math programs for young women.

For decades, asset owners have sought to effect change by using negative screening, which means avoiding investing in companies whose practices don’t align with the investor’s personal values or companies with poor ESG ratings. Increasingly, many investors are moving beyond this exclusionary approach and embracing ESG-focused investing as a tool for potentially improving a portfolio’s risk-adjusted returns.

One of the biggest barriers to ESG integration is a lack of reliable and uniform data about a company’s practices and their impact on financial performance. We believe that our stewardship initiatives calling on companies to improve disclosure about gender diversity at all levels of management should play an important role in giving investors the information they need to integrate gender considerations into their analysis of a company.

We are pleased to observe the growing awareness of the benefits of gender-diverse leadership across the investment ecosystem—from asset owners to asset managers to corporations themselves.

According to the Wall Street Journal, as of March 2018—the one-year anniversary of the launch of Fearless Girl—asset managers and owners controlling more than $13 trillion had joined us in making gender diversity a stewardship priority.

But this is just a start. At State Street, we believe that companies throughout the asset management industry should continually look for new ways to use their expertise to further empower investors to promote gender diversity at all levels of leadership around the world.