Kenya and Ethiopia Cross-Border Initiative: A Move Towards Sustainable Peace 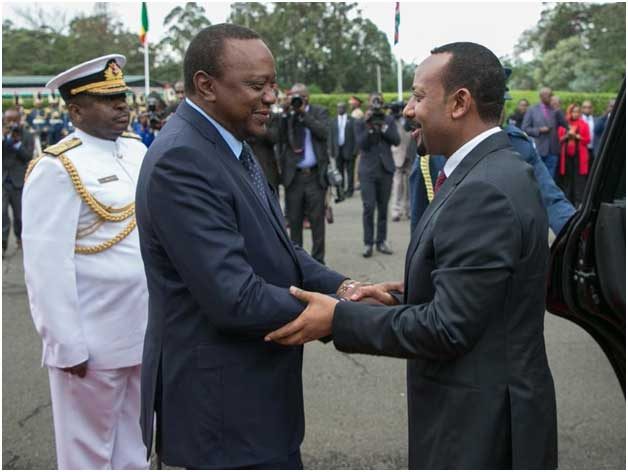 NAIROBI, Kenya, Apr 29 2019 (IPS) - Many years of internecine conflict is being replaced by a new narrative of peace along the Kenya-Ethiopia border. Communities that once fought each other are now dreaming of a joint journey towards a better future.

Diverse communities constitute the inhabitants of the border area, a vast swathe with great potential to advance beneficial integration between the two countries. But niggling rivalries and violent conflicts have persisted for years, constraining any meaningful cross-border socio-economic activities.

The conflicts have been driven by a plethora of problems – scarcity of pasture & water, cattle rustling, politics of ethnicity and political/administrative boundary disputes. With such clashes being the dominant motif in the region, leaders from the two countries have become frustrated by adverse impacts on trade, not just along their border but on wider regional integration and development between the two countries.

Kenya and Ethiopia provide a market of about 150 million people. While Ethiopia is known for its agro- based industries such as leather and coffee, Kenya has a relatively advanced manufacturing and tourism sectors, with collaboration between the two capable of developing strong regional value chains.

It is this dormant strength and potential that led the governments of Ethiopia and Kenya, in partnership with IGAD, the European Union and the United Nations, to establish an integrated cross-border initiative (Video) to foster peace and sustainable development around Marsabit County in Kenya and Borana/Dawa Zones of Ethiopia.

While the historic agreement between Ethiopia and Kenya was witnessed by the leaders of the two countries at a high-profiled event in Moyale, a recent peace conference held in Addis Ababa from 17 to 18 April 2018 was a clear sign that the serious business of facing up to the root causes of violent conflict and vulnerabilities is truly on.

The meeting was attended by representatives of national and local governments of Ethiopia and Kenya, IGAD, EU, UN in Kenya and Ethiopia, cross-border peace committees, traditional community leaders and youth & women’s groups. Heart-on-sleeve discussions dominated the two-day meeting, with the resolutions indicating a clear consensus on the respective areas of responsibility towards lasting peace.

President Kenyatta of Kenya and former Prime Minister Desalegn of Ethiopia lay the foundation for the Kenya-Ethiopia cross-border programme in the border town of Moyale on 07 Dec 2015. Credit: @UNDP Kenya

A clear point of convergence was that the challenges facing the communities know no borders, but also that they will not be resolved through solutions of the past. The need for a wider approach to the issues was brought forward, to leverage on non-traditional actors such as the private sector, civil society and academia.

The spirit of the regional conference is in line with UN Secretary General Mr Antonio Guterres’s vision for the Horn of Africa which underscores the importance of prevention, resilience building and reduction of vulnerability.

The priority now is to bring direct benefits to borderland communities. Under the leadership of the national governments and IGAD, the United Nations and the European Union will support concrete initiatives to reinforce stability and realise the economic potential of these areas. Both organizations have committed to support a prosperous, peaceful and secure region, based on mutual values such as human rights, good governance, reduced poverty and peaceful coexistence, the rule of law, that aims at leaving no one behind.

The European Union is spearheading support for cross-border areas in the Horn of Africa through a €68 million programme covering the entire length of the Kenya-Ethiopia border, incorporating south-west Somalia and also supporting the cross-border area between Western Ethiopia and East Sudan. Through providing investment in peace-building, socio-economic development and regional cooperation, the programme aims to transform borderlands into more prosperous and stable areas where communities have a sense of belonging and prospects for a better future.

The bold reforms going on in the UN will see not only the UN family delivering as one but delivering as one across borders. We are already seeing UN country teams that adapt more closely to the priorities and needs of each country, enabling the leveraging of strengths across regions and specialized agencies. This will facilitate the establishing of new architecture adapted to trans-boundary priorities and realities.

One product of that new paradigm is the recent meeting that brought together participants from Ethiopia, Kenya, Uganda, Tanzania and Somalia to develop plans for ending cross-border female genital mutilation (FGM).

President Uhuru Kenyatta talked about turning this region into a “Dubai” of the future. That vision is possible given the winds of goodwill blowing over the region. This is having a transformative shift towards peace for communities along the border and prosperity between the neighboring countries.