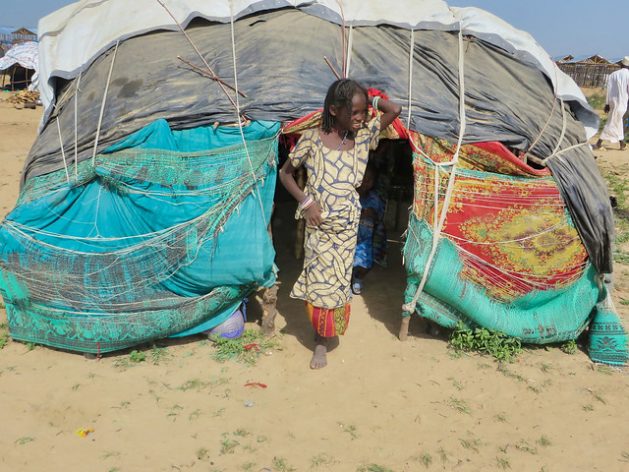 A young girl whose family fled the Boko Haram insurgency stands in front of a tent in a camp for internally displaced persons in Maiduguri, Nigeria. Boko Haram has abducted thousands of girls and forced them into unwanted marriages and enslavement. According to the International Rescue Committee (IRC), less than one percent of humanitarian aid is spent on combating gender-based violence in crises. Credit: Sam Olukoya/IPS

UNITED NATIONS, May 27 2019 (IPS) - It’s time to end sexual and gender-based violence once and for all, participants of a two-day conference said.

The conference, which brought together representatives from 100 nations and over 200 organisations and SGBV survivors, aimed to mobilise political and financial commitments as well as strengthen effective and multi-sectoral SGBV prevention and response.

“We cannot, and must not, pretend these atrocities are not taking place. Sexual and gender-based violence tears apart the very fabric of society, and inflicts lasting wounds on individuals and whole communities,” said Norway’s Prime Minister Erna Solberg.

“Now is not the time to stand idly by. Now is the time for action,” she added.

Worldwide, more than one-third of all women have experienced physical or sexual violence in their lifetime. While boys and men are also affected, the risk is much higher among women and girls and is particularly exacerbated in humanitarian crises. 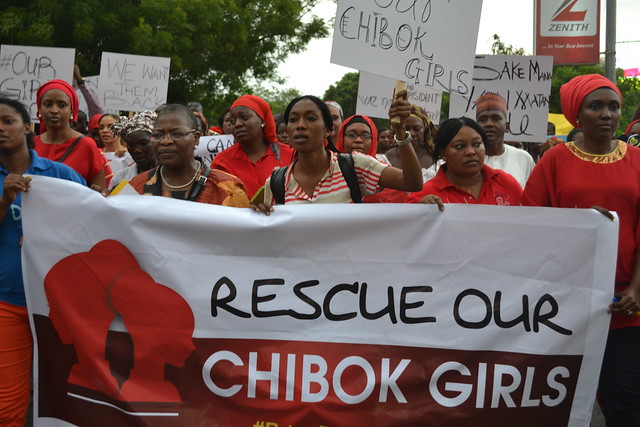 In Nigeria, while the kidnapping of the Chibok school girls gripped international headlines in 2014, Boko Haram has and continues to kidnap women and girls for the purposes of sexual slavery and forced marriage. In this dated picture, Nigerians gathered at Unity Fountain, in Nigeria’s capital, Abuja, on Apr. 30, 2014 to call on the country’s government to act quickly to find the 276 schoolgirls who were kidnapped from Chibok secondary school in northeast Borno state on Apr. 14 by Islamist extremist group Boko Haram. Credit: Mohammed Lere/IPS

In Nigeria, while the kidnapping of the Chibok school girls gripped international headlines in 2014, Boko Haram has and continues to kidnap women and girls for the purposes of sexual slavery and forced marriage. A report by the Henry Jackson Society found that Boko Haram members would forcefully impregnate women in order to produce the “next generation of fighters.”

Nadia Murad, who was recently awarded the Nobel Peace Prize and is the UN Office on Drugs and Crime’s Goodwill Ambassador, was among thousands of Yazidi women who were kidnapped by the Islamic State.

While women like Murad are leading the fight against SGBV and are often the first responders in a crisis, funding is woefully inadequate.

According to the International Rescue Committee, less than one percent of humanitarian aid is spent on combating gender-based violence in crises.

However, as communities lose access to basic services and needs such as shelter, healthcare, and income, financial support and provision of services is of the utmost importance.

In 2019, an estimated 140 million people are in need of humanitarian assistance. Of these, approximately 35 million are women and girls of reproductive age.

Participants in ‘Ending Sexual and Gender-Based Violence in Humanitarian Crises’ conference reiterated the importance of listening to survivors to help guide action.

“When I meet survivors I ask them what could have been done to prevent what happened to you, and they tell me things like a stove. In South Sudan, [they said] we have to go out of the protected civilian site to go fetch wood and that’s when we get raped,” said UN Special Representative of the Secretary-General on Sexual Violence in Conflict Pramila Patten.

In South Sudan, at least 175 women and girls experienced sexual and physical violence between September and December 2018 alone. Of these cases, 64 were girls, some as young as eight years old.

Researchers from the UN Mission in South Sudan and the Office of the UN High Commissioner for Human Rights, found that most of the victims were attacked on roads as they traveled in search of firewood, food or water, commodities which have been limited since the start of the conflict in 2013.

One woman recounted her experience after being raped on three separate occasions while walking to or from food distribution sites, stating: “We women do not have a choice…if we go by the main road, we are raped. If we go by the bush, we are raped…we avoided the road because we heard horrible stories that women and girls are grabbed while passing through and are raped, but the same happened to us. There is no escape—we are all raped.”

“We really need to listen to survivors. They have both a role to play in prevention and response,” Patten added, pointing to the need to address root causes of structural gender inequality and discrimination.

With regards to response, it is essential for survivors to receive health and psychosocial services as well as a safe space to heal, many said.

However, an increase in funding for SGBV prevention and response is sorely needed as well as support for local women’s organisations who are at the forefront of crisis response.

Recently, 350 Somali women leaders jointly called for zero tolerance for gender-based violence and the urgent passage of the Sexual Offences Bill which would be the country’s first dedicated SGBV-related legislation.

“We need to address the call for justice for survivors, we need to support women working closely with survivors,” said Somali Minister of Women and Human Rights Development Deqa Yasin Hagi Yusuf.

“We will return from this conference with even more energy to strengthen our legal and institutional framework to tackle SGBV,” she added.

The UN Population Fund’s Executive Director Natalia Kanem also stressed how crucial partnerships are and pledged to follow through with the 2016 World Humanitarian Summit’s commitment to provide 25 percent of funding to local and national responders by 2020.

“Support women and girls to rebuild their lives, to regain their dignity, and to feel safe and secure amidst crisis…Let the woman decide, let the girl decide,” Kanem said.

By the end of the conference, 21 donors committed 363 million dollars over the next two years.

“We are at a turning point. We have done something new, we thought out of the box, and I think we have all given something out of the ordinary. We all wanted this to work and we did,” said Minister of Foreign Affairs of Norway Ine Eriksen Søreide in her closing remarks.

“I am absolutely confident we will be able to sustain this momentum…we have the majority, and we can make the changes…now the hard work starts,” she added.