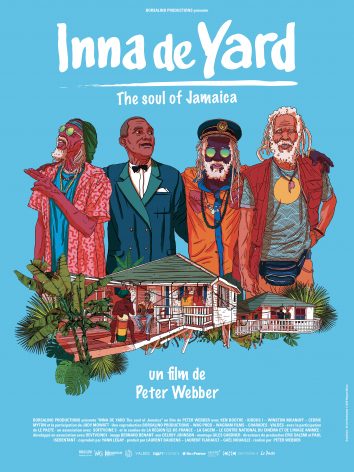 KINGSTON/PARIS, Jun 24 2019 (IPS) - Dogs barking in the distance. Birds chirping nearby. A man walking through the mist, surrounded by lush vegetation. A distinctive vibrato singing “Speak Softly, Love” over it all.

So begins Inna de Yard, a documentary that can safely be called a love poem to reggae music, or the “soul of Jamaica”, as the film is sub-titled with an obvious play on words.

Directed by Peter Webber (whose first feature was the acclaimed Girl with a Pearl Earring), the documentary comes at a timely moment: reggae was inscribed last November on the Intangible Cultural Heritage List of the United Nations Educational, Scientific and Cultural Organization (UNESCO).

Before opening across Germany on Jun. 20, the film was screened in Paris at the U.N. agency’s headquarters to a full house of spectators, many of whom seemed to know the artists and the songs. Several stood up to dance when the musicians performed after the projection.

Inna de Yard takes us into the lives of pioneer reggae musicians who have come together to record music in a hilltop studio. This is a weathered, old house that offers breath-taking views of the capital Kingston. It is filled with stacks of vinyl records spilling out of their decaying jackets, while an ancient piano sits on the porch.

The man walking through the mist at the beginning is a piano tuner, who tells viewers that the instrument is sometimes infested with insects, but he needs to get it ready for the musicians. We watch as he takes bits of wire and other objects to do just that.

Then the music begins in earnest. We are introduced to the artists – Ken Boothe, Kiddus I, Winston McAnuff, Cedric Myton, The Viceroys and Judy Mowatt – as Boothe’s vibrato accompanies spectacular aerial shots of the landscape.

Kiddus – who appeared in the 1978 cult film “Rockers”– explains in his deep, pleasant voice that the project is “an amalgamation of elders playing acoustic music”, and McAnuff adds that the aim is to capture the music “in its virgin state”.

Mowatt, looking like an urban goddess in her patterned robe, says that the house up in the hills “felt like heaven” when she first visited.

In a previous era, Mowatt performed with the I-Threes, the trio of backing vocalists for Bob Marley and the Wailers. But beyond her presence, the extended Marley clan is not in focus here. This documentary is about the other trailblazers and the source of the music.

With footage from the 1960s and 1970s, the documentary takes us to the beginning of ska and rocksteady, showing how the music developed, influenced by American rhythm and blues.

She says that reggae “talked about the realities of life” and that “all of Jamaica was living the songs that were being sung”– songs about political violence, hardships, and police repression of Rastafarians, for instance. It was the “golden age” of the music.

The documentary gives each of the artists space to reminisce even as it describes their lives now. “We miss everything about those days,” says Cedric Myton, a playful, lively spirit in the film who said he’s “going up the ladder” at 70-plus years old.

During one of the film’s most memorable scenes, we see him heading out in a boat and joking around with fishermen as he sings “Row, Fisherman, Row”, in his iconic falsetto. The film cuts from the sea to the studio in the hills, to Myton enlightening viewers on the origins of the lyrics.

Like many of the others, Myton started out in the music business with what seemed a bright future, but troubles in the United States – related to “herb charges”– meant he couldn’t perform there. In addition, all the musicians have had experience with unscrupulous record producers, or “thieves” as Myton calls them.

“We’re not giving up because we know there are better days ahead,” Myton says. “But financially it’s been a struggle.”

Some of his peers have had more personal struggles. McAnuff lost his son Matthew, also a singer, in 2012, and his description of the “senseless” death is among the most moving sections of the film. So is the story of younger musician Derajah, who lost his sister to gun violence. We see them working through their grief via the music.

The Inna de Yard project puts the pioneers in contact with younger musicians who perform with them in the studio and on tour, and the film profiles these artists as well. “We learn from the younger guys and they learn a lot from us,” Kiddus comments.

Mowatt also records with two younger singers, the fiery Jah 9 and her colleague Rovleta. Speaking passionately, Jah 9 gives an introduction to the history of the island and the role that the Maroons and their legendary leader Nanny played in fighting against slavery.  Then she joins Mowatt and Rovleta in the studio to sing Mowatt’s “first solo anthem”– an intense track called “Black Woman”.

“It’s a love splash,” Mowatt characterises the session, describing the affection and solidarity between the three.

Accompanying individual musicians, the film also takes us through unspoilt areas of Jamaica – waterfalls, natural diving pools, forested Maroon country – but it doesn’t shy away from showing poor sections of the capital Kingston where the music was born, or the environmental degradation of some beaches. We also get a glimpse into eroticised dancehall culture, during a segment in a bar.

Film director Webber was, however, not interested in showing scenes “that would cause eyes to pop in the West,” as he said in an interview following the screening in Paris. Webber added that the restraint in filming certain aspects of the culture was “deliberate” as he didn’t “feel the need to labour the point”.

Because of this approach, viewers get a sense of the love of and respect for the music, unlike some sensationalist portrayals of Jamaican arts.

Webber said he was first introduced to the island’s music as a teenager in London and became “a huge fan of reggae”. Years later, he was working with French producer Gaël Nouaille on a Netflix project when Nouaille told him about the Inna de Yard musicians and recordings.

“I had never been to Jamaica before, partly because I had a Jamaica in my head, and I knew that if I got on a plane, I would have a touristic experience and it wouldn’t live up to what I imagined,” he said. “I didn’t want to spend two weeks on a beach in Negril. But this was a different way to go.”

When he got to the island and met the musicians, he initially wasn’t sure there was a feature film to be made, and he questioned whether he could produce a documentary that would “appeal to a more general audience” than traditional fans of reggae or dub.

He said it was also important to meet younger musicians. “I was wondering: Are these guys like the last of the Mohicans?”

Asked why he was the one to make this film, Webber said: “I did it because of my love and enthusiasm and because I had an opportunity to do it. You may wonder if the world needs another middle-aged white man dropping into Jamaica, but I see myself as a medium. I’m a channel, and I basically put my technical skills and my creativity at their disposal to tell their story. It’s not a film of cultural appropriation.”

He said the documentary developed based on the “spine of the story” – the musicians recording an album “up in this house in the hills”.

The house is indeed at the centre of the documentary, but from there, Webber and the musicians take us on a journey: back to the past, around the island, to concerts in Paris, and into the soul of reggae and Jamaica. And Webber does so with an artist’s touch, reflecting his background as a student of art history.