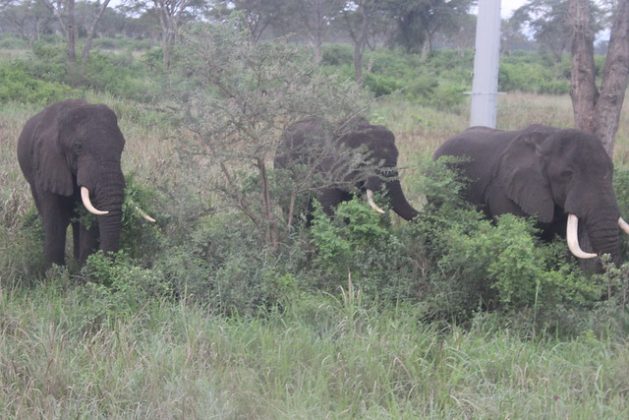 Elephants in an area infested by the invasive sickle bush. The Uganda Wildlife Authority fears that the management of the shrub could be a challenge as the plants rapidly colonise grasslands in the Queen Elizabeth National Park, the country's most diverse park. Credit: Wambi Michael/IPS

KASESE, Uganda, Jun 12 2019 (IPS) - As climate change leads to increased temperatures in East Africa, a thicket of invasive thorny trees with the ability to withstand harsh climatic conditions have begun threatening Uganda’s second-largest park, home to a rare breed of tree climbing lions and one of the highest concentrations of primates in the world.

The Queen Elizabeth National Park forms part of the Greater Virunga Landscape, considered the richest part of the African continent in terms of vertebrate species. The park is Uganda’s most diverse and boasts 5,000 species of mammals, including: 27 primates such as chimpanzees, red-tailed and monkeys, and baboons; birds; amphibians; reptiles; hippos and elephants.

But conservation experts at the Queen Elizabeth National Park are fighting to stop the spread of Dichrostachys cinerea, commonly known as sickle bush.

There is a fear that the further spread of of the shrub, which has a long tap root and various lateral roots that make it difficult to remove, could further place at risk the already endangered species that exist here. A recent  Intergovernmental Science-Policy Platform on Biodiversity and Ecosystem Services (IPBES) report found that there is massive loss of biodiversity globally that could “undermine human well-being for current and future generations,” according to Sir Robert Watson, the outgoing chair of the IPBES.

Though not new to the country or the region, the invasive plant, which is native to South Africa and known for its medicinal uses, has begun spreading rapidly across the park, taking up in recent years an estimated 40 percent of the almost 2,000 square kilometres that the park covers.

Edward Asalu, the chief warden here, told IPS that the spread of these thickets was affecting animal settlements in this ecologically diverse part of the country.

“This issue is being studied but we know that it is largely linked to climate change,” he said, alluding to the increased temperatures in the country. He added that higher levels of carbon dioxide in the atmosphere also contributed to the fast spread of the sickle bush.

Robert Adaruku is a tour guide with the Uganda Wildlife Authority (UWA) and has noted that increased temperatures have affected the growth of the sickle bush.

“As the temperature goes high, such kinds of plants like the sickle bush are able to survive in a hotter environment are able to expand. Because the weather or environment will be favouring their expansion,” he told IPS. 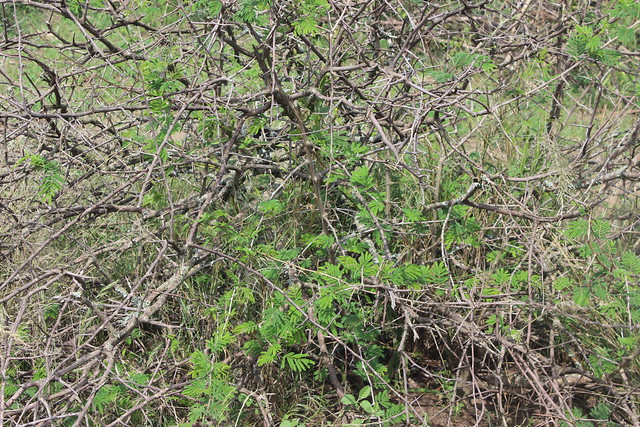 The sickle bush and its recent rapid growth due to increased temperatures has led it to become the latest threat to Uganda’s wildlife conservation efforts. Credit: Wambi Michael/IPS

Thicket drives away animals
The spread of the sickle bush is evident as one drives along the road overlooking the Kazinga Channel, a 32 kilometre stretch of water that joins Lake George and Lake Edward. The channel has previously been considered the ideal spot to view game.

A lonely male elephant is spotted in the early afternoon under a thicket of sickle bush. There is no grass underfoot.

Asalu told IPS the thickets were not easily penetrated by most animals and that “grazers like antelopes, warthogs and buffalos are avoiding those thickets because they can’t find food under there.”

“We have areas which were grasslands but are now being taken over by thickets. Animals, especially the herbivores, like open areas where they can be able to see the carnivores trying to eat them. That is why you cannot find them in area colonised by the sickle bush,” Asalu explained.

Adaruku explained that he first noticed the sickle bush in the park way back in 1997. “The sickle plants were there but on a very small scale. As time goes on it has been able to expand and colonise this area.”

Sickle bush spreading rapidly across Africa and beyond

But it is just not this park that the sickle bush is taking over. Asalu confirmed that Tanzania’s Randilen Wildlife Management Area also recently had to deal with the spread of the sickle bush.

Quoting a study by the Centre for Agriculture and Biosciences International (CABI), a non-profit inter-governmental development and information organisation, Asalu said that Dichrostachys cinerea spreads very fast because it can produce up to 130 shoots from the mother stem.

Studies from West Africa have found that the sickle bush is mostly found in warm, dry savannahs but it can grow in more than three climate groups.

CABI said the subspecies spreading in East Africa is thought to have originated in countries such as Algeria, Cameroon, Ghana, Kenya, and South Africa and is spreading all over the world.

“Dichrostachys cinerea has a high reproductive rate, meaning that they produce many seeds throughout the year. Although not all offspring are successful, the plants that do establish themselves can typically expect a long lifespan due to their tolerance to natural disturbances like fire, drought and pests,” reads part of a 2017 report by CABI.

It added that the ability by the sickle bush to prosper on nutrient-poor soils and disturbed areas made it very adaptive and resilient in its native region of South Africa.

A 2017 study in the journal Nature Communications found that alien invasive species, like the sickle bush, have the ability to expand rapidly at higher latitudes and altitudes as the climate warms, out-pacing native species. The park is estimated to be 914m above sea level, while Uganda is about 140 kms above the equator.

Geofrey Baluku is a part-time tour operator around Kilembe and Kasese, the areas alongside the Queen Elizabeth National Park. He is also concerned about the spread of the sickle bush.

“It is a serious problem. What will happen to this park if all the animals go away?” Baluku said in an interview with IPS.

He told IPS that the sickle bush is not entirely new to the area but the rate at which it is expanding was.
“We have used those same plants to treat some diseases. It is very good soothing to tooth ache.
“But …even elephants don’t eat their leaves. Other small animals don’t want to stay in areas colonised by sickle bush so they move to other areas, including where there are human settlements,” Baluku said. 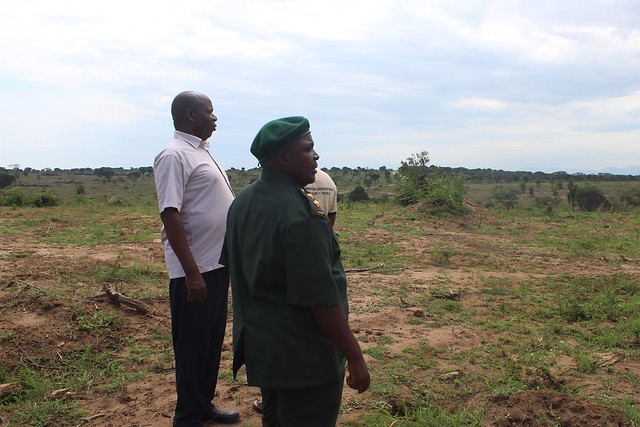 Uganda Wildlife Authority wardens at one of the areas formerly colonised by the sickle bush. The authority has undertaken restoration efforts since July to clear the Queen Elizabeth National Park of the shrub. Credit: Wambi Michael/IPS

Dr Peter Baine, a research officer at Uganda’s invasive species research unit, told IPS that the sickle bush forms a canopy in a colonised area, releasing chemicals that kill the grass underneath.

“It is quite problematic to other plants because of its ability to spread fast, grow fast, disperse numerous seeds, and the seed’s ability to last in soil up until a year,” he said.

Baine did not rule out the fact that its rapid spread could be linked to climate change. He told IPS that invasive species and climate change are two of the primary factors that alter ecological systems.

He said the National Agricultural Research Organisation and UWA were conducting studies to understand the interaction between climate change and the sickle bush for a possible management plan to fight the problem.

The UWA has in the past burnt the sickle bush but discovered that the tree would sprout again after a few weeks.

Since July, the authority has embarked on a new restoration effort, involving the uprooting and burning of the plants in colonised areas.

About six hundred hectares of sickle bush had been uprooted by May when IPS visited the Queen Elizabeth National Park.

Asalu told IPS that there remains a huge challenge ahead because uprooting and burning the sickle bush requires huge financial resources that are not readily available.

But in the meantime the current efforts for eradication are making a difference. IPS saw a number of animals, including buffalo and bushbucks (African antelopes), in parts of the restored area.

*Writing with Nalisha Adams in Johannesburg