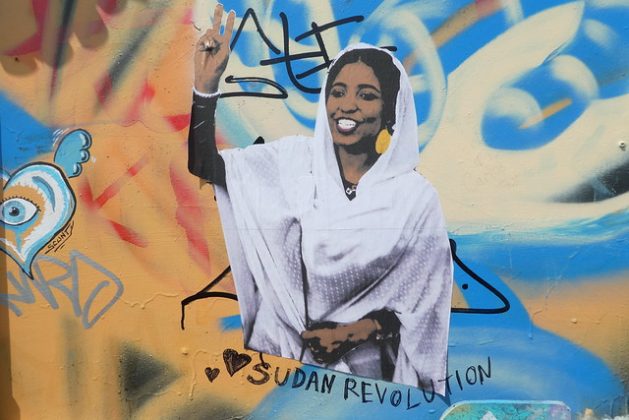 NAIROBI, Jul 16 2019 (IPS) - It is an image of resistance that went viral across the world. Alaa Salah, a young Sudanese student, dressed in a traditional white thobe standing atop a car with an enthralled crowd surrounding her as she and they boldly chanted Al-Thawra—Arabic for revolution.

It is what many remember of the peaceful ouster of Sudanese dictator Omar al-Bashir and one of Africa’s most towering dictatorial regimes.

Sudan had finally broken away from an era characterised by media censorship and harassment, or so the story goes.

“At that very moment, we all believed that this was the beginning of Sudan’s best of times. In 30 years, very few could testify to anyone so boldly challenging the system and living to tell the story,” Ali Taban, an independent Sudanese journalist, tells IPS.

“For many days afterwards, we were in this magical moment and journalists were there to chronicle every step of it. Not anymore. We are now more afraid of being silenced with violence than ever before,” says Taban.

As the Transitional Military Council (TMC) slowly tightens its grip on Sudan, eerily filling the gap left behind by al-Bashir, hope is quickly turning into a nightmare. In June, as troops violently broke up a week-long peaceful sit-in killing at least 100 protestors, the world remained silent in horror.

Even worse, to isolate Sudan and put a lid on a plethora of ongoing human rights violations, the TMC cut internet services for over a month. The Council’s spokesman General Shams al Din Kabashi went on record to justify the internet shutdown as a matter of safeguarding national security.

However, the internet was restored earlier this month through a court order, but the TMC is reportedly appealing the decision.

During the blackout, Sudanese pleaded with the world to be its voice as the country slid into an information black hole. They were not disappointed. The Twitter hashtag ‘IAmTheSudanRevolution’ became the most trending topic in Kenya, Canada and the United Kingdom.

July 14th:
🇸🇩The next round of negotiation between TMC and FFC has been postponed to July 16
🇸🇩The TMC is trying to legally contest the restoration of internet services
🇸🇩the SPA has released the details of the agreement so far#IAmTheSudanRevolution#SudanUprising#SudanProtests pic.twitter.com/6jN07OrkoF

Marwa Abdelrahim, a lecturer at Ahfad University for Women in Khartoum’s twin city of Omdurman is still reeling from this turn of events. “[The] internet shut down should have never happened. It all reminds us of a past that we would like to forget as we build a new Sudan,” she tells IPS.

Sudan is ranked 175th out of 180 countries in the 2019 World Press Freedom Index conducted by Reporters Without Borders, an international media watchdog.

Unfortunately Sudan is in good company as press freedom and access to social media is under siege in an increasing number of African countries.

Neighbouring East Africa has, for instance, shown an alarming aversion towards independent media.
“The situation is most alarming in Tanzania. We have watched in shock as Tanzania joins countries such as Central Africa Republic, Zimbabwe, Mauritania, Democratic Republic of Congo and Liberia as the countries with significant deterioration in press freedom,” Mathias Chiza, a regional media expert based in Dar es Salaam, Tanzania, tells IPS.

Tanzania passed the Electronic and Postal Communications (Online Content) Regulations Act, commonly known as the internet law, in 2018. Media experts like Chiza say it is the most punitive press and information sharing related law yet.

The Act requires payment of 900 dollars to register a blog or news website. It is no wonder that Tanzania dropped down 25 positions in just one year to rank 118th out of 180 countries in the 2019 World Press Freedom Index.

Similarly, punitive laws exist in Kenya and Nigeria in the form of cyber crimes acts. Kenya has the Computer Misuse and Cybercrimes Act and Nigeria the Cybercrime Act 2015. Both laws stipulate hefty fines and lengthy prison terms that are viewed as veiled threats to professional and citizen journalists.

“Cyber crimes acts generally give governments powers to arbitrary ban and sanction dissemination of newspaper articles or social media posts that are not pleasing to the leadership of the day,” Chiza tells IPS.

“Africa has a predominant youthful generation. Young people have proved capable of mobilising through social media. Social media is the new battlefield in the fight for freedom across Africa,” he expounds.

In 2018, the bloggers Association of Kenya sued the Attorney General and Director of Public Prosecution because of punitive provisions in the Computer Misuse and Cybercrimes Act.
This resulted in the suspension of certain provisions that seemed to infringe and threaten freedom of expression, media and person’s rights.

In northwest Africa, Mauritania now ranks 94th out of 180 countries after falling down 22 places in just one year. Since 2018, the death sentence for apostasy-related crimes such as blasphemous speech and sacrilegious acts has become compulsory in Mauritania even after the offender has repented.
This has all but guaranteed that journalists and bloggers stay clear of certain hot topics such as corruption, the military, Islam or slavery, which is still practiced there.

Overall, press freedom in 22 of Sub-Saharan Africa’s 48 countries is classified as ‘bad’ or ‘very bad’. But it is not darkness and despair everywhere.

Ethiopia used to be near the bottom of press freedom index but reforms by Prime Minister Abiy Ahmed has pushed the country up 40 places since 2017, to rank 110th in the world.

Similarly, a change in leadership is steadily pulling Gambia and more modestly Angola from an information black hole. An admirable press revolution has Gambia jumping 30 places to rank 92nd.

Even more impressive, Namibia at position 23, Ghana at 27 and South Africa at 31 currently rank better in press freedom than Britain at 33 and the United States at 48th position out of 180 countries.

Though Taban hopes that the recent power-sharing agreement between Sudan’s military and civilian leaders until the country’s elections in three years bodes well for the media environment.

“It is still too early to say what the media environment will look like but there are two things that are very promising. That court orders can be respected because it was a court judgment that restored the internet, and that we have key parties together willing to share power,” Taban says.

“Once the three-year power sharing agreement is signed and the country becomes more stable and predictable, information will flow more easily.”