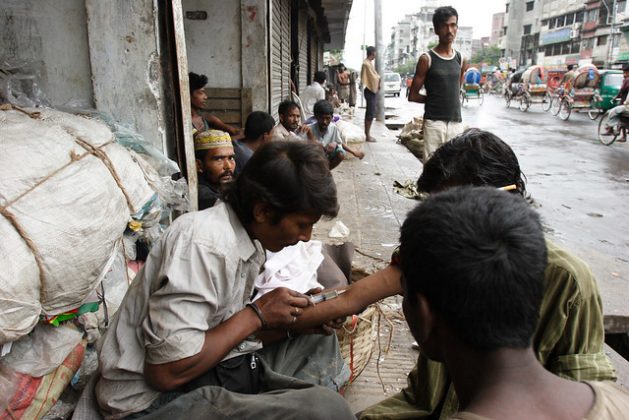 BANGLADESH: Dose of Vigilance Helps Manage HIV, AIDS DHAKA, Nov 3, 2010 (IPS) - It is one of the poorest countries in the world, has a low literacy rate, and is next door to at least two countries that have a considerable portion of their respective populations with HIV and AIDS. Yet even having a large migrant population has not made Bangladesh a hot spot for HIV and AIDS. http://ipsnews.net/news.asp?idnews=53443

Speaking with reporters in New York, Carlsson, head of U.N.-led efforts against the pandemic, warned that gains over recent years were under threat, particularly in parts of eastern Europe, central Asia, the Middle East and Africa.

“We are at a precarious point in the response to HIV. Some countries are making impressive gains, while others are experiencing rises in new HIV infections and even Aids-related deaths,” Carlsson said at U.N. headquarters.

“Annual gains are getting smaller and the pace of progress is slowing down.”

More than half of all new HIV infections in 2018 were among drug users, sex workers, men who have sex with men, transgender people, prisoners and the sexual partners of these groups, said Carlsson.

Many of those at-risk groups do not get the treatment they need, she added.

A UNAIDS report released Jul. 16 noted “worrying increases” in these new infections in eastern Europe and central Asia, where HIV cases rose by 29 percent, as well as in the Middle East, North Africa and Latin America.

Global funding for the fight against Aids dropped off markedly in 2018 — by nearly one billion dollars— as international pledges dried up and domestic investments did not grow fast enough to fill the gap.

Only around 19 billion dollars was available for the Aids response in 2018 — some 7.2 billion dollars short of the total 26.2 billion needed by 2020, said Carlsson, describing a “deeply concerning” development.

“Ending Aids will not be possible unless we are investing adequately and smartly, focussing on people first, not diseases, and creating roadmaps for people who are left behind,” said Carlsson.

Some 770,000 people died of Aids globally in 2018 and almost 38 million people were living with the human immunodeficiency virus (HIV) that causes it. The disease is transmitted via infected blood and other bodily fluids.

HIV cannot be cured but the infection can be kept in check by Aids drugs known as antiretrovirals. Around 23.3 million of the 37.9 million people with HIV globally currently get the Aids drugs they need.

Around 1.7 million people were newly infected in 2018, a 16 percent decline since 2010, driven mostly by steady gains in parts of eastern and southern Africa, according to the latest UNAIDS report.

South Africa, for example, has cut new HIV infections by more than 40 percent and Aids-related deaths by around the same proportion since 2010. But the report warns that the disease is still rife in other parts of eastern and southern Africa.

Earlier this month, the aid group Médecins Sans Frontières (MSF) warned that efforts to fight Aids were “stagnating” and that many of the disease-related deaths could be prevented if better care was available.

Dr. Gilles Van Cutsem, head of MSF’s team on HIV and Aids, said that many HIV sufferers turned up at clinics in Congo, Guinea, Malawi and elsewhere with advanced symptoms of a condition that their immune system was unable to fight.

“When they arrive, sometimes it’s too late to save them. They might not have been diagnosed on time or they failed to get access to lifesaving treatment.”