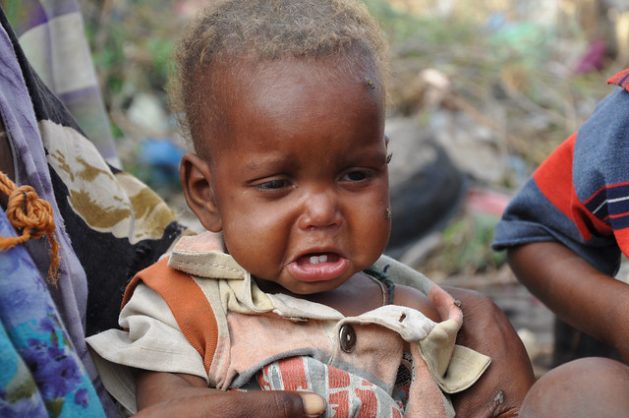 United Nations are warning of another drought in the Horn of Africa. Eight years ago famine left more than 260,000 dead. Pictured here is a child from drought-stricken southern Somalia who survived the long journey to an aid camp in the Somali capital Mogadishu during the 2011 famine. Credit: Abdurrahman Warsameh/IPS

UNITED NATIONS, Jul 25 2019 (IPS) - Humanitarian groups and the United Nations are warning of another drought in the Horn of Africa, threatening a repeat of the deadly dry spell and famine that claimed lives in Somalia and its neighbours eight years ago.

The British charity Oxfam said Thursday that more than 15 million people across drought-stricken parts of Ethiopia, Kenya and Somalia now needed handouts and warned of a hefty death toll unless donors stumped up cash fast.

“We cannot wait until images of malnourished people and dead animals fill our television screens. We need to act now to avert disaster,” said Lydia Zigomo, Oxfam’s regional director for the Horn of Africa.

According to an Oxfam report, donors were quick to dig into the pockets for a drought in 2017, helping to stave off a famine that could have been as deadly as the 2011 dry spell that left more than 260,000 dead, and many more hungry and sick.

But while the humanitarian response was well-funded back in 2017, donor governments have not raised enough cash yet this time around, added Zigomo, a human rights lawyer from Zimbabwe.

“We learned from the collective failures of the 2011 famine that we must respond swiftly and decisively to save lives. But the international commitment to ensure that it never happens again is turning to complacency,” said Zigomo.

“Once again, it is the poorest and most vulnerable who are bearing the brunt.”

Halima Adan, Deputy Director of Save Somali Women and Children, said in the Oxfam report that the slowness of the response to the drought “mean[s] women’s burdens and vulnerability are increasing. In often hostile environments, local actors are best placed to reach those most in need, where emphasis must be on reaching women and children”.

The U.N. refugee agency UNHCR has also sounded the alarm. Somalia’s recent April-June and October-December rainy seasons were drier than expected, worsening an arid spell that was already hitting farmers and herders across the turbulent country.

Some 5.4 million Somalis were expected to be facing food shortages by September, and 2.2 million of them would need “immediate emergency assistance” UNHCR spokesperson Babar Baloch warned last month.

Donors had only handed over one fifth of the 711 million dollars that was requested in an appeal in May, added Baloch.

“The latest drought comes just as the country was starting to recover from a drought in 2016 to 2017 that led to the displacement inside Somalia of over a million people,” Baloch told reporters in Geneva.

“Many remain in a protracted state of displacement.”

Last month, the European Union launched a 3.2 million euro scheme to manage water sources and agriculture and lessen the impact of drought, in cooperation with officials in Somalia’s capital, Mogadishu, and the northern breakaway region of Somaliland.

“Water and land are critical resources for the Somali economy and people’s livelihoods but are also extremely vulnerable to natural disasters and climate change,” said EU diplomat Hjordis D’Agostino Ogendo.

“While access to water needs to increase, needed infrastructures are to be designed and managed in a sustainable way.”

Somalia has seen little but drought, famine and conflict since dictator Siad Barre was toppled in 1991. The country’s weak, U.N.-backed government struggles to assert control over poor, rural areas under the Islamist militant group al Shabaab.

Droughts are getting worse globally, according to the U.N. Convention to Combat Desertification (UNCCD). By 2025, some 1.8 billion people will experience serious water shortages, and two thirds of the world will be “water-stressed”.

Though droughts are complex and develop slowly, they cause more deaths than cyclones, earthquakes and other types of natural disaster, the UNCCD warns. By 2045, droughts will have forced as many as 135 million people from their homes.

“With climate change amplifying the frequency and intensity of sudden disasters … and contributing to more gradual environmental phenomena, such as drought and rising sea levels, it is expected to drive even more displacement in the future,” added Baloch.

But U.N. experts say there is hope. By managing water sources, forests, livestock and farming, soil erosion can be reduced and degraded land can be revived, a process that could also help tackle climate change.