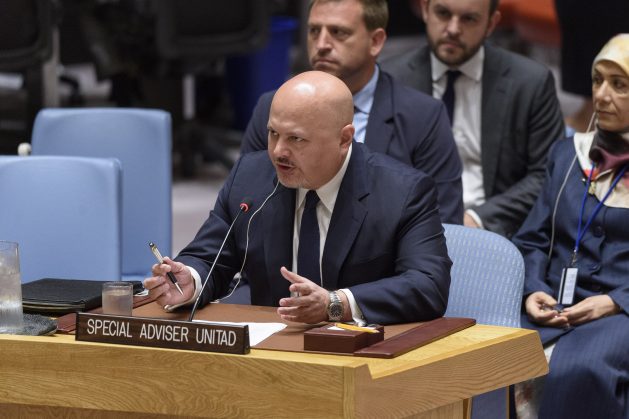 UNITED NATIONS, Jul 16 2019 (IPS) - A United Nations-backed probe into atrocities committed by the so-called Islamic State (IS) group in Iraq has frequently been criticised for making slow progress during its first two years of operations. Lately, that could be changing.

The head of the team, Karim Asad Ahmad Khan, told the U.N. Security Council this week that his investigators are digging up mass graves in Iraq, speaking with witnesses and could be assisting in their first prosecution of an IS suspect within weeks.

U.N. spokesman Farhan Haq said the U.N. Investigative Team to Promote Accountability for Crimes Committed by Da’esh/Islamic State in Iraq and the Levant (UNITAD), was putting the “voices of survivors, witnesses and communities at the heart” its work.

“There is an urgent and clear call for individual members of Da’esh to be held accountable, and for their crimes to be recognised and prosecuted as offences under international law,” Haq told reporters on Monday.

UNITAD was created by the U.N. Security Council in September 2017, but has struggled to make headway as world leaders grappled with the problem of detained IS jihadists, who come from Iraq and Syria and dozens of other countries.

Addressing the New York-based council on Monday, Khan said that his investigation team had expanded from 10 to 79 members this year and that they were making solid progress in securing justice for the victims of IS.

“Core staffing, facilities and evidence collection practices are now in place, and documentary, digital, testimonial and forensic material is now being collected in line with our investigative strategy,” Khan told the 15-nation council.

Researchers are digging up mass graves in Iraq and are focused on three probes — atrocities in Sinjar in August 2014, the massacre of Iraqi cadets in Tikrit in June 2014, and a pattern of atrocities in Mosul between 2014-2016, said Khan.

They are also gathering witness testimonies from Turkmen, Christians, Kaka’is, Shabaks, Sunnis, Yezidis, Shias and others who endured violence, rape and other horrors as IS launched a blitzkrieg assault through Iraq in 2014, he said.

The team has moved out of temporary lodgings and into offices in Iraq’s capital, Baghdad. It has acquired DNA, forensics gear and computer systems for storing Terabytes of data, videos and ISIS documents, said Khan.

In the past two weeks, investigators have collected some 600,000 videos of IS crimes and more than 15,000 pages of internal IS documents that can be used as evidence in trials in Iraq and elsewhere, said Khan.

Within two months, Khan expected to have reached an “important milestone” by providing “tangible support” in a case against a detained IS suspect. He did not identify the defendant or where the trial was taking place.

“While significant progress has been made in the last six months, I would wish to underline that the ability of the team to deliver on in its mandate remains dependent on the continued support of the council and the international community,” said Khan.

At its peak, IS controlled a swathe of Syria and Iraq that was almost the size of Britain. In March, U.S.-backed Syrian Democratic Forces (SDF) declared the group’s “total elimination” after its final desperate stand in the east Syrian hamlet of Baghuz.

Today, there are an estimated 55,000 captured IS fighters detained in Syria and Iraq, including many alleged foreign fighters from some 50 countries and 11,000 family members held at the al-Hol camp in northeastern Syria.

There is no international tribunal to prosecute the widespread atrocities committed under the self-declared IS caliphate. Several European countries have put citizens who joined militant groups in the Middle East on trial, but the approach has been piecemeal.

Prosecutions of IS suspects by the U.S.-backed SDF and by Iraqi authorities have come under criticism over fairness and other concerns. UNITAD was tasked with helping make trials in Iraq meet international standards.

The U.N. has called the massacre of the Yazidis by IS jihadists a possible genocide and investigators have detailed horrific tales of abuse against women and girls. Their cause has been championed by Nobel Peace Prize winner Nadia Murad and lawyer Amal Clooney.