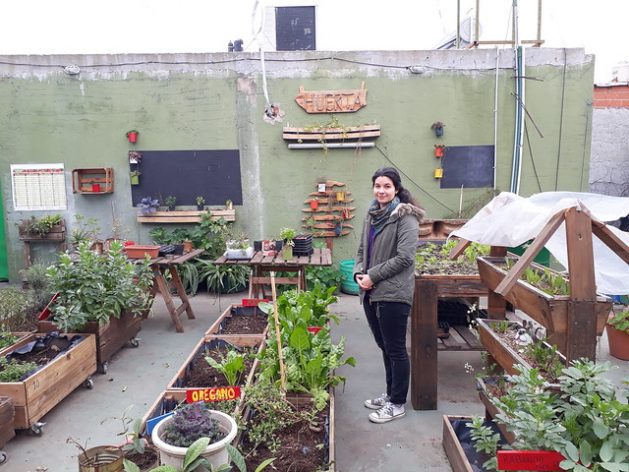 Milagros Sánchez, coordinator of the urban biosystem that operates in a community soup kitchen in Ciudad Oculta, a poor neighbourhood on the south side of the Argentine capital, shows the vegetables and mushrooms grown using waste products in crates and drawers on the roof. Credit: Daniel Gutman/IPS

BUENOS AIRES, Jul 29 2019 (IPS) - On the outer edges of Buenos Aires proper, where the paved streets end and the narrow alleyways of one of Argentina’s largest shantytowns begin, visitors can find the En Haccore soup kitchen.

The community endeavor is using renewable energy and the circular economy in an effort to improve quality of life for local residents.

“We were overrun by trash, because the garbage trucks don’t always come. Thanks to a biodigester we are now converting that waste into biogas, which enables us to spend less on energy for cooking. It’s a dream come true,” Bilma Acuña, the founder and head of the soup kitchen, told IPS.

"In our view, the main environmental problem is the exclusion of the poor, and we can help take care of the environment by improving people's quality of life and facilitating their access to energy and healthy food.” -- Gonzalo del Castillo

She explained that she started the soup kitchen in 1993, after losing her job at a meatpacking plant, at a time that many others in the neighbourhood also became unemployed during the government of neoliberal president Carlos Menem (1989-1999), when the unemployment rate climbed to almost 20 percent.

She named it En Haccore (En-hakkore), the Aramaic name of a spring in the biblical story of Samson and Delilah. The soup kitchen is on the southern edge of the Argentine capital, a 15-minute drive from downtown, at the entrance to the overcrowded shantytown of 25,000 people known as Ciudad Oculta (Hidden City).

Today, in a country of 44 million people where 2.65 million have fallen into poverty since last year, according to official data, Acuña says there are more unmet needs than ever in her neighbourhood.

That becomes clear after walking with her for just a few minutes: local residents come up to her and ask for milk, rice, noodles or any food that they can take home. The soup kitchen serves lunch and a tea-time snack to 300 people Monday to Friday, but every day new people show up, asking for a meal.

Since 2017, an “urban biosystem” has been operating in En Haccore, whose aim is to replicate in an urban setting the workings of nature, where everything that is consumed is generated within the system itself and all waste is reused, as part of a circular economy.

Thus, the biodigester, which is an airtight container where the lack of oxygen leads to the appearance of bacteria that decompose organic matter, is not only used to produce biogas from the peels of dozens of kilos of potatoes or carrots that are consumed every day in En Haccore. 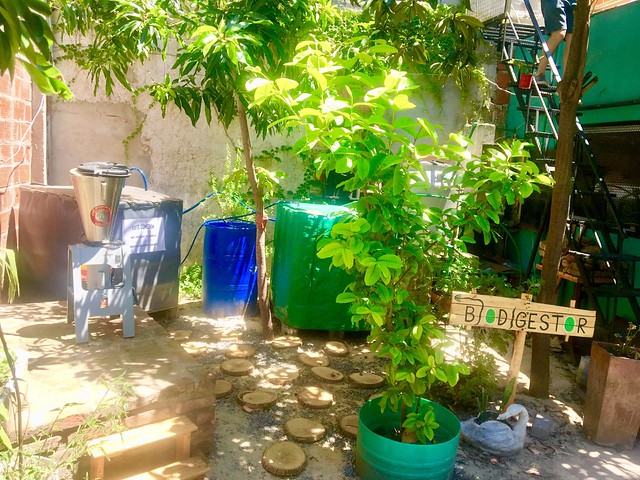 View of the biodigester that produces biogas, used for cooking in the En Haccore community soup kitchen in a Buenos Aires shantytown. The leftover waste is used as fertiliser and compost in the urban garden on the facility’s rooftop. Credit: Courtesy of CeSus

The waste is also used to produce compost and fertiliser for the urban garden growing on the rooftop of the soup kitchen.

In addition, there is a solar collector that heats water using thermal energy, making it possible to purchase less bottled gas, since in this poor part of the city there is no connection to natural gas pipes.

“In our view, the main environmental problem is the exclusion of the poor, and we can help take care of the environment by improving people’s quality of life and facilitating their access to energy and healthy food,” Gonzalo del Castillo, who is ultimately responsible for the initiative, told IPS.

“We want to debunk the idea that only those who already have their basic needs met can take care of the environment. On the contrary, we believe that increasing environmental quality helps people who face greater obstacles to develop their resilience, which is the ability to adapt to the problems of the environment,” he adds.

Del Castillo is the director of the Argentine Chapter of the Club of Rome, an international organisation founded in Italy in 1968 that brings together people from different backgrounds and areas and was one of the first voices to raise the challenges to human welfare caused by the destruction of the environment.

In Argentina, the local branch of the Club of Rome created the Centre for Sustainability for Local Governments (CeSus), which provides technical assistance to municipalities on environmental and social issues and was invited by the Buenos Aires city government to work in Ciudad Oculta. 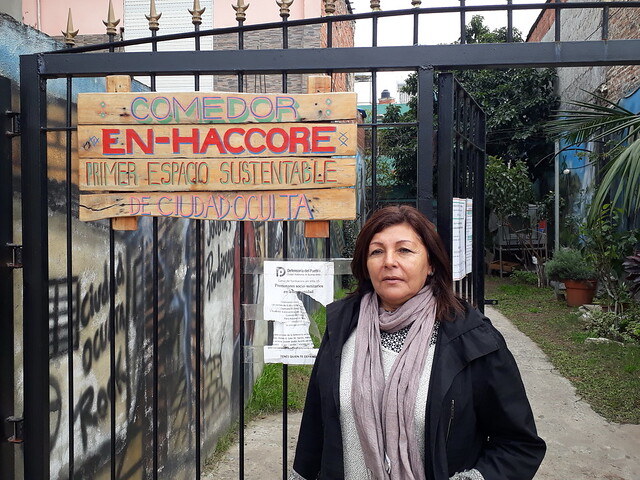 Bilma Acuña is the founder and director of the En Haccore soup kitchen, located on the border between the city of Buenos Aires and the shantytown of Ciudad Oculta. The facility also has a network of mothers who fight drug use among young people. Credit: Daniel Gutman/IPS

The project seeks to counter the system by which food and fuel produced in rural areas are consumed in urban areas, while the resulting waste is often dumped back in the countryside.

Del Castillo explains that the idea in En Haccore was to build “an integrated system, where solar energy reduces the consumption of gas for cooking, while the waste produced in the soup kitchen feeds the bidiogester and this generates new energy in the form of biogas, while leaving other waste that is used to fertilise the organic garden and the machine that makes compost.”

The garden is simply crates and drawers filled with soil on the cement roof, where vegetables and mushrooms are grown using waste like coffee grounds, as well as hydroponic crops, which do not use soil but depend on the efficient use of water.

There is also a collection point for used vegetable oil, which is periodically picked up by a foundation that uses it to make biodiesel.

“Cooking oil was a very serious problem here, because it was often dumped into pipes or wells and altered the entire system, due to the precariousness of the sanitation infrastructure, which is informal,” the coordinator of the project in Ciudad Oculta, Milagros Sánchez, told IPS. 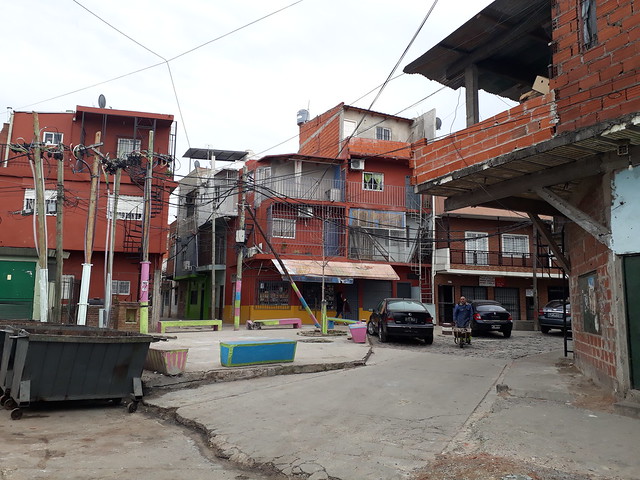 View of the entrance to the Ciudad Oculta shantytown, within the larger informal neighbourhood of Villa Lugano on the south side of the Argentine capital, a 15-minute drive from downtown Buenos Aires. Credit: Daniel Gutman/IPS

The experimental project includes key participation by the community through training workshops, because the aim is for it to continue when CeSus pulls out.

“Now I dream of having a biodigester and a solar collector to produce my own energy in my house,” said Alejandra Pugliese, a local resident who told IPS that her participation in workshops where she learned about urban gardening changed the way she sees life.

“I became aware that if you connect with the cycles of nature it is possible to improve quality of life even with few resources,” added Pugliese, who works caring for children and the elderly and has recently seen a drop in her income due to the recession that began in Argentina in 2018.

The urban biosystem is also being developed in another soup kitchen in Ciudad Oculta and in another shantytown in the south of Buenos Aires, Villa 21.

Some three million people live in more than 4,000 shantytowns or slums, known as “villas”, in this Southern Cone country, according to a survey carried out last year by the government in conjunction with social organisations.

CeSus is seeking support from the public sector to demonstrate that it is possible for urban communities, not only in “villas”, to apply the circular logic of natural ecosystems in order to become self-sustainable.