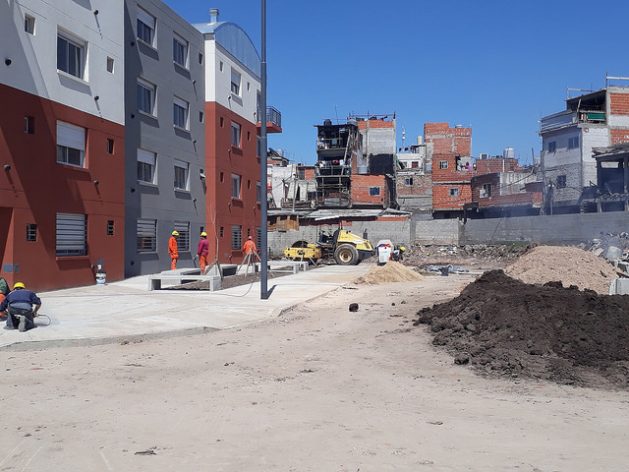 Unfinished buildings in the Pope Francis neighbourhood, a modern social housing complex, and in the background the Villa 20 shantytown, where some 28,000 people live without basic services, in the south of Buenos Aires. Credit: Daniel Gutman/IPS

BUENOS AIRES, Oct 24 2018 (IPS) - “We are the people who are excluded from the system,” says Rafael Rivero, sitting in his apartment in a new social housing complex next to one of the largest slums in Buenos Aires. The contrast sums up the complexity of the social reality in the Argentine capital.

Rivero, 66, and his wife, Felina Quita, 10 years older, lived for 38 years in Villa 20, an area of about 30 hectares in the south of the city, a crowded shantytown home to thousands of families who cannot afford regular housing. The neighbourhood has 27,990 inhabitants, according to the 2016 official census.

The plot next door belonged to the Federal Police, who for decades used it as a depot for crashed and abandoned vehicles, which turned it into a source of pollution.

"It is a big step forward that the authorities have taken the decision to urbanise and are allocating funds to do so. Although the work is progressing slowly, no one is talking about eradicating the villas anymore." -- Pablo Vitale

In 2009, more than a third of Villa 20’s children were found to have high concentrations of lead in their blood, and the courts ordered that the families be evicted.

That task had not yet been completed in 2014, when some 700 destitute families occupied the site. Several months later, in the midst of a social emergency, the occupants agreed to leave and the authorities promised to urbanise the area.

Today the land is the construction site for 90 four-story buildings being built by the city’s Housing Institute (IVC), the agency tasked with the monumental mission of solving the housing deficit of Buenos Aires.

In the Argentine capital proper, 233,000 people or 7.6 percent of the population, live in slums, known locally as villas. This does not count the population of the greater Buenos Aires or the vast low-income suburbs.

The construction project, named the Pope Francis Barrio, for the pope who comes from Argentina, consists of 1,671 apartments and was designed for families to move there from Villa 20. Families began to move in February, and 368 units have already been delivered. The IVC promises to complete the process next year.

“The house we had in the Villa was always getting flooded. Every time it rained, there was more water inside than outside,” said Rivero, who less than two months ago moved to his new home, which has an open plan kitchen, living room and dining room, and one bedroom, since the couple lives alone. There are units with up to four bedrooms, depending on the size of the families.

He’s happy, although he still doesn’t know how he’s going to pay for electricity, water, and municipal taxes. For now, he hasn’t received any of the bills for services, which in the last two years have caused enormous unrest in Argentine society, due to rate increases of up to 800 percent. 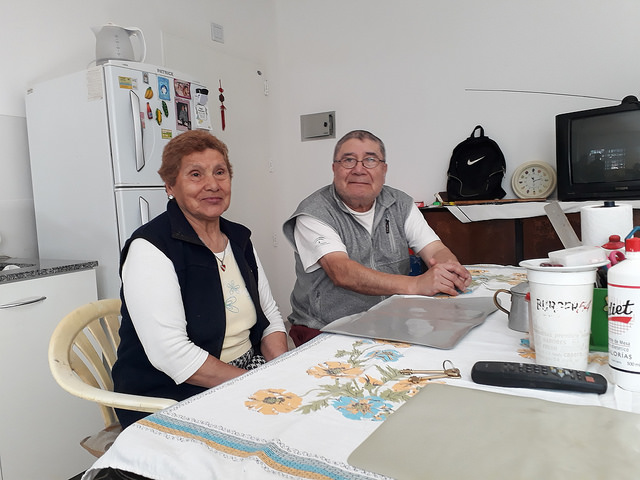 Felina Quita (L) and Rafael Rivero, in the kitchen-dining room of the apartment to which they moved in August, after living in a nearby shantytown for decades. They were chosen by the Buenos Aires authorities as beneficiaries of the social housing plan because their house was in an emergency situation due to frequent flooding. Credit: Daniel Gutman/IPS

Rivero told IPS in his home, where everything still smells new, that he came to Villa 20 more than 50 years ago, from the province of Jujuy, in northern Argentina.

“I was a boy and my aunt brought me. When the countryside was mechanised, there wasn’t so much work in sugar cane, many people were left without work and came to Buenos Aires. I’ve worked as a baker, a carpenter, a bricklayer, a waiter,” Rivero said. His wife is a retired domestic worker.

Juan Ignacio Maquieyra, president of the IVC, explained to IPS that “we are working towards the integration of shantytowns” into the city.

“Along with the construction of the Pope Francis neighborhood, we are urbanising Villa 20, which involves opening up streets, building infrastructure and leaving open spaces and courtyards, since one of the most serious problems is overcrowding and lack of ventilation,” he said.

The families chosen to move into the new apartments are those whose homes were in the worst condition or must be demolished to open up streets and urbanise.

“The city government did not comply with what it had promised. We are still waiting for the sanitation works. The storm drains mix with the sewers, and when it rains and overflows, we keep stepping on excrement,” Rubén Martínez, a 46-year-old man who grew up and still lives in the Villa, told IPS.

He is one of the members of the Mesa de Urbanización, a group taking part in the urbanisation process.

Martínez echoes what many others suspect: that the Pope Francis neighborhood was built to “hide” Villa 20 from view of another construction in the area – the Olympic Village, housing the athletes of the Youth Games that are being held this month in Buenos Aires. 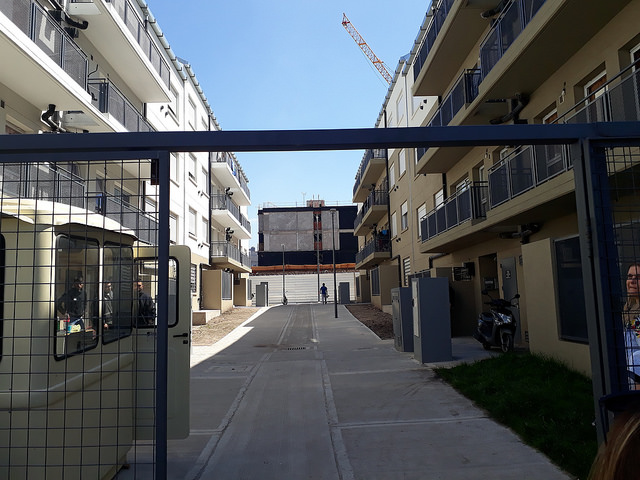 The entrance to a block of completed buildings in the new Pope Francis neighbourhood, which will have 90 buildings and 1,671 apartments. The residents of the neighboring Villa 20 shantytown in the south of Buenos Aires, Argentina, have begun to be resettled in the new social housing units. Credit: Daniel Gutman/IPS

According to a survey presented by the government this year, there are 4,228 slums and shantytowns in Argentina, 45 percent of which emerged after the severe economic and social crisis of 2001-2002 which cut short the government of Fernando de la Rúa (1999-2001).

Three and a half million people live in the slums, out of a total population of 44 million.

Social conditions are once again growing worse today, as acknolwedged by President Mauricio Macri himself, who is implementing an austerity plan agreed in September with the International Monetary Fund (IMF).

The most complicated situation is found in the suburbs of Buenos Aires, where there are hundreds of villas and child poverty exceeds 50 percent.

This year, the government introduced in Congress a bill agreed with social organisations, to recognise the ownership of their land by the residents of the shantytowns. It was presented as a first step towards the recognition of more rights.

But it is only in Buenos Aires proper that the authorities have begun to take steps towards the integration of the villas.

“Slum-dwellers in Buenos Aires have been demanding urbanisation for decades, but only in recent years has the state recognised that right. The initial impulse came from court rulings,” Horacio Corti, ombudsman for the City of Buenos Aires, told IPS.

The Ombudsman’s Office defends the vulnerable in the local justice system, which in 2011, for example, ordered the urbanisation of the Rodrigo Bueno Villa, which is close to Puerto Madero, a posh waterfront neighborhood.

For Pablo Vitale, of the Civil Association for Equality and Justice (ACIJ), which for 15 years has been working on legal support for community organisations that fight for regularisation of the villas, “it is a big step forward that the authorities have taken the decision to urbanise and are allocating funds to do so. Although the work is progressing slowly, no one is talking about eradicating the villas anymore.”

Vitale, however, told IPS that the urbanisation plans have begun in villas that due to their location could be the most coveted by real estate interests.

“That could indicate that the objective is for the market to end up evicting people, driving out the people who can’t afford the higher costs involved in paying taxes and rates for public services that formality brings,” he warned.