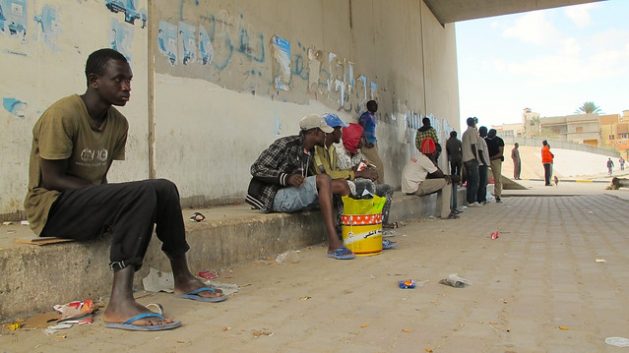 One month after the attack on Tajoura, Libya which killed 53 detainees and injured more than 87 others, little has been done to help the incarcerated migrants in the turbulent country. Many sub-Saharan Africans migrants go to Libya hoping to make it to Europe and a better life. Credit: Karlos Zurutuza/IPS

UNITED NATIONS, Aug 1 2019 (IPS) - It is almost one month since an airstrike on a detention centre in Libya killed and injured scores of migrants and refugees locked up inside, many of whom were detained for doing nothing worse than fleeing instability or seeking better lives in Europe.

This week, it looked like world powers were finally making an effort to persuade Libya’s United Nations-backed Government of National Accord (GNA) to come good on its promise to free the thousands of refugees in lockups under its control.

At a U.N. Security Council meeting on Monday, diplomats were “concerned by the situation of refugees and migrants” in Libya, and were poised to take action, last month’s council president and Peruvian envoy Gustavo Meza-Cuadra told reporters afterwards.

Earlier, diplomats heard from the U.N.’s envoy to Libya, Ghassan Salame, who said the Jul. 2 bloodbath at the facility in Tajoura, a suburb of Libya’s capital, Tripoli, should prompt officials to close such centres once and for all.

“What is required is that they be shuttered,” Salame said via a video link from Tripoli.

“I urge the council now to call upon the authorities in Tripoli to take the long-delayed but much-needed strategic decision to free those who are detained in these centres.”

One month after the attack on Tajoura, which killed 53 detainees and injured more than 87 others — mostly sub-Saharan Africans who were seeking better lives in Europe — little has been done to help the incarcerated migrants in the turbulent country.

Despite GNA pledges to close Tajoura, officials instead filled the bombed-out hangar on a military base with some 200 new migrants and refugees since the late-night air strike that caused chaos and carnage in eastern Tripoli.

To make matters worse, new detainees include migrants who were picked up by Libya’s coast guard after their vessel capsized in the Mediterranean on Jul. 26 — a catastrophe that saw as many as 150 passengers drown.

Some 5,000 refugees and migrants are detained in facilities under the control of or linked to the GNA, Salame said. Some 3,800 of these were on the front lines of fighting in the North African country’s civil war.

The Lebanese diplomat also criticised the European Union (EU) for funding a scheme that sees Libya’s coast guard intercept migrant boats at sea before returning them to Libya and detaining them in places like Tajoura.

Likewise, Amnesty International, Human Rights Watch (HRW) and other campaign groups have criticised the 28-nation bloc for bemoaning Libya’s ill-treatment of migrants while at the same time backing schemes that lead to abuse.

Amnesty has decried the “utterly inhumane” conditions inside Libya’s migrant lockups, where detainees have “little access to food, water or medical care” and endure “brutal treatment, torture, rape – and even being sold”.

John Dalhuisen, a regional expert with the European Stability Initiative, a think-tank, said the EU was complicit in abuses by making it harder for refugees and migrants to exit Libya and cross the Mediterranean.

“The EU has backed a policy that essentially amounts to containment. It has invested and trained the Libyan coast guard and reduced its own rescue services in a very successful effort to stop migrants reaching Europe,” Dalhuisen told IPS.

“It made some effort to improve conditions in Libyan detention facilities and secure access to them for international agencies, but with very modest results.”

An EU spokesperson told IPS that it backs Libya’s coast guard in an effort to stop refugees and migrants from perishing at sea, but that the 28-nation bloc was strongly against locking them up back on Libyan soil.

U.N. bodies, including the refugee agency UNHCR and the International Organisation for Migration, have assisted detained migrants and even arranged for some to be released and sent back to their countries of origin.

Some have been assessed and gained refuge in Europe; others have been settled elsewhere, such as Niger. But these schemes have only affected a tiny proportion of the estimated half-million refugees and migrants in Libya.

Judith Sunderland, an associate director for HRW, said “space is limited” in UNHCR resettlement schemes and there are logjams, with few “longer-term solutions” for settling refugees after temporary stops in Niger.

“The UNHCR’s programme to evacuate asylum seekers and refugees from Libya is severely handicapped by the low number of resettlement pledges by European countries and the slow pace of actual resettlement of the few that are processed,” Sunderland told IPS.

The situation is complicated by turbulence across Libya, which has seen little but violence since the 2011 uprising that killed president Muammar Gaddafi and saw the nation collapse into a civil war that continues today.

The airstrike that devastated Tajoura occurred after renegade military commander Khalifa Haftar and his self-styled Libyan National Army (LNA) launched an offensive in early April to seize control of Tripoli. The GNA blames the LNA for the deaths, which the LNA denies.

Elinor Raikes, a regional director for the International Rescue Committee, an aid group that operates in Libya, said that locking up migrants was not a problem only in North Africa, but part of a global anti-immigrant phenomenon.

“Arbitrary detention is not a just response to seeking safety, but countries across the world, including in Europe and the United States, are taking part in what is a deeply concerning trend,” Raikes told IPS.

“Detention has become a form of border management, and this has meant that thousands of people are intercepted at sea and on land and then detained in inadequate living conditions, often in overcrowded cells at risk of disease and infection.”