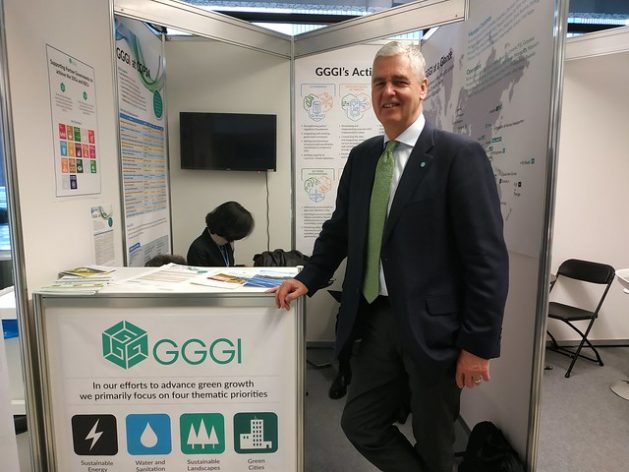 UNITED NATIONS, Sep 27 2019 (IPS) - A week ago, downtown New York witnessed one of the most historic moments in the climate action moment — hundreds of thousands of people attended the Climate Strike, where teen activists delivered powerful speeches and blows to world leaders for not taking climate change seriously.

Dr. Frank Rijsberman Director-General of the treaty-based Global Green Growth Institute (GGGI), attended the strike — but for him, it wasn’t just about that one moment. As someone who’s worked in sustainable development for more than three decades, this was a long time coming. And upon his return to Seoul, South Korea, where GGGI is headquartered, his 10-year-old son will skip school on Friday to attend the Climate Strike there.

During an intense week in New York as the United Nations General Assembly convenes, where climate action is at the centre of the debate this year, Rijsberman sat down with IPS for a brief chat on what the next decade will bring in the climate action momentum, and what role GGGI will play. Excerpts of the interview follow:

Inter Press Service (IPS): Given the current climate at this year’s UNGA, there’s a lot more momentum on climate action, so where does GGGI’s work stand?

Dr. Frank Rijsberman (FR): I read quite a few negative stories about the summit yesterday [Monday] but I don’t quite see it that way, particularly now I think we have some 70 countries committed to Net Zero by 2050 up from like 20 last year. I think more and more countries signing on to that.

Some journalists are taking on the fact that the leaders who are signing on to those targets don’t know exactly how to achieve those but, I was in a few meetings with the Danish Prime Minister who made the Net Zero commitment and a 70 percent reduction by 2030 commitment, which is one of the strongest targets. And she admitted, that we don’t know how to get there. She actually turned around and said, “If we knew exactly how to get there then our target wouldn’t be ambitious enough because we ought to develop new technology.”

You create the target and then you go to work on how to achieve it. I think that’s the positive side of that story and then we see a lot of initiatives that are all pointed on that from clean energy investment accelerators, initiatives around accelerating energy efficiency up to 3 percent per year, doubling the current rates so there are a lot of initiatives that are contributing and all of it are leaning to supporting and enabling countries to come up with more ambitious targets by the COP next year in Glasgow.

It would’ve been nice if there were a lot of binding commitments shared yesterday in the climate summit but I would see this more as a stepping stone to urge countries to be ready with those commitments next year and frankly the speed with which countries sign up to the Net Zero target is pretty impressive.

IPS: Do you think there’s as better response from countries this year than previous years?

FR: Last year was 20, now it’s 70 countries that have committed to Net Zero.

There are more countries now that are recognising there’s a climate crisis – they no longer [talk about] climate change, this neutral language. They’re talking about the climate crisis and emergency and responding to it like that with the laws, climate laws, and then we’re going to have to go figure out how to do that which is not so easy but not so impossible either.

IPS: These are developed countries, so where do developing countries fit in?

FR: Our members are all the way from Denmark to Qatar and [the United Arab Emeritus] UAE down to countries in Africa, Asia and the Pacific. So, leaders are on one hand clearly the Denmarks and the UKs of the world and on the other hand we worked with Fiji to come up with their lower development strategy 2050.

In between, there are countries like Indonesia and Vietnam who are really struggling because they are the ones that have a lot of coal and have developed their industry very successfully based on coal and fossil fuel. They’re the ones that are going to have to make the most difficult choices. They don’t have a lot of money, they feel they can’t afford it but yes they’re confronted with air pollution.

I think the best, most helpful example was China. In China, people were fed up with never seeing blue skies and having to wear air pollution masks. Air pollution and health concerns of the citizen are driving a lot of the investments in clean energy in Asia. And of course what you do for blue skies and for air pollution, you also do for the climate.

In a country like Vietnam, for instance, last year our story was that Vietnam was the country with the largest number of new coal fire power plants. They were going to build 25 new coal fire plants. And then the government came out with a new policy – [companies] get offered a [tariff] for large-scale solar.

The target was to be reached by 2025, and to everybody’s surprise they reached that on the 1st of July this year.

From nothing to 4.5GW — and not plans, not ideas but projects that are already built and connected to the grid.

Of course they still have a lot of coal fire power plants and they haven’t closed them. And that was the disappointment that Prime Minister [Narendra] Modi didn’t say anything about how he’s going to close them but they’re no longer going to build new ones because solar is cheaper.

So that has happened this year in Vietnam and that should happen next year (but hasn’t happened yet) in Indonesia.

IPS: Price of solar — there’s a myth that adopting these practices cost more but clearly they’re being demystified now. Is there a better awareness among countries now?

FR: Well, gradually. Vietnam believes it, but Indonesia not yet. When we go to Indonesia, we’re still working hard on awareness. Vietnam doesn’t really have as much awareness in pollution. In Seoul, people wear masks when the air is bad. You go to Vietnam, people aren’t wearing masks so you think the air must be better here. But no, the air is just as bad — people just don’t know about it yet.

So I think raising awareness of both the negative impacts of air pollution, climate change and that there are solutions that are commercially attractive is still a big part of the job.

That’s why there’s still work for organisations like ours, spreading these stories, showing the examples, helping the government develop the right policy framework and bringing in investors as well.

IPS: Are investors on board?

If you’re paying into your pension fund you want your savings to be invested in a solid place, so your retirement is still there. So they’re the lowest risk investors.

We may raise 10 billion dollars for the Green Climate Fund. Pension Denmark by itself will invest 50 billion dollars so the numbers indeed in the private sector are in trillions and they’re beginning to be mobilised.

So our work is showing that in the emerging markets that are also good investment opportunities for pension funds like Pension Denmark, and the role of the Danish government is to help Pension Denmark feel good enough about their investments in say, Africa, that they’ll risk their money so that the credit guarantee can come from Danish government as part of development aid and the money can come from the pension funds. That’s where the big money is.

So our job is to use the billions of development aid to mobilise the trillions from the private sector and institutional investors. And one of the most hopeful signs is that we can see that that is now starting to happen.

IPS: We’re now entering a new decade. What is GGGI’s plans for what’s ahead?

So our mission remains to use the experience and the money of some our contributing members to help accelerate the green transition in the other countries. We are pretty optimistic, pretty positive that there is great potential for that.

In the last two years we have mobilised about a billion dollars in green and climate finance for our members and now we have a target for 2030….to mobilise 16 billion dollars in climate finance and if we do that, then through our action that would save a gigaton in emissions, that would create two million new green jobs, that would provide sustainable services for 300 million people in green cities. So we have ambitious plans in line with the Paris agreement and SDGs to support our members to achieve those goals and targets.

IPS: What would you say are your challenges in negotiating with member countries?

FR: Among our high-income countries we have the real leaders like Denmark and Australia, then we have some African countries that are totally ready but they say we need financial help and then we all have Asian countries as we discussed who are all those Asian tigers, develop their economies based on not green but brown technologies.

So they are the ones that are the biggest challenge. But they do also have more money to invest like Vietnam, if they want to. So the challenges are a bit different in these different groups of our countries but bringing them together, and in a way organising a consensus, among our members that green transition is necessary and also feasible. That’s our job.