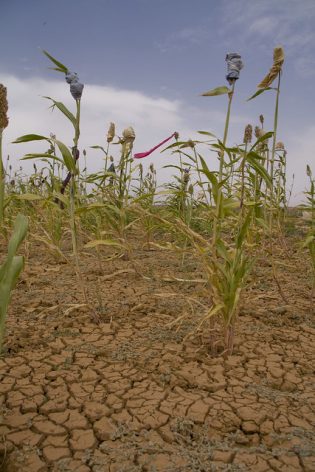 UNITED NATIONS, Oct 24 2019 (IPS) - A partnership between United Nations and African Union (AU) agencies will help African economies insure themselves against the droughts and other extreme weather events that plague the continent, organisers say.

The AU’s African Risk Capacity (ARC) and the U.N. Convention to Combat Desertification (UNCCD) stuck a deal in Bonn, Germany, this week to raise money for the safeguard scheme and advance policies that help countries adapt to weather threats.

Organisers say that 45 million people across Africa cannot put enough food on their tables, especially in the south and east of the continent, where punishing dry spells have cut harvest yields and pushed up prices of staples.

“Reducing the impacts of drought and other natural disasters by helping member states improve climate resilience through innovative mitigation and risk financing instruments are key to our mandate,” Mohamed Beavogui, ARC’s director general, said in a statement on Wednesday.

“The agreement signed today with UNCCD will create a functional synergy in our efforts to help countries better understand their risk profiles, improve knowledge and strengthen capacities for climate adaptation and food security.”

Ibrahim Thiaw, executive secretary of the UNCCD, described a new financial vehicle called the eXtreme Climate Facility (XCF) that would raise money for AU members to access to alleviate their parched agricultural sectors.

The XCF will be “an important tool to help African countries to cope effectively with the impacts of drought”, said Thiaw, formerly a Mauritanian official and deputy chief of the U.N. Environment Programme.

Drought-ravaged countries can apply to the fund for help adapting to drought and other weather calamities, organisers said. Payouts will be corruption-proof and provided as “climate change catastrophe bonds”.

“The message is clear. We will see an increasing number of droughts with unprecedented severity, which are exacerbated by climate change. No country or region, rich or poor, is immune to the vagaries of drought,” said Thiaw.

“The UNCCD is helping 35 of Africa’s 57 countries to create the mechanisms they need to take early action to avert drought disasters. Today, Africa is ramping up pre-emptive actions as a unified front against future drought and climate-induced disasters in the region.”

The inking of an agreement between the two agencies came amid a week of growing concerns over harsh dry spells across Africa that are reducing harvests, killing wildlife and worsening security for millions of people.

On Wednesday, the Stockholm International Peace Research Institute, a study group, released a report saying that three decades of conflict in Somalia — together with crippling droughts and flooding — were strengthening the hands of militants and weakening the government’s power.

In the Hwange National Park in western Zimbabwe, at least 55 elephants have died from starvation since September, officials said on Monday. The locations of their carcasses — near water holes — suggested they had traveled long distances to drink.

On October 15, aid agency Concern Worldwide, which co-compiles the Global Hunger Index, said hunger levels in the turbulent Central African Republic were “extremely alarming”, while levels in Chad, Madagascar, and Zambia were “alarming”.

“Today marks the beginning of a unified front against drought and climate-induced disasters in the African region,” Thiaw said in a statement on Wednesday.

“Our key aims are to support the establishment and implementation of national drought plans and mobilise innovative financial instruments to better mitigate the risks of extreme climate situations.”

According to the UNCCD, droughts already bad and they are getting worse. By 2025, some 1.8 billion people will experience serious water shortages, and two-thirds of the world will be “water-stressed”, the UNCCD says.