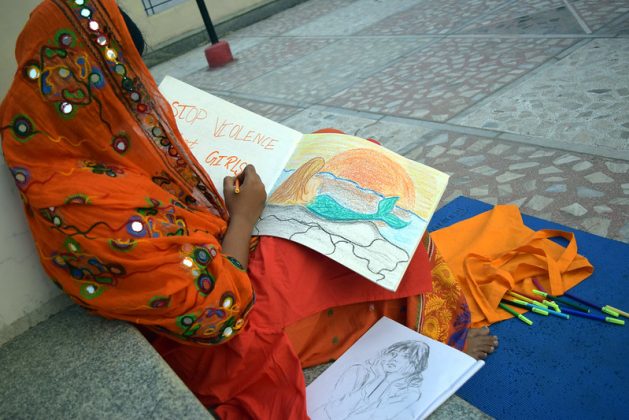 In Kashmir there are thousands of young women who were sold in their teens by their parents to older men, and now living lives governed by restrictions which many equate to imprisonment. Credit: Stella Paul/IPS

SRINAGAR, Oct 11 2019 (IPS) - Haseena Akhtar was only 13 when an agent told her parents that they could earn a good amount of money by letting her marry a Kashmiri man. The man was, however, three times older than Akhtar, the agent said.

Akhtar’s parents, who lived in the poverty-stricken region of West Bengal (an eastern Indian state), had two other daughters and according to tradition they would have had to bear cost of their marriages. So they let their 13-year-old daughter go with the agent.

Akhtar, who is now 20, ended up here in Kashmir — a landlocked northern region of India caught in the grip of violence and conflict over the past 30 years.

The agent took her to an old part of the city in Srinagar, the region’s capital, and she was married to a middle aged, disabled, Kashmiri man.

“That was not a marriage in any terms. That was a pure selloff. I was sold to a man who couldn’t find a bride for himself in Kashmir because his right leg was amputated after he was injured in a bomb blast some years before,” Akhtar told IPS.

Too many daughters and no boy

A year after the marriage, she gave birth to a girl.

Three more daughters later, and the strong desire by both her husband and her in-laws for a son and grandson was not fulfilled.

By the age of 18 Akhtar was mother to four daughters and relations with her husband and her in-laws had deteriorated.

“I was nothing less than a sex slave for my husband who wanted me to give birth to a boy. When that didn’t happen, I was first ridiculed, then beaten and then dragged out of the home along with my daughters,” Akhtar said.

One of the neighbours provided her with shelter and intervened to talk to her husband and his family. A volunteer organisation also came to her aid and helped her get work as a cleaner in a private firm, earning $100 a month.

When efforts to remedy things with her in-laws failed, Akhtar’s husband  paid her $550 and divorced her.

With a meagre income and four daughters to support, the road ahead for Akhtar looks filled with hurdles.

“I don’t know what I will do and where I will go. I sometimes wonder why being poor makes you vulnerable to all kinds of exploitation,” she said.

It’s so common, its socially acceptable

Akhtar’s story is not unique here.

In Kashmir there are thousands of young women like her, sold in their teens by their parents to older men, who are now living lives governed by restrictions which many equate to imprisonment.

Infested with violence and Islamist militancy, Kashmir is becoming a safe haven for human traffickers.

A three-decade insurgency that aims to free the region from Indian rule and the Indian efforts to quell it have claimed at least 100,000 lives, including those of civilians, militants and members of the security forces.

The border tensions and insurgency have killed an average of 1,500 people each year over the last 30 years, according to official records. Here, many former militants, torture victims and people who remain psychologically affected by the conflict didn’t marry at the traditionally marriageable ages of between 25 to 35 years.

Now much older, these rejected grooms are turning to agents who provide them with young, non-local women whom they can marry — all for the price of just a few thousand dollars.

Aabid Simnanni, a renowned scholar and a social worker who heads an organisations that focuses on human trafficking in Kashmir, told IPS that a majority of the marriages between Kashmiri men and teenage, non-local women end badly due to the generational and cultural gaps.

“You see the men to whom these young brides are married to are middle aged — 40 to 45 years old. How could you expect such a huge generation gap to disappear? Also, there are cultural, linguistic and many other barriers between the two sides. These things matter a lot in a successful marriage,” Simnanni said.

He said that for the past five years his organisation has been helping women get legal and financial help but that it would be a Herculean task to stop the practice.

Police won’t investigate because the women are legally married

A senior official in the anti-trafficking cell of the Kashmir police told IPS that it has become almost impossible to catch traffickers as there is no one willing to testify to the crime.

“The victim is usually married to the man by [law] and it is difficult to ascertain the victim’s age as the documents are already forged by the agents. We act only when we receive the complaint against anyone,” said the official who did not wish to be named as he is not authorised to speak to the media about the issue.

He says that there are no records available about the number of brides trafficked to Kashmir as the practice has societal acceptance in Kashmir.

“The marriage is happens in a broad day light. Though it is an open secret that these girls are sold by their parents for a pretty sum, the relationship they get into is absolutely legitimate and legal in accordance the law,” the official said.

My marriage, my prison

Four years ago, Ulfat Bano, a 14-year-old from India’s Northern state of Bihar was taken to Kashmir by her distant cousin who herself was married to a Kashmiri man.

Bano’s family was given around one thousand dollars and an assurance that she would marry into a good family.

Here she was given to a  50- year-old torture victim.

“I was shocked when I saw him first. He was older than my father and I was forcibly married to him. I had no choice,” Bano told IPS.

According to her, her husband was tortured in the early 1990s when militancy against the Indian rule erupted in Kashmir.

His left eye was damaged and for years he could not find a local woman to marry him. His family contacted Bano’s cousin, who was married to one of their relatives, and asked her to find a bride for their son.

Now the mother of a three-year-old daughter and a two-year-old son, Bano longs for home every day.

In the four years since her marriage, she has not been allowed to return to Bihar to see her family.

“Kashmir is nothing less than a prison for me. What good is this life for when you cannot meet your parents and share few moments of joy with them? My husband fears that if he allows me to meet my parents, I won’t return home.

“He is probably right.”