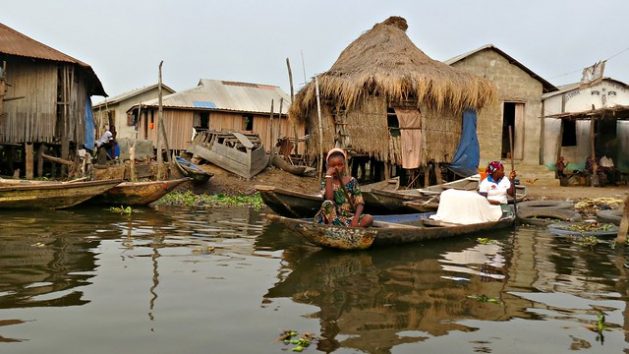 Poverty plays a huge role in the trafficking of women and girls in West Africa. Credit: CC by 2.0/Linda De Volder

COTONOU, Benin, May 3 2019 (IPS) - On a bus in Cotonou, Benin’s commercial capital, four Nigerian girls aged between 15 and 16 sit closely together as they are about to embark on the last part of their journey to Mali, where they are told that their new husbands, whom they never have met, await them.

They started off from their homes in Eastern Nigeria where their parents had reportedly agreed that they be “commissioned” to become the wives of Nigerian men living in Mali.

“Four compatriots asked me to bring them young wives because they want to get married. I’m sure they will be happy,” a human smuggler, who only identifies himself as Wiseman, tells IPS as the bus prepares to depart for Bamako, Mali’s capital. IPS is not allowed to speak to the young girls, who appear anxious.

When asked if the girls’ parents are aware they have to travel to Mali, Wiseman says: “I negotiated with them and gave them something as a down payment for their dowries, which will surely help them [the parents] start a small business or buy seeds for farming. These kids should count themselves lucky because they will work and perform wives’ duties, so their lives should improve big time.”

But nobody knows the real intentions of the men who ”commissioned” these girls. Or if they exist.

Pathfinders Justice Initiative, an international non-government organisation dedicated to the prevention of modern-day sex slavery, says Nigeria is a source, transit and destination country when it comes to human trafficking with Benin City, in Nigeria’s Edo State, being an internationally-recognised sex trafficking hub.

Nigeria ranks 32 out of 167 countries with the highest number of slaves (1,38 million), according to the 2018 Global Slavery Index report. While Nigeria has the institutional framework and laws against trafficking, at least one million people are trafficked there every year, according to the country’s National Agency for the Prohibition of Trafficking in Persons (NAPTIP).

Children the most vulnerable

In West Africa, children remain the most vulnerable to trafficking.

The latest Global Report On Trafficking In Persons by the United Nations Office on Drugs and Crime (UNODC) found that young boys and girls where among those most  trafficked in the region.

At the end of April, Interpol announced that it rescued 216 trafficked victim—including 157 children—from Benin, Burkina Faso, Niger, Nigeria, and Togo. Interpol is part of a global task force formed to address human trafficking.

Some of the trafficking victims were working as sex workers in Benin and Nigeria, while others worked all day in markets and at various eating places. Some were as young as 11 and had been beaten, subject to abuse, and told they would never see their families again.

“Many of the children are shipped actually into these markets to carry out forced labour. These are organised crime groups who are motivated by making money. They don’t care about the children forced into prostitution, working in terrible conditions, living on the streets, they are all after the money,” Interpol’s Director of Organised and Emerging Crime Paul Stanfield said in a video.

Benin, the transit stop for traffickers

Benin, a low-income country, has always been a transit route for west African migrants looking to irregularly make their way to Morocco, Algeria and Tunisia, and finally to Europe.

The city of Cotonou appears to be a huge transit route through which women and girls trafficked to North and West Africa pass as they are transported to various countries of their destination. While Togo, Burkina Faso, Benin and Mali have laws against child trafficking, nothing covers trafficking in persons above the age of 18, according to the UNODC report. Niger has no laws against trafficking.

The Economic Community of West African States’ policy of free movement of goods and people seems to make this easier as corrupt immigration officers at border posts look away in exchange for a few euros. When IPS asks Wiseman about border controls, he brushes aside the issue, saying he knows “how to handle them”.

When asked if he is responsible for the girls’ welfare, Wiseman replies: “I’m not a social worker, I’m a businessman and a helper. I help people to get good wives and lift the girls’ families out of poverty in exchange for money. The rest is history.”

When the incident about the Nigerian girls is described to Hassan Badarou, a community-based caregiver and religious leader from Benin, he says “they could be used as sex slaves by those men or sold to crime syndicates to serve as prostitutes in Mali or even as far as in North Africa.”

“It’s a pity parents allow their children to just leave the country in exchange for a few dollars. All of this wouldn’t have happened if they weren’t poor,” he says.

Poverty plays a huge role in the trafficking of women and girls in the region. But so too does culture.

In 2014, a female friend of Suzie’s family came to collect the then 12-year-old from her home in northern Benin.

“She promised to help me attend school after working at her home for one year, but she didn’t,” Suzie tells IPS in the local language, Fon, through a translator.

“Things started to go wrong when I started to remind her about that. She stopped paying me my salary and increased the workload and cut my meals down from two to one per day. And she started beating up me every time I protested,” the 16-year-old who lives in Cotonou tells IPS.

As time went by, the women’s male family members, who lived in the same house, started to make sexual advances towards Suzie. She refused the advances but eventually ran away because she could no longer bear the situation.

When asked why she doesn’t report the incidents to the police, she says: “I can’t do that. The woman is like my aunt so I couldn’t do it as this would have brought a conflict between the women’s family and ours back home.”

Badarou, the religious leader, explains that he has mediated in cases like Suzie’s.

“If you see the way these women ill-treat these girls, it should make you cry. I have documented many cases of abuse and have tried to mediate between some of these women and the girls.”

But he’s never reported any of these cases, however abusive, to the police.

“The only thing you cannot do is to report these cases to the police. We are all brothers and sisters of this country and we believe in solving our problems in harmony and peace through dialogue. Besides, it’s not our culture to report everything to the police. I blame West African governments for allowing this thing to go on and on to the extent of becoming a cultural norm institutionalised deep in the fabric of society. It’s now hard to break it,” he says.

Badarou explains that the actions are cultural.

“In the face of this deeply-entrenched culture of ”helping each other” by ”handing over” your girls to someone well established who is living in the cities, even the United Nations and children’s organisations sometimes have no choice but to turn a blind eye. I’m not saying they are not doing anything about it, but you can’t break up someone’s culture, especially in a region such as this where grinding poverty rules,” he says.

Richard Dossou seems to agree. He tells IPS that his uncle’s friend, a father of 18 children, is looking for “Good Samaritans” from Benin to take in some of his girls as he is unable to provide for them.

“I’m planning to travel to their village to negotiate with him with a view of taking even one, not as a wife, but as a maid. Then we will see how it will lead us. We help each other like this to fend off poverty and misery in this region,” Dossou says.

While Benin’s poverty hovers at about 40 percent, a report released in 2018  by the World Poverty Clock said in Nigeria a total of 86.9 million people are living in extreme poverty.

The fine line between cultural norms and child trafficking

Asked if this West African practice of “handing over” girls is a cultural norm of lifting families out of poverty, Jakub Sobik, communications manager for London-based Anti-Slavery International, tells IPS via email: “What you describe above are cases of child trafficking, when children are being recruited or harboured with a view of exploiting them.”

“Slavery doesn’t occur in a vacuum, it is underpinned by many factors, including poverty, discrimination, lack of access to education and decent job opportunities, the lack of rule of law, as well as practices that are culturally accepted in societies,” he explains.

He says that it is often the case that parents are “deceived about the conditions their children will be offered, and send them away in a genuine belief that they will get a better chance of education and life opportunities in surroundings of cities and perhaps better-off societal circles.”

He adds that in some societies children working is culturally accepted, because it has been the norm for generations. “We have a lot to do to change that and offer children childhoods, education and opportunities in lives they deserve.”

As the bus continues on the final journey that is meant to lift the Nigerian girls out of ”poverty” to ‘’freedom”; back in Cotonou Suzie wanders the city’s dark streets hand in hand with a Zemidjan—a motorcycle taxi driver—who appears to be aged between 40 and 50 and whom she describes as her boyfriend.