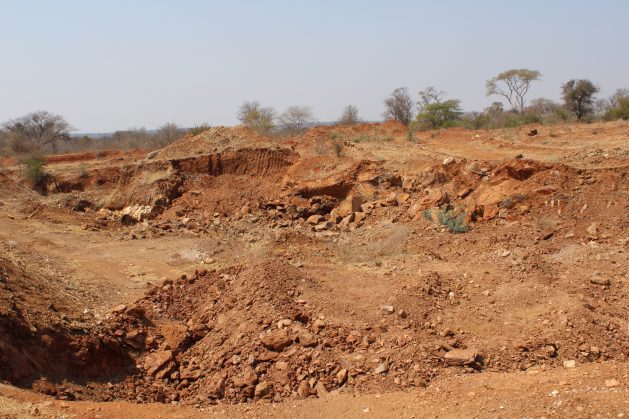 BULAWAYO, Oct 4 2019 (IPS) - Desertification is not cheap. It has social, cultural, environmental and of course economic costs to reverse what it destroys.

According to the United Nations Convention to Combat Desertification (UNCCD) the scourge of desertification is costing the global economy up to 15 trillion dollars annually, making it urgent to restore degraded land to mitigate climate change. In August 2019, the United Nation’s Intergovernmental Panel on Climate Change (IPCC)’s report  said better management of land can curb greenhouse gases that contribute to global warming. IPCC scientists said tackling land degradation can help keep temperatures below 2 degrees Celsius, a goal global governments are dithering to meet.

Holistic management, pioneered 50 years ago by acclaimed Zimbabwean ecologist, Allan Savory, is proving effective in the restoration of degraded land in many parts of the world where it is being applied.

The United States-based Savory is co-founder of the Savory Institute, a movement with a mission to regenerate the world’s grasslands through holistic management in order to address the global issues of desertification, climate change, and food and water insecurity. The Savory Institute is working along with its partner organisation, the Africa Centre for Holistic Management (ACHM), located 36km from the resort town of Victoria Falls, Zimbabwe, to regenerate deteriorating land in this southern African nation.

“It is all about the decisions we make,” says Sarah Savory, who works with the ACHM Education and training team. “Every decision we make always affect something else, because everything is connected – all people, plants, land, waters and animals. Trying to separate any of them like we do and manage successfully is no different to trying to successfully separate and manage the hydrogen in water.”

Savory talked to IPS about the management framework. Excerpts from the interview:

Inter Press Service (IPS): What is holistic management all about?

Sarah Savory (SS): Holistic management is not a practise at all. It is a management framework and anybody in the world can use it. From an individual making a decision and wanting to improve things in their daily lives or governments or organisations can use it to form a policy. All human actions are based on needs, desires and wants to address problems. What the framework does is it asks you to change the reason you make decisions.
Did you know that we could change our world by just changing the context, or reason, we make our decisions? And we can make the change as individuals wanting a better world, or as any organisation wanting to develop better policies.

IPS: What is the context and where do we start?

SS: First of all, we have to STOP blaming coal, oil and livestock for causing global desertification and climate change. Those are all natural resources so how can they possibly be to blame? Only our management of those things can be causing problems.

It is our management that places millions of animals in barbaric, inhumane, force-fed factories at great cost to our health, economy and environment and it is our management that calls fossil resources fossil fuels and burns them at a destructive rate. We could turn everything around today. Context is the foundation of holistic management. It is a statement about your most deeply held values, it is how you want your life to be, and the behaviours that will bring that about.

IPS: How does holistic management work?

SS: Within the holistic management framework, once you have formed your context and the reason you are going to make your decisions, you then get on with deciding what actions to take, what practices to use. Many practices are good but holistic management helps people know which and where any practice or action is appropriate.  For example, while a practice might be appropriate for one farmer in his unique holistic context, it might be completely wrong for his neighbour who will be dealing with his own completely different and unique complexity.
Anyone can use this framework but people who manage land are truly dealing with all social, cultural and environmental complexity, so in those situations, they get to learn about animal impact and the holistic grazing process, which is a new, biological tool that can be used, in the right situation, to regenerate land.

IPS: Your institute has devised the holistic planned grazing process, what is this about?

SS: All the world’s grasslands developed together with many millions of large herding animals that remained concentrated and moving in the presence of the pack-hunting predators that evolved with them. These grazing herds and their predators were vital to maintaining the health of the grasslands. The herds churn up and aerate the soil with their hooves while simultaneously grazing, trampling and fertilising the grass, forming protective mulch over the soil, preparing it for the next growing season. This mulched soil will hold our rain which will filter down into the soil, instead of running off, taking our precious top soil and silting up our rivers.

The holistic planned grazing of livestock is a new, biological tool available within the Holistic Management Framework, which is used to help regenerate land, in certain situations. This process ensures that the livestock are mimicking nature, as closely as possible, in order to consistently regenerate land, reverse desertification and restore biodiversity for wildlife and the people who live amongst them.

Holistic planned grazing is not a “grazing plan” because herds of wildlife would never follow a grazing plan – they would naturally and constantly shift and change their movements according to all the variables going on around them: we are always dealing with ever-changing social, cultural, economic and environmental complexity.

IPS: Why is this framework not being adopted widely by governments and organisations?

SS: History and research shows that people struggle to accept or adapt new thinking and counter intuitive insights and this the huge problem we face, as well as the fact that no organisation will ever lead a change – historically, it is only when enough of the public opinion shifts that an organisation will make a shift and start changing policies.

For the first time in history, we are successfully addressing the knock-on effects and damage of centuries of reductionist management, which now threatens humanity as a whole. Where holistic management has been properly practiced, there isn’t a single case of it not leading to improvement.