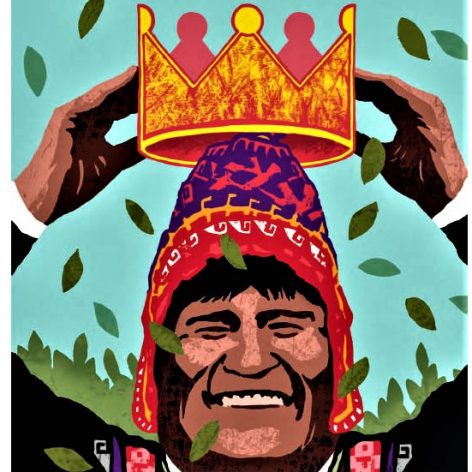 STOCKHOLM / ROME, Nov 20 2019 (IPS) - To be president in a country like Bolivia might be like a precarious act performed by a tightrope-dancer between “the Devil and the deep blue sea”. After 23 years as Bolivia’s President, Evo Morales finally lost his foothold and ended up as political refugee in Mexico, adding his name to a long list of previous revolutionary exiles, like Augusto Sandino, Fidel Castro, and most prominently – Leon Trotsky. The last one was murdered, though the others came back, something Evo Morales has promised to do:

Nevertheless, a galloping inflation was checked under Morales´s regime. Foreign currency reserves grew steadily, while millions were spent on subsidies and infrastructure. Contrary to many other Latin American populists, Morales is also a pragmatist who instead of outright nationalizing companies and institutions, while throwing out foreign investors, cut better deals for the State and embraced market-friendly policies.

If he had groomed a successor and accepted power transition Morales, who was born to a poor peasant family in the desolate and isolated Aymara village of Iasallawi, could have been remembered as one of the great political leaders of Latin America. Though as most leaders within a volatile, prejudiced and highly combative political environment he made self-interested moves and occasionally stabbed opponents in the back.

In spite of being known as a “modest person with little interest in material possessions”, who when he became president reduced both his own salary and those of his ministers by 57 percent to USD 1,800 a month, he soon became a brand of vitality and infallibility. One example was his regular, predawn workout in a gym, when he in front of an audience displayed stamina and strength. Later in the day he used to visit a couple of cities or villages, where his image was stamped on murals in subsidized housing complexes, on airport billboards and even on taxis and buses.

I first became acquainted with Evo Morales’s mounting presence when I on behalf of the Swedish International Development Cooperation Agency in 2000 began visiting Bolivian universities. When I first arrived in Cochabamba, Bolivia’s third largest city, it had recently suffered violent clashes between protesters and army troops. Riots erupted after President Hugo Banzer signed a contract with a private consortium to control the city’s water resources. This was part of a privatization policy initiated by his predecessor, Sánchez de Lozada, meaning that more than 50 percent of former state-owned businesses and enterprises were transferred to private investors. In Cochabamba, the price for water tripled, leading to wide-spread rioting among those who no longer could afford clean water.

My hosts at the San Simon University told me protests were organized by radicalized coca growers from Chapare, a district which population between 1992 and 2016 had doubled from 132,000 to 262,000,2 mainly due to an influx of former miners and smallholders, migrating from the highlands, which since the beginning of the 1980s suffered from an economic crisis shutting down mining enterprises and destroying markets for poor farmers. The majority of the migrants were Quechua and Aymara speaking indigenous people. Among the newcomers had been nineteen-years-old Evo Morales, whose family had left the highlands since violent storms had destroyed their small farm.

Several migrants were former union leaders hardened by decades of work in the mines and had no agricultural experience before their arrival, something that proved to be of great importance. The coca plant is autochthonous to the Chapare region, but had so far not been exploited, since its high concentration of alkaloids makes it unsuitable for akulliku (mastication), the common use of coca at higher altitudes. Nevertheless, Chapare coca was well suited for cocaine production and did not need much care from inexperienced farmers. It could be harvested four times a year and was highly profitable, satisfying an expanding, global market.

When I visited Chapare, roads entering the district were guarded by control stations making me remember the ones I passed while entering East Germany in the 1980s. They were guarded by armed personell from the Bolivian Army and the U.S. Drug Enforcement Administration (DEA), controlling in- and outcoming traffic. Inside the district, towns and villages made me think of towns in Western movies – haphazardly constructed buildings, bars and even brothels, but no communal squares. Stores were filled with the latest electronic equipment, refrigerators, air conditioners, computers, motorbikes, etc.

The San Simon University supported experimental plantations for various crops to stimulate farmers to quit coca production. Apart from such plantations I visited coca fields where growers told me that international support to drug eradication had actually made coca growing even more profitable – new roads improved buyers´ access, subsidies for alternative crops were gratefully received, while the coca purchasers offered improved plants with higher alkaloid content occupying less space and being suitable for interplantation with other crops. They considered DEA agents as enemies, as well as a Government, which according to them served a wealthy, urban elite bowing to U.S. pressure to persecute coca growers, of which several wore t-shirts with slogans like Coca no es cocaina, ”coca is not cocaine” and Causachun coca. Wañuchun yanquis, ”Long live coca. Death to the Yankees.”

Their hero was Evo Morales, who had organized the Cocalero Union and now headed the country’s second biggest political party. Adorned with a garland of coca leaves Morales gave arousing speeches presenting coca as an emblem of an Andean culture threatened by U.S. imperialist oppression. He was right about inept politicians and the open meddling of the U.S. in Bolivian politics, as well as coca being an integrated, even religiously important part of Andean culture, though he failed to mention that this was not at all the case of Chapare-produced coca. He was also right about the marginalized position of indigenous people, though he failed to mention progress made after the 1952/53 revolution when indigenous people had risen against a corrupt regime in an uprising that lead to extensive land reforms, universal suffrage, strengthened labour unions and efforts to integrate indigenous people in the ruling of a country where roughly 65 percent of the population identify themselves as ”indigenous people”. In short, to me Morales appeared to be a populist who slightly twisted reality to make it serve his political career.

However, Morales proved to be an able politician transforming his pro-coca and pro-indigenous stance to an effective political agenda that eventually changed Bolivia. Already a few months after Morales assumed the presidency in 2006 the State increased its control of the hydrocarbon industry. Corporations had up until then paid 18 percent of their profits to the State – now the new regime reversed the situation by decreeing that 82 percent of the profits would be passed on to the State. Oil companies threatened to cease all its Bolivian operations, but remained anyway. In 2002 the Bolivian State received USD 173 million from hydrocarbon extraction, but already in 2006 it obtained USD 1.3 billion.3

The increased revenue resulting from this and similar measures was invested in efforts to expand the welfare state. Prices of gas and many foodstuffs were controlled. Local food producers were motivated to sell their produce in the local market, rather than exporting it and the economy grew. Stronger public finances brought economic stability and inflation was curbed. Upon Morales’ election, Bolivia’s illiteracy rate was at 16 percent, the highest in South America. A literacy campaign was introduced and in 2009 UNESCO considered Bolivia to be free from illiteracy.4 By 2014, twenty hospitals had been established and basic medical coverage was guaranteed up to the age of 25, while low-income citizens over 60 received a monthly contribution of USD 344. Cash transfer programs were introduced to keep children of low-income parents in school. The legal minimum wage was in 2006 increased by 50 percent and pension age have successively been lowered from 65 to 58 years.

Nevertheless, Morales’s conservative critics have claimed that too much revenue was wasted on unnecessary projects like football fields and communal auditoriums, warning that projects implemented to ensure continued support for the Government would sooner or later end in a catastrophe, like the one in Venezuela.

Morales’s worst nemesis was his promise to support regional autonomy for Bolivia’s departments. When the country’s more affluent eastern departments tried to implement such policies, Morales backtracked, declaring it as an attempt of the bourgeoisie to preserve its wealth. He has also been accused of “hollow populism”, exemplified by the fact that he during his first presidential term gave ministerial posts to self-declared indigenous persons, though they were gradually replaced by middle-class politicians. Already by 2012 only 3 of the 20 cabinet minsters identified themselves as “indigenous”. Similarly, during his second term Morales’s cabinet contained more than 50 percent women, though the number soon dropped to a third. And the coca? He expulsed DEA and introduced fix quotas for coca production, trying to foment alternative crops. However, alkaloid rich coca is still grown in Chapare and there are conflicting information about whether cocaine production has decreased, or not.

The ultimate nail in Morales’s coffin was his decision to run for a fourth term and his various machinations to realize his intention. In spite of the fact that he lost a 2016 referendum that would allow him to pursue the presidency, he nevertheless participated in the 2019 election and declared himself victorious, though after several voting irregularities had been revealed and triggered off violent protests Evo Morales acknowledged defeat and fled Bolivia. The question is whether his legacy will be judged sympathetically, or if he will join the ranks of other former Latin American dictators and presidents whose vanity and clinging to power eventually obscured all their achievements.