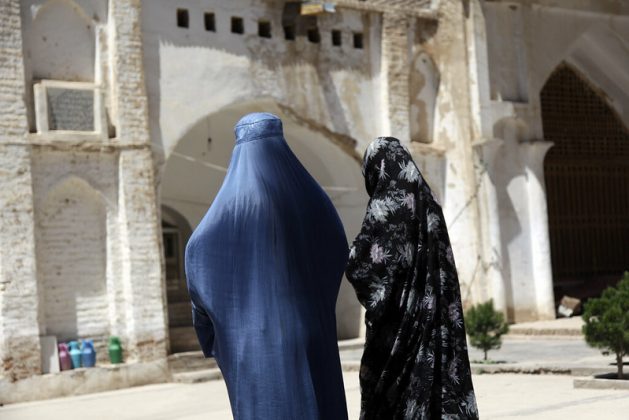 Two Afghan women walk near an ancient Mosque in western Herat province. On Tuesday Afghanistan’s first female ambassador to the United Nations launched a women’s group that aims to “protect and safeguard” the work that’s been done in the advancement of women’s rights in the last 18 years. Courtesy UNAMA / Fraidoon Poya.

UNITED NATIONS, Nov 21 2019 (IPS) - Afghanistan’s first female ambassador to the United Nations this week launched a U.N. group that aims to put women at the centre of peace initiatives in Afghanistan.

The purpose, Raz said, is to “protect and safeguard” the work that’s been done in the advancement of women’s rights in the last 18 years, and to ensure that Afghan women are no longer “recognised by victimhood, but rather than as a partners”.

Women’s rights and gender-based violence continues to remain a glaring issue in Afghanistan, with Ministry of Women’s Affairs of Afghanistan reporting an escalation in Amnesty International’s 2017-18 report.

“There is every reason to believe that were theTaliban to regain power through a deal they would make it a priority to restrict women’s rights dramatically,” Barr told IPS.

Concerns about the Taliban’s prisoner swap with the United States and Australia, which also took place on Tuesday, came up at the launch as well, when Raz candidly responded, “Look, peace is not easy. The process is painful. It needs patience.”

Last week, Afghanistan’s President Ashraf Ghani agreed to “conditionally” release the prisoners in an effort “to pave the way” for further peace talks.

“The Afghan government has often done the wrong thing on women’s rights, but things could still get much much worse,” said Barr, who has been doing research on Afghanistan since 2007 and lived in Kabul for six years. “All of these fears have been exacerbated by how peace discussions have played out so far.”

At the launch on Tuesday, Raz assured that the group is looking into the complex layers of addressing women’s rights caught in the conflict.

United Kingdom Permanent Representative Karen Pierce, who is co-chairing the group, pointed out that Afghan women were granted the right to vote before American women did, and said the purpose of the group was to put women at the centre of the peace process.

“It’s got this very central role of wanting to put women right at the heart of the peace process, not so that they have to be invited, but so that they are an integral part from the word ‘go,’” she said.

Afghan women, meanwhile, continue to remain on the ground to fight these injustices, says Omar Waraich, Deputy Director of South Asia at Amnesty International. An Asia Foundation 2018 report stated that women’s rights in Afghanistan are improving, albeit slowly.

The report further claimed women’s access to justice has significantly improved, with a survey showing more women were bringing domestic disputes to court than men. It attributed this change to the work by grassroots organising by civil society, the Ministry of Women’s Affairs, as well as the police which has established a special support unit for women reporting violence.

Beyond that, Afghan women in everyday lives are continuing to fight.

“Afghan women are among the bravest people the world has seen. Despite more than four decades of conflict, they have made remarkable strides,” Waraich told IPS. “They have defied the restrictions imposed on them by hardline religious groups. They have raised their voices against injustice in the face of grave threats.”

Barr echoed this thought, and said Afghan women have fought for years “to convince the Afghan government to include them in talks as part of the government’s delegation, with limited success.”

“Under U.N. Security Council resolution 1325 Afghan women have a right to be full participants on any talks about their country’s future,” she told IPS. “They have been waiting much too long for that right to be respected.”

Waraich reiterated the importance of keeping the advancement of Afghan women’s rights at the core of the narrative.

“These gains did not come easy, they were the result of long and tough battle – and they must not be allowed to be reversed,” he said. “The women of Afghanistan have been among the loudest voices for peace. But for any peace process to be worthy of its name, it must put Afghan women and their concerns at its heart. They must be heard not ignored or silenced.”

The group currently has 20 members, including the U.S., Qatar, and France, as well as support from international unions such as the African Union.