Stefanos Xenarios is a Professor at Nazarbaev University, Kazakhstan and co-editor-in-chief of the Central Asian Journal of Water Research; Iskandar Abdullaev is Deputy Director, CAREC Institute, China and Vladimir Smakhtin is Director, UN University Institute for Water, Environment and Health, Canada and series editor of the Routledge publishers' Earthscan Series on Major River Basins of the World, in which the Aral Sea Basin Book is the latest addition. 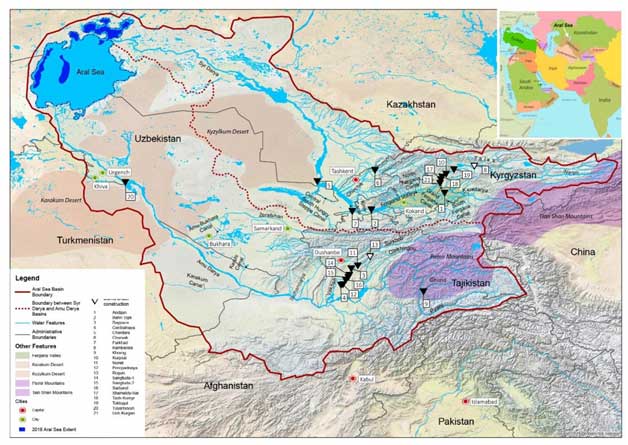 And unless well-funded and coordinated joint efforts are stepped up, with competition replaced by cooperation, ongoing over-withdrawals compounded by climate change will cause dangerous water shortages in this huge, highly complex watershed spanning six nations: Afghanistan, Kazakhstan, Kyrgyzstan, Tajikistan, Turkmenistan, and Uzbekistan.

That’s the key message of a new book co-authored by 57 regional and international experts from 14 countries and the United Nations, who spent years examining a suite of challenges in the Aral Sea Basin.

The new book assembles the views of nearly all major regional and international experts on the great challenges faced in the Aral Sea Basin. They include three co-authors from the UN University’s Institute for Water, Environment and Health, in Hamilton, Canada.

And almost half of the authors are based in Central Asia, creating a unique blend of regional and international voices and expertise on these critical issues.

The Basin’s two major rivers, the Amu Darya and Syr Darya, discharge now only about 10% of what flowed into the Aral Sea until the 1960s, shrinking the sea by more than 80 percent — “one of the world’s most severe and emblematic environmental disasters.”

Freshwater is key to food, energy, environmental security and social stability among the six Aral Basin countries. And given the countries’ prospective economic and population growth, reliance on water resources will increase, compelling cooperation in sharing benefits and reducing costs.

Intensive, wasteful irrigated farming when the nations were part of the Soviet Union was the main cause of the Aral Sea drying up and irrigation continues to consume about 90 percent of the total water withdrawal in the Basin, with agriculture contributing from 10 to 45 percent of GDP, and 20 to 50 percent of rural employment.

Most irrigation, hydropower and other water-related infrastructural systems and facilities are in transition, a blend today of past and present. Unfortunately, the existing observational meteorological and hydrological networks in the Basin, which declined in the 1990s when the Soviet period ended, are insufficient to support informed water management, and regional water data sharing is suboptimal.

Degradation of land and water are among the major hindrances to sustainable development in the region, with land degradation alone estimated to cost about US$3 billion of losses in ecosystem services annually.

There has been uneven progress across the countries on the Sustainable Development Goals (SDGs), and particularly Goal 6 (Clean Water and Sanitation), with contrasting progress also between urban and rural populations within each nation, most particularly Afghanistan.

The new book suggests a number of interventions and initiatives to end and reverse deterioration of the Aral Basin. For example, if existing large hydropower projects were managed in a collaborative manner, they can bring all countries multiple benefits, including improved reliability of supply and availability of water for agriculture, domestic use and electricity generation.

Monitoring of snow and glaciers in high altitude mountain areas, as well as permafrost, is essential for sound estimates of water availability and water-related hazards. Such systems need to be re-installed.

Existing regional frameworks must either be reformed or replaced by new mechanisms of cooperation in order to successfully translate political will into highly effective, integrated regional water management.

Reforming the water sector, however, goes well beyond new policies and initiatives, updating the legislative framework, and building new institutions. A key challenge is to achieve continuous, strong, high-level political engagement throughout the Basin countries, the active participation of stakeholders, and technical and financial support.

The Aral Basin’s many water-related issues must be addressed jointly by all involved states within the concept that water, energy, and food issues represent a critical, interlinked nexus of needs.

Major geopolitical and economic development interests are placing increasing pressure on countries of the Basin to end resource competition and find a way to closer cooperation and effective pursuit of their shared interests.