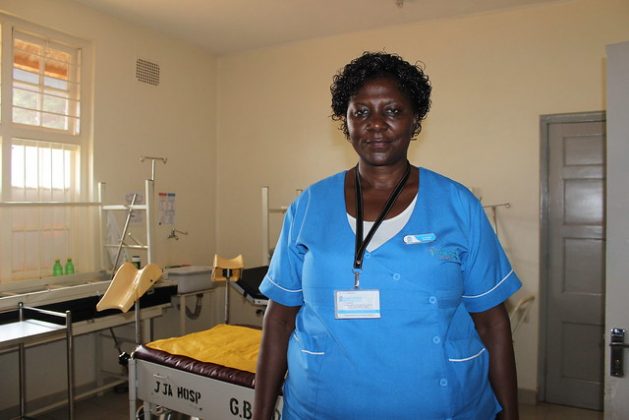 A United Nations report states that the fact that women make up 70 percent of the global health workforce puts them at greater risk of infection. This is a dated photo of Catherine a nurse at Jinja referral hospital,in Uganda. Credit: Lyndal Rowlands/IPS.

UNITED NATIONS, Apr 3 2020 (IPS) - As the number of coronavirus cases continues to grow, concerns are simultaneously growing about the current and long-term effects this will have on certain demographics — specifically, women, the youth, migrant workers, and many employees around the world.

This week, the United Nations launched a report “Shared Responsibility, Global Solidarity: Responding to the socio-economic impacts of COVID-19” that detailed how these communities are affected disproportionately by the current pandemic and quarantine.

A burden on women

At the centre of it remains one demographic that likely bear the strongest brunt of it: women.

“The fact that women make up 70 percent of the global health workforce puts them at greater risk of infection,” read part of the report. “The current crisis threatens to push back the limited gains made on gender equality and exacerbate the feminisation of poverty, vulnerability to violence, and women’s equal participation in the labour force.”

But just because women make up almost three-quarters of global healthcare professionals, does not mean they’re given the proper respect. According to a March 2019 report by the World Health Organisation, despite having such a crucial role in the public health industry, women continue to face various kinds of abuse or negligence in society, including but not limited to being attributed to a “lower status” or engaging in paid and often, unpaid roles, and being subject to gender bias and harassment.

Meanwhile, given such a large percentage of the workers are women, the requirement of child-care can hinder a woman’s ability to work during the pandemic. According to the Centre for American Progress, currently millions of healthcare workers have a child under the age of 14, who might be struggling to manage between going to work and taking care of their children.

“Because mothers’ employment is especially likely to suffer when they cannot find reliable child care, this finding suggests that millions of vital health workers currently could be struggling to secure child care, endangering their ability to work at a moment when the U.S. health care infrastructure is already spread too thin,” the report reads.

At the launch of the report, U.N. secretary general António Guterres called for policies to not only address the pandemic and contain its spread, but also that would adopt measures to address the long-lasting impact of the crisis. He called for “designing fiscal and monetary policies able to support the direct provision of resources to support workers and households, the provision of health and unemployment insurance, scaled up social protection, and support to businesses to prevent bankruptcies and massive job losses.”

Another demographic that is deeply affected as a result of the pandemic are migrant workers, according to the report.

“Migrants account for almost 30 percent of workers in some of the most affected sectors in OECD countries,” read the report. “Massive job losses among migrant workers will have knock on effects on economies heavily dependent on remittances, such as El Salvador, Haiti, Honduras, Nepal, Tonga, Tajikistan and Kyrgyzstan.”

The International Organisation for Migration (IOM) in Nepal cites the government’s figure that estimates between 700 000 to 800 000 Nepali migrants workers in India.

“With the outbreak of COVID-19 and measures by the GOV to mitigate the risks, country is in a national lock – down. Economic production has stopped and many seasonal Nepali migrant workers had to stop working,” Lorena Lando, Chief of Mission at IOM Nepal, told IPS.

“Thousands returned back to Nepal before the lock down, others are still in India but unable to work. Many of the migrant workers are daily wages earners, and now they no longer have an income to support their families. Even for those that return back home, job opportunities will be scarce, keeping in mind that was the first reason why they travelled abroad for work.”

“The economic impact of COVID-19 in countries such as Nepal will be much bigger than other countries, and while some actions to take are good for the short term, other will need be a socio economic recovery response in longer vision,” she added.

Beyond migrant workers, International Labour Organisation (ILO) estimates that the current crisis in the labor market could see between five and 25 million job losses.

“The current crisis exacerbates the feminisation of poverty, vulnerability to violence, and women’s equal participation in the labour force,” the report noted, highlighting that even amid joblessness, women will be affected disproportionately.

Furthermore, connectivity to the internet, especially at a time when all work and courses are moving online, is also of priority. The report states that currently an estimated 3.6 billion of the world’s population remain without connectivity, which means they may not have access to education, health information and telemedicine.

As advocates had told IPS last week, digital access and internet connectivity is key at this time in order to ensure communication among communities.