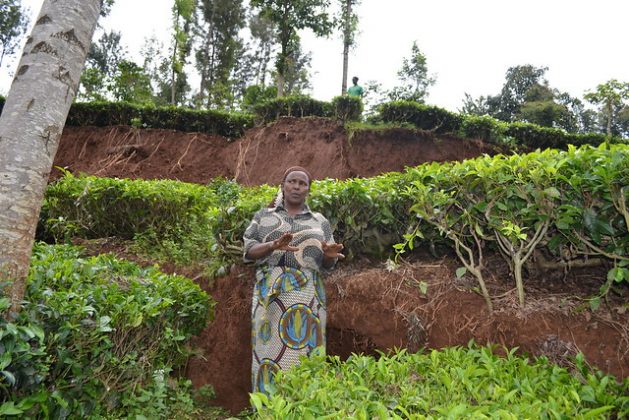 How inclusive is activism and discussions on climate change? Most environmental movements and organisations in the United States and Europe are primarily white and middle class, and hold vast amount of resources and set the agenda for policy work and ecosystem recovery. This dated photo shows a landslide in central Kenya that resulted after intense rainfall - one of the consequences of climate change. Credit: Isaiah Esipisu/IPS

UNITED NATIONS, Sep 25 2020 (IPS) - Wrapping up Climate Week at the United Nations General Assembly, global leaders called for climate action that may be “ambitious but achievable” and called for climate measures that would “leave no one behind”. But some climate activists remain concerned about how this can be achieved.

“The environmental movements in the United States and Europe are primarily white and primarily middle class,” Tara Villalba, a Filipino climate activist in the U.S., told IPS. “These mainstream environmental organisations hold vast amounts of resources (in the form of land, money, other property, and influence), and they are in charge of how those resources are used in ecosystem recovery and in policy work: our solutions are not taken seriously.”

Villalba spoke to IPS following Thursday’s Climate Change Roundtable hosted by the U.N. Secretary-General, in the same week as a significant pledge made by China to achieve “carbon neutrality” by 2060.

“But the climate emergency is fully upon us, and we have no time to waste,” U.N. Secretary-General António Guterres said in his speech, as he also called for climate action efforts to “leave no one behind”.

While leaders, including the United Kingdom’s Prime Minister Boris Johnson, applauded this effort by China, they also reminded listeners of the grave situation the world is in currently — at the meeting point of a climate crisis and a global pandemic.

European Union President Ursula von der Leyen shared how the pandemic has only highlighted the glaring holes in how we live and build.

“[The] corona pandemic has not lowered the threat of climate change,” she said. “On the contrary, it has made us aware of the fragility of our life on this planet.”

She added that recovery from this moment will require “substantial investment” to ensure that economies are moving forward.

“It will require a determined action to leave no one behind,” she said,  announcing the EU’s agreement to make Europe the first climate neutral continent in the world by 2050.

“The European leaders have decided to set up the next generation EU: this is a €750 billion recover and resilience fund that will invest in Europe’s green and digital transition for building a resilient and competitive economy,” she said. At least €275 billion has been budgeted for environmental and climate goals.

Despite these big promises and gestures, there are some who believe that a lot more work needs to be done to ensure those at the grassroots level are being included in the conversation.

“Our solutions are not taken seriously,” Villalba, who has worked in the climate movement for 15 years, told IPS. “Racism makes white people think that they are the best people to decide how to use those resources. Classism makes wealthy people decide they are the best decision makers and that power should be theirs. They want to “help” people like us but charity is not what’s needed. Power and wealth need to be redistributed so that we can all be less at-risk.”

She also painted a comprehensive, all-encompassing picture of how different social issues are intricately linked with climate justice concerns.

At the center of racism, and classism, she says is “an oppressive system that distributes resources.”

“Poor people and people of colour live with pollution. Poor countries have become the trash dumps of rich countries,” she said, drawing a parallel to a food chain where something as vast as climate change can trickle down to affect people on an individual level.

“Our work wears down our bodies faster because we cannot regenerate when we can’t sleep, eat, and live properly. But the people, communities and ecosystems that are being most severely impacted are where people of colour and poor people live and work and play,” she added.

Villalba, a single mother, is raising three children and is an organiser for housing justice: all factors that she says play into, or add to, the climate crisis.

“Many environmental activists assume people like me are not interested in climate activism. But we are. We have the most to lose – we lose our livelihoods and our families face risks first in ANY crisis – whether it is the COVID crisis or the climate crisis,” she said. “Fight because climate solutions MUST come from people like me. People who can barely make ends meet, and people who cannot meet all their needs to be able to live.”