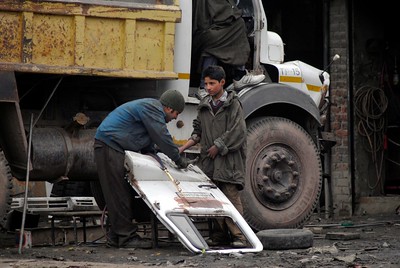 A 2009 study found that almost 250,000 children worked in auto repair stores, brick klins, as domestic labourers, and as carpet weavers and sozni embroiderers in Jammu and Kashmir. Laureates and global human rights activists have renewed their call for world leaders to double their efforts in protecting children from child labour and child trafficking during the COVID-19 pandemic and beyond. Credit: Umer Asif/IPS

MBABANE, Sep 11 2020 (IPS) - Addressing delegates at the end of the virtual 3rd Fair Share for Children Summit, 2014 Nobel Peace Laureate Kailash Satyarthi told global citizens that “business as usual” in dealing with COVID-19 is not going to be tolerated.

“We’re not going to accept the miseries of child labour and trafficking to continue to be normal,” he said.

The two-day summit, which concluded yesterday Sep. 10, saw laureates and global human rights activists renew their call for world leaders to double their efforts in protecting children during the COVID-19 pandemic and beyond.

“My dear children, we’re here to tell you one thing; we’re not going to fail you,” Satyarthi said, assuring the children of the world of their commitment.

“We’re not going to leave you. We’ll stand by you and fight for you,” he said during his concluding remarks. He demanded that the fair share for children must become the new normal.

Satyarthi, who is the founder of Laureates and Leaders for Children which hosted the summit,  further demanded that governments should establish social safety nets for the poor because they are the ones most impacted by the pandemic and that, once the COVID-19 vaccine is available, it should be accessible to everyone in the world.

Satyarthi pinned his hope on the youth whom he applauded for showing leadership during the Summit through their participation and speaking in support of children’s rights.

“Your authority, energy, vision and leadership are definitely a ray of hope in these difficult times,” she said.

He further called on the youth to continue campaigning for children should because the world cannot afford to lose an entire generation.

“Protection of children is not only affordable, but it is also achievable,” concluded Satyarthi.

“If we fail, we’re accomplices, we’re guilty of betraying children,” he said.

Ramos-Horta said destitute children are the most impacted by COVID-19 because they do not have access to clean water, three meals a day and no longer go to school.

Rula Ghani, the First Lady of the Islamic Republic of Afghanistan, called upon adults to be responsible not only for their own children but for every child throughout the world. She said it is everyone’s responsibility to nurture every child they can reach because each one has a potential for greatness and distinction.

Ghani decried the fact that wars and conflicts are tearing apart the very fabric of society in such a way that the sense of security, the comfort of belonging to a caring group and certainty of a bright future are fast becoming a luxury of a few.

“In a world where the social compact between society and its members no longer carries any meaning, where even medical emergencies such as COVID-19 can wreak havoc because of the absence of thoughtful coordination and prevalence of political interest, it is high time to stop and reflect,” she said.

While the world is battling with the worst global crisis since World War II and the most significant economic challenge since the great depression, it is also facing the biggest political crisis where presidents do not know how to tell the truth, observed Prof. Jeffrey Sachs, Professor at Columbia University. Sachs, who is also the director of the United Nations Sustainable Development Solutions Network, said the world is also dealing with the abuses by political leaders who do not care and are not transparent.

“The humanitarian crisis is deepening dramatically, and we don’t even know the extent of it because it is moving faster than our data can keep up,” he said. “We know that hunger is rising, destitution is rising, and desperation is rising.”

Sachs recommended turning to the multi-level institutions in the short term, especially the International Monetary Fund (IMF) which he said has done an excellent job of providing emergency assistance.

He called on the IMF, World Bank and other international financial institutions to provide far more resources, without the usual conditionalities. This will help avert a hunger crisis, the massive rise of deaths because of the diversion of health and medical personnel and greater levels of deprivation.

“The IMF has emergency financing facilities that have provided more than US$ 80 billion since the start of the crisis, but we need vastly more than that,” said Sachs.

Peter Kwasi Kodjie, secretary-general of the All-Africa Students Union, also called for more financial resources to be directed to children. While pleading with leaders to accept the reality of COVID-19 as the new normal, he said it cannot be the new normal for the many children who go to bed hungry because they no longer go to school. He noted that many children face the risk of not returning to school.

“Young people of the world are asking for a fair share of the money to be allocated to children who are marginalised to avoid disaster,” said Kodjie.

José Ángel Gurría, secretary-general of the Organisation of Economic Co-operation and Development (OECD), also called on countries to ensure that children get a fair share of the global response to the pandemic.

“You can count on the OECD to help countries to put children at the centre of their social policies,” said Gurria.

This was the first Laureates and Leaders for Children Summit to be held virtually owing to the pandemic.