Prisca Chaoui is Executive Secretary of the 3,500-strong Staff Coordinating Council of the UN Office in Geneva (UNOG) and Ian Richards is former President of the Coordinating Committee of International Staff Unions and Associations, and an economist at the Geneva-based UN Conference on Trade and Development (UNCTAD) 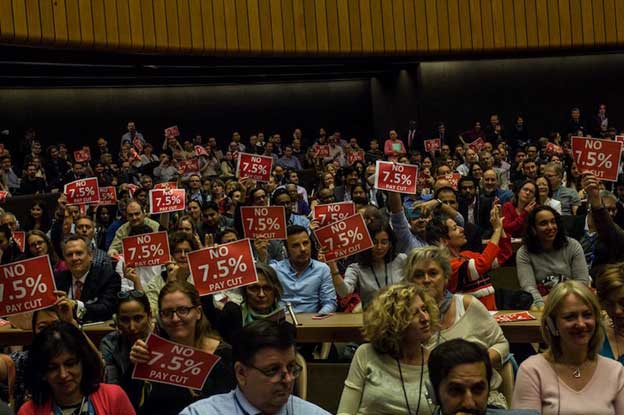 GENEVA, Sep 29 2020 (IPS) - As the United Nations prepares to celebrate its 75th anniversary we have been made aware of an extremely worrying development concerning the future of UN staff contracts.

It seems that UN management is bringing forward plans that, if implemented, will rip up long-established, secure standards of employment and replace them with a model that follows much of the ethos and practices of the ‘gig’ economy, famously characterized by Uber and its contractor drivers.

On Tuesday 29th September, managers from across the UN system will hold a meeting to look at a report on the ‘Future of the United Nations System Workforce’. The report, prepared under the guidance of International Labour Organization (ILO) Director-General Guy Ryder and UN Secretary-General Antonio Guterres, contains much to alarm us.

Instead of understanding the importance of stable, secure contracts of employment to staff during these difficult times, the report recommends a drive to ‘a more agile model contractual modality’, a move that we believe is designed to move staff to short, limited duration contracts.

One crucial section of the report speaks of a new model contract supporting ‘a more agile organization that can rapidly adapt to changing needs and opportunities and scale up and down as needed’. The report notes that these so-called agile contracts could progressively apply to all staff, replacing fixed term and continuing contracts.

The way agile contracts work is that staff would be hired for fixed periods for specific tasks, after which they would be forced to leave and return to their country. They would then have to reapply for a new job and start again from scratch.

There would be no pension scheme and the UN would wash its hands of any long-term obligations towards its loyal staff, many of whom have sacrificed their personal lives in isolated and dangerous locations.

We saw something similar before with contracts called appointments of limited duration, under which staff received a fixed amount with no additions for post adjustment, dependency or education allowance, and no salary scale to ensure equal pay by gender. (Interestingly, Ban Ki-moon abolished them because they were seen as contrary to fair labour standards).

This is revealing as it points to a deliberate ending of career appointments, in particular continuing appointments, an area of concern that we have already brought to your attention.

The rationale for the plans is that the UN needs to have greater agility and responsiveness in dealing with challenges and world events and deliver this in the context of funding constraints and a downturn in the global economy.

We recognize this situation, but are hugely disappointed to see the solutions proposed by the organization, which singularly fail to appreciate the critical importance of the established contracts that sit at the heart of the relationship between staff and employer.

We also believe that if managers want agility, then this is better achieved by investing in training, empowering staff to try different roles, and re-establishing the link between performance and promotion.

Lastly, we are concerned that management’s plans ignore the main reason that UN staff have contract security. It is to be able to act independently from pressures that may be exerted by member states and ensure they are not put in the position of doing the bidding of whichever country or corporation donates the most money to ensure their next job.

We have seen during the pandemic how even the perception of such influence can create huge problems for a UN organization.

For this reason, we call on management to drop their plans for Uber-style contracts at the UN.