Shudarson Subedi is past president of the National Federation of the Disabled, Nepal, an Australian Award Global Alumni member and Ashoka Fellow; and Simone Galimberti is the Co-Founder of ENGAGE, , Inclusive Change Through Volunteering 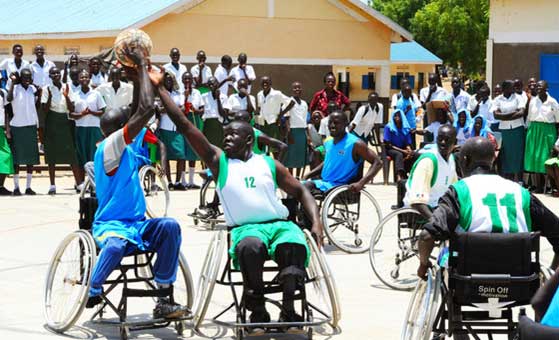 The focus of the International Day of Persons with Disabilities, which falls on 3 December, is the link between the empowerment of people living with disability, and the 2030 Agenda for Sustainable Development, the UN’s blueprint for a better future for people and the planet. Credit: UN News

KATHMANDU, Nepal, Oct 15 2020 (IPS) - The lack of consistency and a patchy approach undermines the Government of Nepal’s credibility in fulfilling the rights of persons with disabilities. One step forward and several steps back.

If we want to describe the current progress being made by the Government of Nepal to promote the rights of persons with disabilities, it is a story of high hope that slowly turns gloomier and gloomier, giving room to frustration and despair.

The optimism stems from the Disability Rights Act that was enacted in 2017 after intense lobbying from thousands of disability rights activists.

It was an important turning point for the country as the new piece legislation replaced the previous Disabled Persons Welfare Act of 1982, shifting from a welfare approach to disabilities to a right based one.

The old legislation was a marked stain in the complex process of national reconciliation and social inclusion undertaken by the country in the aftermath of the civil war.

A new constitution passed in 2015 had turned the country in a federal and nominally pluralistic nation founded on the concept of nondiscrimination, social inclusion and equal opportunities for all.

The premises were all rosy.

The Disability Rights Act had finally aligned the country’s aspirations for a better future for all closer to the principles enshrined in the Convention on the Rights of Persons with Disabilities.

With a more comprehensive recognition of all types of disabilities, including autism, hemophilia, and an important acknowledgement of mental health, the new act finally met the needs of millions of citizens living with disabilities in Nepal.

Instead, what seemed to be the herald of a new social inclusion era for persons with disabilities, proved to be the beginning of a backsliding of their rights, furthering detaching them from the rest of the society.

Certainly, the new legislation is not perfect itself especially as its wordings still reflect a misplaced medical perspective that was mainstream just few decades ago.

It is a wrong understanding of disabilities, one too much focused on rehabilitation rather than the full integration of persons with disabilities in society.

This approach is in breach of Article 19 of the Convention on the Rights of Persons with Disabilities 2006 that claims the right for persons with disabilities to live independently and be included in the communities.

The issue is not just merely conceptual.

At stake is the imperative of ensuring that all barriers existing in the society, physical and also those more imperceptible, fueled by entrenched biases within the society, are removed.

The Convention is founded on certain cornerstones, including ensuring the respect for inherent dignity, individual autonomy including the freedom to make one’s own choices, and independence of persons, non-discrimination and full and effective participation and inclusion in society.

The Committee on the Rights of Persons with Disabilities, the toothless international mechanism in charge of monitoring the respect and implementation of the Convention, had questioned many of the provisions of the new legislation.

In its Concluding Observations issued in March 2018, the Committee had taken several exceptions, in particular recommending that “Nepal adopts a human rights model of disability that stresses human dignity of persons with disabilities and conditions arising from interactions with various barriers that may hinder their full and effective participation in society on an equal basis with others”.

Moreover, the act included clear dispositions to ensure their rights to livelihoods, so fundamental if we want to get rid of the existing status quo where the majority of persons with disabilities remain unemployed.

Millions of citizens in the country were hopeful for a real change.

Unfortunately, the Government showed much less progressive attitudes in drafting the law’s regulations.

Instead of bringing more clarity and helping create an environment supportive of the rights of persons with disabilities, the regulations show a regression.

Approved on 17 August 2020, their focus is almost exclusively on the most severe cases of disabilities where citizens require continuous assistance, depriving, in such way, others citizens with less severe forms of disabilities, from any support.

This is a complete disregard of the rights of millions of remaining citizens living with disabilities struggling every single day to make their ends meet.

Similarly, the same attitudes are visible in relation to the rules regulating monthly allowances for them.

Also, in this case, only the most severe citizens living with disabilities were allowed to receive a small, almost insignificant monthly financial support.

Only in the first week of October 2020, the regulations of the Social Security Act, after intense lobbying involving thousands of widowers also discriminated by the law, were changed to include better, though still too narrow, provisions.

Again, this forced turnaround is the wrong solution to the problem as it is the Social Security Act that instead should be properly amended.

In general provisions, like the right to free education and free health care together with other essential rights in matter of livelihoods, must be addressed holistically and with determination if we want to uplift the living conditions of persons with disabilities.

Such equity-based measures are indispensable not to create dependency but rather to help leveling the playing field for all, a goal far from being achieved.

The political leaders must be determined to put an end to an approach to disabilities that has become a mockery of the Government of Nepal’s international obligations.

The state must mobilize all its strengths to ensure that citizens with disabilities are not citizens of a lesser nature but are instead recognized for the contributions they can provide to the society if their inalienable rights are protected.