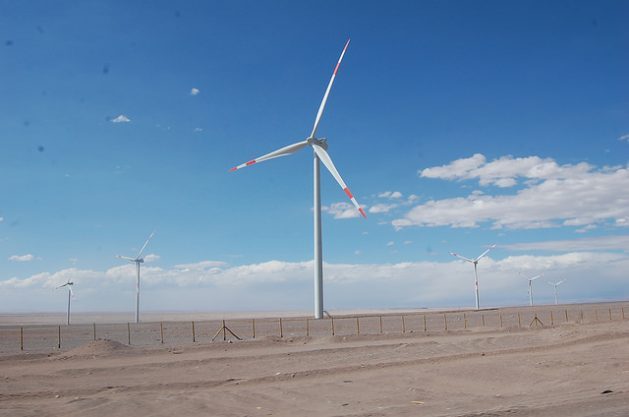 Windmills in Calama, in the Atacama Desert, in northern Chile. The projects in Chile to take advantage of its high potential in unconventional renewable energies have managed to reduce the country's dependence on imported fossil fuels and to reach a fall in the general cost of energy. Image: Marianela Jarroud / IPS

MEXICO CITY, Oct 2 2020 (IPS) - The way forward for energy transition and its link to an economic recovery after the depression caused by the covid-19 pandemic is focusing attention in Latin America and Europe, according to the 2nd Madrid Energy Conference (MEC), which concluded this Friday 2.

The intercontinental forum was held since Monday, September 28, in this case virtually due to the pandemic, organized by the non-governmental Institute of the Americas (IA), which is headquartered in the coastal town of La Jolla, in western United States.

Jorge Rivera, Panama’s Secretary of Energy and one of the sector’s leaders in Latin America who participated in the Conference, stressed that the transition is not an automatic process, but depends on a political decision and on the sector’s corporations.

“We have a great opportunity. We have an energy transition agenda for the next 10 years, aligned with the Sustainable Development Goals (SDGs), which includes a series of national strategies, decarbonization, digitalization, and energy democratization. We have a lot to do in transportation, industry, in the uses of energy,” he said.

Rivera insisted that “these measures have the potential to become a tool for post-covid economic recovery.

The Conference, which lasted five days and whose first edition took place in 2019 in the Spanish capital, brought together virtually ministers from five American nations, more than 20 companies´ presidents and more than 400 delegates from international organizations and experts from both continents.

The agenda addressed issues such as the climate crisis in the context of the pandemic, the situation of renewable energy on both sides of the Atlantic Ocean, the financing of post-covid recovery, the energy transition towards lower carbon models, energy storage in batteries and power grids, as well as different aspects of mobility.

Topics such as transport, gas, the outlook for oil corporations or the digitalization of the sector were also tackled.

An important part of the debates was linked to the climate crisis, such as carbon capture and storage and greenhouse gas emissions generated by human activities responsible for global warming, as well as methane and the prospects of hydrogen, seen as an alternative to fossil fuels, on both continents.

For Alfonso Blanco, OLADE – Latin American Energy Organization’s executive secretary, the region has made significant efforts to accelerate the transition, but the impact of Covid-19 has generated an uncertain outlook. 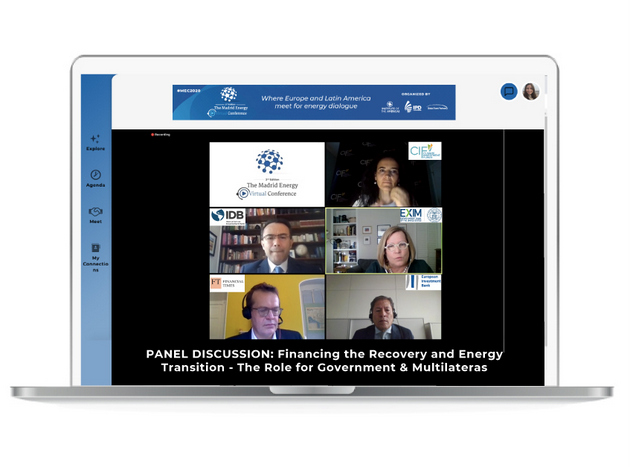 One of the debate sessions of the Madrid Energy Conference, dedicated to the energy transition, which held its second virtual edition, between September 28 and October 2, organized by the Institute of the Americas. Image: IA

“Sustainability will depend on regional measures, but the region does not have a defined regional action. If we do not analyze the (financial) risk and develop a financing model for renewables, we will see problems of further incorporation of renewables. We have to think of specific strategies, according to the role of each sector,” he said.

In recent years, Latin America has advanced in the development of wind and solar sources as clean alternatives, but it faces the challenge of reducing the burning of fossil fuels in industry and transportation and improving energy efficiency.

This transition has come to a halt in nations such as Mexico, which prioritize support for hydrocarbons, as pointed out by Joost Samsom, partner and co-founder of the consulting firm Voltiq – Renewable Energy Finance, and Claudio Rodríguez, partner of the law firm Thompson & Knight LLP.

Stuart Broadley, executive director of the non-governmental Energy Industries Council (EIC) – based in London and which brings together energy companies – explained that phase I of the energy transition, currently underway, consists of the adoption of technologies such as wind and solar, and during which most countries have not invested much for different reasons.

Phase II, which the world has not yet entered, involves energy variations such as hydrogen and carbon capture and storage (CCS).

Broadley said that companies dedicated to promoting renewable sources are not going to invest in hydrocarbons and do not like oil companies jumping into their market, so they are not going to help each other. In view of this, regulations imply or should imply forcing them to work together and, for this, the government’s role is critical.

For Fernando Cubillos, head of Energy at IDB Invest, the private investment arm of the Inter-American Development Bank, renewable energies have shown resilience during the pandemic, competitiveness and attractiveness.

“The possibilities of reviving the economy may give a chance to introduce more renewable energy, which can help the recovery, and there is an opportunity to deploy more renewables. We see good conditions for renewables today. What is missing in some countries is the regulatory framework,” he said during the discussions. 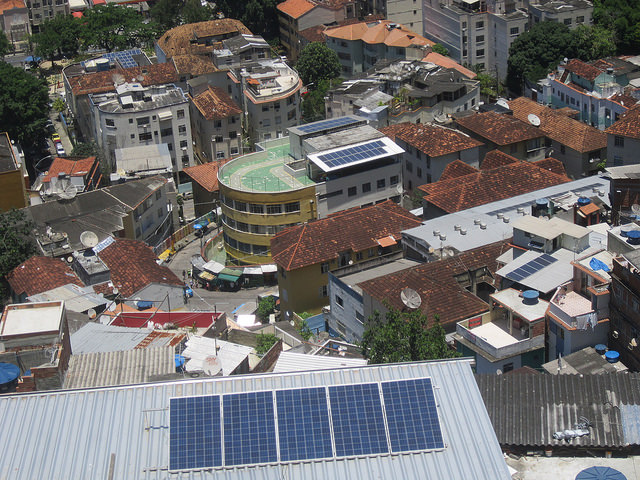 The installation of photovoltaic panels in poor neighborhoods in Brazil, like these in Morro de Santa Marta, in Rio de Janeiro, which often respond to community and distributed generation projects. They also contribute to reducing the energy bill in these populations and moving towards sustainable generation and consumption. Credit: Mario Osava/IPS.

In nations such as Brazil, distributed (decentralized) and small-scale solar generation has become important on a commercial scale and has registered growth, which was possible thanks to the regulatory framework.

“We have seen that state-of-the-art technology is wind and solar, due to low costs, and it is very difficult to expand hydropower generation. We have seen potential for battery storage, but it’s not attractive yet”, Thiago Barral, executive president of Brazil’s state-owned Energy Research Agency, analyzed during the MEC.

Although the energy transition is in its first phase, Latin America is beginning to consider emerging technologies, such as CCS and hydrogen, whether from gas or renewables.

In the first case, CCS, the intergovernmental International Energy Agency (IEA), which brings together major industrial countries and is based in Paris, said that by 2020, governments and industry have committed around some $4 billion to such initiatives worldwide.

In the world, there are at least 15 projects in operation and seven under construction, but during the MEC experts estimated that at least 500 are needed globally.

The use of hydrogen is an unknown variant in the Latin American region. At the beginning of this century, Brazil was a pioneer in exploring this path, but abandoned it to develop sugar cane ethanol, renewable sources and hydro energy.

Chris Sladen, founder and director of the UK-based consulting firm Reconnoitre Ltd, said CCS “has been a dream for hydrocarbons. But it’s not a simple concept, it involves several joint projects” and the big question is how to take them to a commercial scale.

That technology, he proposed, should occur close to where carbon is generated, such as power plants, petrochemicals or cement factories.

Some 50 countries, most of them in the developed North, have instituted policies for the use of hydrogen. In Latin America, Chile has the potential to produce this resource at low prices and that can be a mitigation measure for a cleaner electrical matrix, according to its Undersecretary of Energy, Francisco López.