NEW DELHI, India, Dec 14 2020 (IPS) - Decades of aggressive efforts to create equal opportunities for women, shatter the glass ceiling and build a more inclusive society only ends up in failure, when the key stake holders refuse to acknowledge discriminatory laws, socio-cultural and religious set ups that continue to threaten progress made by the female work force. 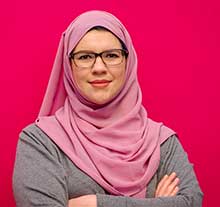 British Egyptian writer Yousra Imran’s book ‘Hijab and Red Lipstick’ gives a sharp insight into the lives of women in Saudi Arabia, Qatar and the United Arab Emirates (UAE). Sara, the protagonist in the book is torn between her father’s conservative interpretation of Islam, his need to control and protect her from everything he calls “haram”, a term used for ‘forbidden’ in Islam and her desperate bid for freedom from life under the guardianship system.

“The current challenges for women in the Gulf and some Middle Eastern countries is that despite modernization the law still sees women as minors when they are unmarried women, and if they do get married, legally they move from being under the guardianship of a father or brother to the guardianship of their husband.

“Women just want their own agency – the ability to make decisions without needing a written letter of permission or no objection letter from a male guardian”, says Yousra Imran to IPS. She is the author of the book Hijab and Red Lipstick.

The United Nations Sustainable Development Goal 5 (SDG) that aims to achieve gender equality and empower all women and girls still remains a challenge in many parts of the world.

According to the United Nations Development Program (UNDP), “In Arab region, women face high barriers to entry into the labor market and are at the risk of unemployment than men.”

The latest policy brief from the UN on The Impact of Covid-19 on Women, states that “The coronavirus outbreak exacerbates existing inequalities for women and girls across every sphere – from health and the economy, to security and social protection. The pandemic has also led to an increase in violence against women and girls – particularly domestic violence which has intensified.”

Ending all forms of discrimination against women and girls, are crucial accelerators for sustainable development goals. Sexual violence and exploitation, division of unpaid care, local domestic work and discrimination in public offices, all remain huge barriers in the progress of SDGs, according to the UNDP.

It is important for the Middle East region to acknowledge women’s right as a human right and build an eco system that doesn’t lead to intensification of the authorities crackdown against women and women’s right defenders in the country.

In 2016, a historical attempt was made by 14,000 Saudi women when they handed over a petition to the government, calling for an end to the country’s male guardianship system. The women in Saudi Arabia refused to be treated as “second class-citizens” and demanded to be treated as “full citizens”.

Among other things, women could travel without the permission of a male guardian, apply for and obtain passport over the age of 21, register a marriage, divorce or a child’s birth. While these efforts were welcomed, they were far from the abolishment of the guardianship system. Women still can’t marry without the permission of a guardian, or provide consent for their children to marry. Women can’t leave prison, exit domestic violence shelter or pass on citizenship to their children without permission from their guardian.

“There have been a few improvements in recent years “, says Yousra. Women in Saudi Arabia getting the right to drive, and greater emancipation of women into leadership roles and into the workforce across the Gulf, however, the legal system itself still needs addressing and laws need to be changed, she says.

The move towards greater freedom for women in Saudi Arabia were undermined and lost, when right after the driving ban was lifted, an apparent crackdown on women got dozens of activists detained and arrested, ironically partly for calling for these very reforms. A few who are still in jails fighting for their freedom.

All of these factors will perhaps remain in violation of Saudi Arabia’s human rights obligation and its inability to realize its Vision 2030, that declares women—half of the country’s population—to be a “great asset”.

While the UAE has made several moves to overhaul some of its strictest Islamic laws and bolster women’s rights, there are still questions in regards to its obligations under international human rights law and equality of women.

Qatar too has faced questions on obligations towards women’s rights, as family laws still continue to discriminate against women, including making it much more difficult for women to seek divorce, protection against violence, including within the family. Human rights organizations have continuously called on Qatar to stop criminalizing sex outside marriage and ends its agressive enforcement of “love crimes”.

The failure to continuously acknowledge regions heavily restricted freedom of expression and civil society activities, violations by security forces continue in the context of the criminal justice systems, including torture and other ill-treatment, especially towards its women.

Despite significant progress through reforms on paper towards the lives of Arab women that has been achieved over the years, the journey ahead is still long, complex and far from meeting the Sustainable Development Goal 5 and Vision 2030.

Sania Farooqui is a journalist and filmmaker based out of New Delhi. She hosts a weekly online show called The Sania Farooqui Show where she regularly interviews Muslim women from across the world on various topics.