The city of San Salvador was built at the foot of the volcano of the same name, and the risk of landslides that cause tragedies is always present, such as the one that occurred in September 1982, in which some 500 people died in the capital of El Salvador. Turning it into a "sponge city" is the new initiative to reduce the impact of these phenomena. CREDIT: Edgardo Ayala/IPS

SAN SALVADOR, Dec 18 2020 (IPS) - The San Salvador volcano is a gift of nature for the inhabitants of the capital who live at its foot, a gigantic green lung that gives them oxygen and fresh air. But it is also a curse.

Down its slopes have come floods and landslides that have caused tragedy and death over the years. And now climate change, bringing intense and unpredictable rains, has further complicated the picture.

The soil does not manage to absorb all the water during storms and there is an ever-present risk of mudslides that drag everything in their wake down to the city, and of flooding in the urban area when the creeks and streams overflow.

"We live in a high-risk area, where there are sudden landslides, so we are creating barriers with Spineless Yucca (Yucca elephantipes) to help hold down the soil, and we are building stone walls as well." -- Trinidad Rodríguez

The United Nations Environment Programme (UNEP), together with local organisations, is implementing the City Adapt project on the slopes of the volcano, which seeks to reduce that risk for the 1.8 million people in the metropolitan area, who represent 27 percent of the country’s total population of 6.7 million.

The effort is aimed at applying environmental measures that address the effects of climate change on such tragedies, through a system that also reconnects cities and their semi-rural surroundings with nature.

“We are talking about ecosystem-based adaptation to climate change, which is nothing more than applying what nature itself can provide” to prevent catastrophic events, Leyla Zelaya, national coordinator of the City Adapt programme in San Salvador, told IPS.

UNEP seeks to implement measures using the resources provided by the local ecosystems – in this case, the coffee farms located on the slopes of this mountain that rises 1,893 metres above sea level to the northwest of the capital, where farms provide most of the green cover.

Participating in the project are 29 farms representing a total of 423 hectares of land, where measures carried out include the creation of live and dead barriers to prevent erosion and ditches in the middle of the coffee plantations to help retain rainwater and thus improve infiltration.

In addition, the restoration of 1,150 hectares of forest and coffee plantations is planned. The initiative, as a whole, has already reduced the risk of flooding for some 16,000 people and is expected to reach an estimated 115,000 by 2022.

“We live in a high-risk area, where there are sudden landslides, so we are creating barriers with Spineless Yucca (Yucca elephantipes) to help hold down the soil, and we are building stone walls as well,” Trinidad Rodríguez, a 57-year-old local farmworker, told IPS. 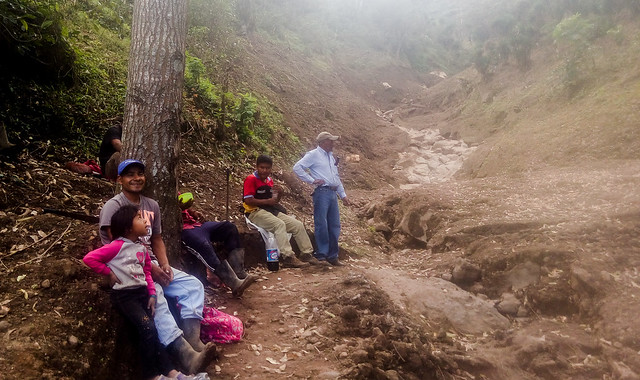 Farmers take a break from their work to reopen a road blocked by a mudslide that came down from the top of El Picacho mountain, next to the crater of the San Salvador volcano. The Oct. 29 landslide claimed nine lives, left one person missing and caused extensive material damage. CREDIT: Edgardo Ayala/IPS

He works at the Los Robles farm, perched almost at the peak of El Picacho mountain near the volcano’s crater, on slopes so steep that the risk of mudslides is always present.

A fire that broke out on the 10.5-hectare farm three years ago burnt most of the organic matter leaving mainly stone, clay and sand, making the coffee plantation even more prone to landslides.

The rains of Tropical Storm Amanda in May of this year caused several mudslides on the farm, one of them of considerable magnitude. But fortunately it did not continue all the way down to the edges of the city.

“Studies indicate that there is a risk, perhaps not imminent, but a possible risk that a landslide could reach the upper areas of the Escalon, and continue down that ravine,” added Héctor Velásquez, who owns the farm. He was referring to an upscale neighbourhood of San Salvador that he said could be reached by a landslide. 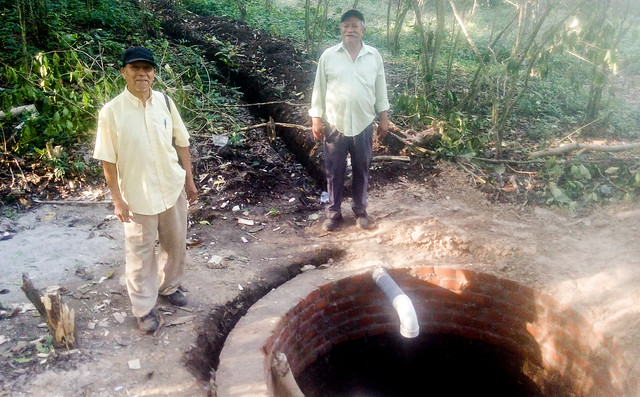 This nearly completed absorbing well at the El Espino Cooperative in the town of Antiguo Cuscatlán will absorb rainwater that would otherwise run downhill to urbanised areas on the outskirts of San Salvador. The measure is part of the City Adapt project, implemented by the United Nations Environment Programme (UNEP). CREDIT: Edgardo Ayala/IPS

The initiative seeks to make the capital of El Salvador a “sponge city” with measures to improve the absorption of water running down from the mountain and prevent it from causing destruction in the metropolitan area.

After several days of rain, a landslide on the slopes of El Picacho mountain carrying mud, rocks and trees buried several communities on the outskirts of Nejapa, a city of 30,000 people to the north of San Salvador, on the night of Oct. 29.

The catastrophe left nine people dead and one missing, as well as causing considerable material damage.

In September 1982, a similar mudslide, which also took place on El Picacho, buried part of the Montebello neighbourhood in the northwest of San Salvador claiming about 500 lives, destroying 159 houses and leaving another 2,000 people without a home.

The measures adopted by the participating farms have a direct impact on the so-called micro-basin of the Arenal Monserrat River, south of the city – the last link in the chain that receives the excess water that does not infiltrate up on the slopes of the volcano. The vegetation coverage in the basin is only 31 percent.

“Nearly 70 percent is impervious urban surfaces, so we have to see how we can give more infiltration to that 31 percent of vegetation coverage,” Zelaya said.

IPS visited the Los Robles farm and several others included in the programme, along with UNEP staff and local organisations such as the Association of Community Projects of El Salvador (Procomes), which provide technical advice.

The farms included in City Adapt are privately owned or form part of cooperatives worked collectively or individually, and were taken into consideration because of their location and the level of risk they face.

On Alberto Méndez’s El Trigal farm, 15 infiltration trenches have already been dug, with a total extension of 600 metres.

His 1.3-hectare farm is located in the hamlet of San Isidro Los Planes, in the municipality of San Salvador, and is part of the El Boquerón Cooperative Association, where each of the 68 members works the land individually. 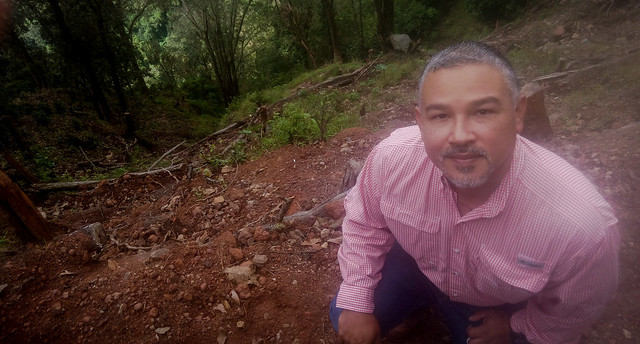 Héctor Velásquez, owner of the Los Robles coffee farm on a slope of the San Salvador volcano, shows the effects of a landslide on his coffee plantation after Tropical Storm Amanda in May. With the support of the United Nations Environment Programme, he has implemented innovative prevention measures, such as the introduction of live and dead barriers. CREDIT: Edgardo Ayala/IPS

“During the last rains I saw that it worked quite well, the water didn’t run off so much anymore, we’ve seen an improvement,” said Méndez, 77, a married father of three who has dedicated his entire life to growing coffee.

The project includes some 33,000 linear metres of trenches on the participating farms, which would represent an estimated 7,000 cubic metres of infiltrated water.

Another measure adopted is the construction of absorbing wells, which by means of trenches in the ground collect runoff water that would otherwise run down the slopes, with the risk that this represents.

Three of these wells have been built so far and a total of 30 are planned. Each one will hold an estimated 27 cubic metres of water.

In addition to the ditches, one well is already in operation and another is under construction in the El Espino Cooperative, also on the slopes of the volcano but within the limits of Antiguo Cuscatlán, a city bordering the Salvadoran capital.

“With this well we are retaining water so that it won’t cause disasters in the capital,” farmer José Luis Elías, one of the 180 farmers who belong to the cooperative, which works a total of 234 hectares, told IPS.

Some 350 families who benefited from the 1980 agrarian reform live on and work the land collectively.

Marina Granados, 53, another member of the cooperative, told IPS that she was only 13 years old when she began working in the association, and said she is proud of what they have achieved.

“We women work as hard as the men to dig the ditches, which fills us with satisfaction,” she said.

She and her fellow cooperativist and friend, María Lidia Martínez, 70, have also dedicated themselves to growing vegetables on home gardens that they have started, in addition to participating in the digging of ditches and wells.

“We have done everything in our power to help the environment,” said Martinez.