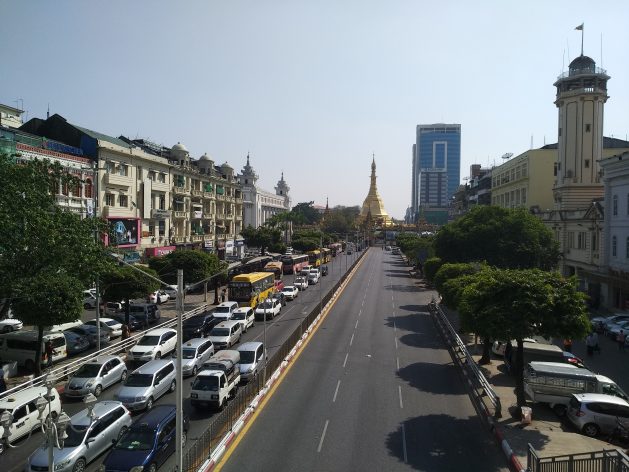 Central Yangon, Myanmar (file photo). According to locals there is a high level of uneasy calm right now and the army has focused on taking control of the capital Nay Pyi Taw. Credit: Stella Paul/IPS

HYDERABAD, Feb 2 2021 (IPS) - Yangon resident Ni Ni Aye walked to her office yesterday morning. A couple of hours before, the army had staged a coup by seizing power and declaring a state of emergency in Myanmar. Ni Aye, an employee of one of Yangon’s largest technology firms, tried to call her colleagues and family, but phone services were down. So, she decided to walk to the office and see what was happening.

“There were no armoured vehicles or soldiers with heavy weapons, yet everything was extremely quiet. It was very confusing; nobody had a clue on what is really happening. Then we realised, the action is all happening in the capital,” Ni Aye told IPS.

The realisation was, however, very unsettling for Ni Aye whose family just moved to Nay Pyi Taw — the country’s capital over 367 km north of Yangon, which is currently under COVID-19 quarantine. “I don’t know how they are; if they have food at the quarantine centre. I can’t reach them. I am very worried,” she told IPS.

As the first day of the military coup wore on, the general state of confusion and fear became widespread, according to several people IPS spoke with. Most of them said that they knew a coup could happen but did not believe it would happen so soon.

A coup in the making

However, some opposition parties, including the Shan Nationalities Democratic Party and the Kayin People’s Party, which represent minority Shan and Kayin communities respectively, complained that the elections were rigged, Htet Htet, a journalist and the general secretary of the Myanmar Women Journalists’ Association in Yangon, told IPS.

According to Htet, the signs that a coup was imminent became clear on Jan. 31 when the army said in a press statement that the government could not address the accusations of voting fraud.

Several hours later, on the morning of Feb. 1, Myawaddy — an army-owned TV channel — announced the takeover just hours before the opening session of parliament. It announced a one-year state of emergency and the handing over of power to military chief Min Aung Hlaing.

Since then, at least 24 prominent politicians, including civilian leader Suu Kyi, several members of her cabinet, student leaders and authors have been arrested, according to a social media post shared by Human Rights Watch researcher Manny Maung. 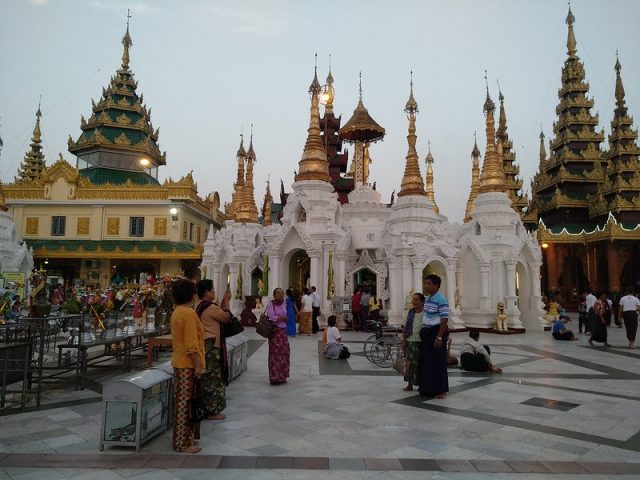 Shwedagon pagoda in Yangon, Myanmar (file photo). On the morning of Feb. 1, Myawaddy — an army-owned TV channel — announced the coup just hours before the opening session of parliament. It announced a one-year state of emergency and the handing over of power to military chief Min Aung Hlaing. Credit: Stella Paul/IPS

Impact on the Rohingya

Throughout Suu Kyi’s rule, the attacks and persecution of the Rohingya Muslims have been relentless. The minority community of 600,000 had been barred from participating in the November elections — a result of two discriminatory laws, the Citizenship Law and the Election Law.

Both laws where passed in 1982 by the then military government to disenfranchise the Rohingya and prevent them from running for office, even though most Rohingya families have lived in Myanmar for generations.

Many Rohingya leaders were hopeful that after the 2015 elections, NLD leader Suu Kyi would change these laws and policies. Instead, the NLD supported the military as it carried out ethnic cleansing, crimes against humanity, and possible genocide against the Rohingya in Rakhine State, according to activists.

“If the government really wanted to protect us it would have granted us citizenship and the right to vote and stand in the recent elections. Instead, Myanmar excluded us almost entirely from the election. Without that basic right to citizenship as Rohingya, in our name, our identity, we are still vulnerable to genocide,” Tun Khin of the Burmese Rohingya Organisation UK said in a statement on Jan. 25.

Dus Mohammed is the head of Rohingya Youth Association. In 2017, Mohammed fled Myanmar’s Rakhine State fearing an imminent attack on his life by the army. The August 2017 violence in Rakhine State resulted in more than 700,000 Rohingya fleeing to neighbouring Bangladesh.

Asked about how the coup could impact the lives of Rohingya, Mohammed told IPS that the military’s return to power will probably give them “greater freedom to persecute” the minority community. “Suu Kyi has not done anything to solve the crisis or restore the rights of the Rohingya. The army will definitely continue with the same policy of persecution, Maye with more freedom,” Mohammed told IPS from Bangkok where he now lives.

As a result, many well-known media outlets stopped selling newspapers, while the two state-owned newspapers, which are supportive of the government, have been able to continue printing.

On the morning of Feb. 1, phone services had been disrupted across Myanmar. Mobile and internet data, though not shut, was very weak. However, the Myanmar government has frequently used internet and mobile services as a tool to control the media and free speech.

In conflict areas like Rakhine and Chin States, government-imposed internet restrictions heavily affected the November elections as candidates and locals could not exchange or share information.

Prior to that, on Jun. 23 the Transport and Communications Ministry restricted 3G and 4G services, allowing only 2G data networks, which are too slow to access video calls, emails, or web pages with photos or videos.

Locals — especially members of the media — now fear that a total outage of data services under the new army rule could soon become a reality.

“Today the phones are not working. The data speed was very poor and I kept getting disconnected. But I am worried that tomorrow we could lose access to the data networks altogether,” a local journalist Hsu, who could not reveal her full name due to safety concerns, told IPS.

All through Monday, Feb. 1, activists from the NLD party urged their supporters to maintain calm and be careful about staging public protests. “Do not boil in anger, do not take any action,” read a viral message from Zae Aye Moe that was shared by hundreds of NLD supporters.

This was in contrast to Suu Kyi who reportedly wrote a letter before her detention, urging her supporters to protest.

Htay Aung, an independent political activist who had contested the November elections and was arrested by the NLD government for criticising it, also appealed for calm.

“I am very disappointed at the development, but I will not say or ask anyone to say anything else,” Aung, who was jailed for accusing Suu Kyi of misusing public funding to campaign for the elections, told IPS.

The organisation had recently published a report on the state of freedom of expression in Myanmar.

“Government and military control over public discourse and the media has significantly restricted the diversity of viewpoints online. Despite Facebook’s removal of several official military accounts and pages, the military’s messaging on certain issues, including on the Rohingya conflict and minority groups, have continued to monopolise the online narrative,” the report says.

Yesterday, however, the organisation said that it doesn’t have a statement on the coup. “I am afraid we are keeping a low profile until we see the situation,” a member from the organisation told IPS.