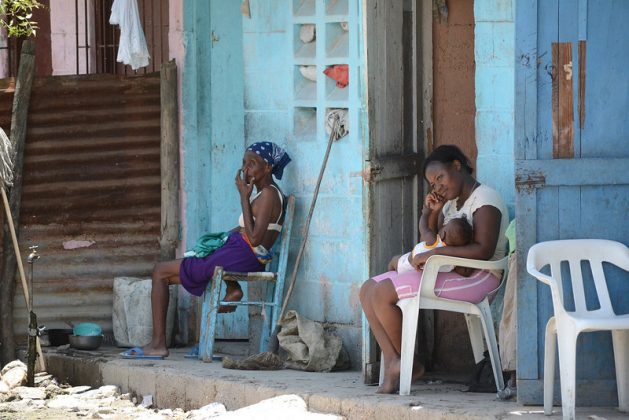 The large part of COVID-19 relief funds is going to big corporation. People who are likely to have been impacted the most by the pandemic in the Global South, such as smaller businesses, marginalised communities, women, and those in poverty, have been left out. Credit: Dionny Matos/IPS

BRATISLAVA , May 18 2021 (IPS) - Poverty and income inequality are being deepened as COVID-19 relief funds are handed out to large corporations instead of social protection programmes in developing countries, groups involved in a new study of COVID-19 bailouts have said.

A report by the Financial Transparency Coalition (FTC) civil society group showed that the vast majority of COVID-19 recovery funds in nine developing countries have gone to big corporations instead of toward welfare, small firms, or those working in the informal economy.

“The way COVID-19 relief has been implemented has worsened marginalisation, poverty, and inequality, including income, gender, and other inequalities, in some countries,” Matti Kohonen, FTC Director, told IPS.

“The large part of these relief funds is going to big corporations, but the people who are likely to have been impacted most by the pandemic in the Global South, such as smaller businesses, marginalised communities, women, and those in poverty, have been left out,” he said.

In what the group says is the first major analysis of public bailout funds disbursed in developing countries during the pandemic, FTC members looked at their use in Kenya, South Africa, Sierra Leone, Bangladesh, Nepal, Honduras, Guatemala, El Salvador, and India.

It found that in eight countries, an average of 63 percent of pandemic-related state aid went to big businesses, while only a quarter was spent on social protection schemes. Only 2 percent went to informal sector workers – despite the informal sector often making up a large part of the overall economies in many poor nations. Meanwhile, much of what was allocated to small and medium-sized companies never reached them and was diverted elsewhere, it claims.

India was examined separately because of a change in the government’s definition of a small business during the pandemic.

However, FTC believes that total corporate stimulus is likely to be even larger due to expected revenue shortfalls from tax cuts, especially in Bangladesh and India, or the cost of tax amnesty programmes, as in Bangladesh and Honduras.

Civil society groups operating in some of the countries in FTC’s report say that the findings were not entirely unexpected, but underlined the extent to which poor and marginalised groups had been apparently neglected by governments during the pandemic.

Speaking about the finding that in Kenya 92 percent of bailout funds had gone to large corporations, Chenai Mukumba of the Tax Justice Network Africa advocacy group, told IPS: “It was not surprising because the private sector has a lot of lobbying power to influence policy. But it was surprising that so little was getting to the people that needed it – the vulnerable and marginalised and especially those in the informal sector.”

In many poor countries the informal economic sector forms a large part of the overall economy with millions of people often relying solely on informal work to make a living. In Bangladesh, for instance, cash-in-hand workers make up 85 percent of the country’s labour force. The figure is similar in Kenya.

COVID-19 restrictions, including lockdowns and travel bans, have had a massive impact on such work as people have no longer been able to travel for work, or to sell goods at markets or outside their neighbourhoods. This has had a drastic effect on some families.

“Among vulnerable populations people have seen their quality of life really fall because of movement restrictions. The narrative we are hearing from people on the ground working with these communities is that there is an acceptance that governments need to bring in restrictions to stop COVID-19 spreading, but that those restrictions need to be accompanied by relief measures, and those relief measures have not been provided,” Mukumba said.

The FTC’s study focused on where COVID-19 bailout funds went, but did not go into detail about the exact reasons why they were disbursed in the way they were, nor did it look at individual disbursements to corporations or other entities.

But Kohonen and Mukumba told IPS there were a number of reasons resources did not go to social protection services, including both private sector lobbying and inadequate government capacities to identify vulnerable populations.

The report also does raise a warning about a lack of transparency around the disbursement of the recovery funds.

It cites how in Kenya, for instance, the World Bank provided $50 million in immediate funding to support the country’s emergency response – funds that are now unaccounted for.

Whatever the reasons behind the allocation of funds, the fact that so little went on social protection remains a serious problem which must be corrected, said Kohonen.

“Much more funding should have gone to social protection and too much went to big corporations which don’t need such a large proportion of relief funding,” he explained.

And even in some states where an ostensibly comparatively large part of relief funding was spent on social protection, the most vulnerable members of society still lost out.

Explaining the situation in Guatemala, where just over half of COVID-19 relief funding went on social protection measures, Ricardo Barrientos of the Central American Institute of Fiscal Studies (ICEFI) which worked on the report, told IPS: “The government response, although mainly allocated for social protection, was too little and too late, and critically insufficient to make a meaningful impact for most Guatemalans.”

He explained that as a percentage of GDP, it amounted to 3.07 percent – of the countries surveyed only Honduras and Sierra Leone had a lower figure – and while most of this money was allocated to an emergency cash transfer programme it was concentrated in cities and urban areas, and failed to reach people who needed it most, especially Mayan indigenous people living in poverty and in appalling conditions in rural areas.

“While more than 70 percent of households survive in the informal sector, accounting for around 24 percent of GDP, the relief funds were ridiculously small for this important part of the Guatemalan economically active population. Many Guatemalans found themselves in the dramatic position of having to [decide whether to] go out and try to sell something, or die due to starvation. The saying was: ‘I prefer to die from COVID-19, than from hunger,’” he said.

The FTC is currently preparing reports on the use of COVID-19 bailouts in other countries, including more developing nations as well as developed states in Europe and elsewhere.

However, it is likely, FTC members say, that in at least the developing states a similarly large proportion of the funds is likely to have gone to large corporations.

“In Sierra Leone we saw most of the relief funds going to corporates and expect it will be a similar story in other countries in Africa we are still looking at,” said Mukumba.

FTC has passed its report on to governments and major COVID-19 bailout donors such as the World Bank and International Monetary Fund. It has yet to receive any direct response.

It has also called for governments and international financial institutions to adopt a series of measures to address what it calls a “dangerous imbalance in existing COVID-19 relief funds”.

These include implementing a minimum corporate tax rate of at least 25 percent, tax hikes for the wealthy, corporations, and high-income earners, setting up public beneficial ownership registries, to know who benefits from recovery spending, and profits made during the pandemic, and introducing greater accountability to provide transparency on the conditions attached and disbursements made of COVID-19 recovery funds, including World Bank funds.