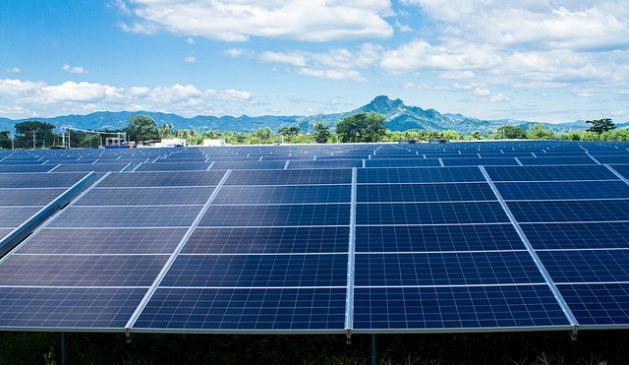 Boris Johnson’s recent pledge to cut emissions by 78 % by 2035 (compared with 1990 levels) is impressive in its ambition. Opponents are asking how such momentous pledges can be achieved. Credit: Edgardo Ayala / IPS

NEW YORK, Jun 11 2021 (IPS) - How are preparations for the Glasgow Climate Summit in November proceeding? Currently, we are more than halfway through three weeks of virtual preparatory negotiations taking place in June. These online talks are challenging in their own right, just as many had feared  (see: ‘Should the 2021 Climate Summit in Glasgow Still Take Place?’).

As we enter the final few months before Glasgow, however, there is room both for optimism and deep concern. Curiously, both of these emotions center squarely on the critical role of the host government.

The success or failure of a climate summit of this magnitude depends greatly on the role of the host government—or “Presidency”. In the past, we have seen both unfortunate missteps from the Presidency, such as Copenhagen in 2009, as well as untrammeled successes, like Paris in 2015.

The success or failure of a climate summit of this magnitude depends greatly on the role of the host government—or “Presidency”. In the past, we have seen both unfortunate missteps from the Presidency, such as Copenhagen in 2009, as well as untrammeled successes, like Paris in 2015

There are several common elements that make up a good or even a great Presidency. First, the ability to build trust among member states is critical. While this sounds simple in theory, in practice it is immensely difficult, even without the added complication of a global pandemic creating both practical difficulties and showing once again the deep rifts between wealthy countries, which have hoovered up the bulk of vaccines, and developing nations. Another feature of a strong Presidency is its careful planning, both substantively and logistically. Can the UK deliver?

Always look on the bright side

Let’s start with reasons to be optimistic. First, the UK Presidency has made one very positive and intelligent move. Prime Minister Boris Johnson’s recent pledge to cut emissions by 78 % by 2035 (compared with 1990 levels) is impressive in its ambition. It set a very high bar for other nations and could, potentially, give the UK a strong moral foundation for asking more of others.

Another positive for the UK is the enduring quality of its civil service. While the UK’s politicians seem to have discovered a penchant for tripping on every possible banana skin in recent years, the reputation of the country’s public servants remains high. The performance of the National Health Service (NHS) during the pandemic is just one example. More relevant to the Glasgow Summit, however, is the caliber of its diplomatic corps and wider foreign service, which remains exemplary.

How to lose friends and irritate people

Set against these positives, though, are several worrying facts.

First, the UK is the assuming the Presidency in the immediate aftermath of Brexit, a process that has left both Britain and its EU neighbors both bruised and a low point in their relationship. Its exit from the EU could hardly be described as one that has built strong and positive relations with the remaining 27 countries. These are countries the UK will need onside to make Glasgow a success.

In October 1970, the UN General Assembly adopted a resolution supporting the commitment to the 0.7% GNI for development aid from developed countries. While developed countries had agreed in theory, however, few were willing to put their money where their mouths were.

The UK was one of these few. In 2013, the Liberal Democrat MP Michael Moore introduced the Private Members Bill to the UK parliament that would enshrine the 0.7% GNI development aid target into law. In  theory, this would protect it from being a bargaining tool in any future government budget discussions.

The law was passed in March 2015 under the Conservative/Liberal coalition government. All major political parties at the last election in 2019 committed to standing by this development target.

Surprisingly, this changed in November 2020 with the Conservative UK Finance Minister’s Spending Review. The review indicated that in 2021 the government would reduce its allocation of development aid to 0.5 % (GNI). This has resulted in a huge cut: US$5.7 billion in aid will no longer be available. While the consequences are yet to be felt, it can hardly fail to be momentous. To put it into context, this cut is more than the combined ODA of Austria, Finland, Ireland, New Zealand, Iceland, Greece, Portugal, Luxembourg, Poland, Slovenia, and the Czech Republic.

Up until the UK’s startling decision to cut its ODA, it has held the moral high ground on this issue. In fact, it was one of only six countries to have reached the United Nations goal of 0.7 %–and the only G7 country to do so. This gave the UK a great boost for the upcoming Climate Summit, where finance will be a critical issue.

Now Johnson’s government has surrendered this advantage, many experts are wondering how it will affect the host government’s efforts to win over the international community that will descend on Glasgow in November? Such cuts will have profound, on-the-ground impacts in many developing countries—hardly a smart way to “win friends and influence people.”

Some of Johnson’s own Tory colleagues have serious misgivings. While a possible parliamentary rebellion seems unlikely, a coalition of Conservative MPs led by former International Development Secretary Andrew Mitchell, and including two former Conservative Prime Ministers, is opposed to the cut, viewing it as a self-inflicted wound. The Conservatives have a majority of 80 in the House of Commons, which means if Conservative 41 MPs supported the reinstatement of the 0.7% then the government could face a humiliating climbdown.

(Drawn from a briefing produced by our colleague Yunus Arikan from ICLEI who follows the UNFCCC negotiations as the focal point of Local government and municipal authorities (LGMA), one of the 9 stakeholders climate constituencies.)

Another potential pitfall in the lead-up to Glasgow lies in the meeting’s arrangements and logistics. By early June, publicly available information for participants in Glasgow was in short supply.

For instance, there was no information yet on the capacity of the Glasgow Blue Zone (the conference location where negotiations will take place) with no breakdown for governments and observers of layout and costs of pavilion and office spaces.

Special Glasgow Summit visas are currently available only for Blue Zone delegations and visa applications have to be submitted to the UK embassies starting from August. At this time, however, no information is available to facilitate visa applications for Green Zone events (where businesses and civil society will operate). Clearly, the clock is ticking on all of this.

Current UK COVID-19 measures ask for a minimum two weeks of quarantine upon arrival for most international participants,. Does this mean visa applications have to be adjusted accordingly as well? Will the policy be altered ahead of the Summit for government officials and other participants? This is not yet clear.

The Glasgow Summit is scheduled to have a Heads of State session on 1-2 November and a High-Level Ministerial Session the following week. No specific arrangement has yet been announced for access of observers during either of these segments, which again makes planning difficult for many non-negotiator participants.

The UN Climate Change Secretariat is expected to announce calls for special events (known as “side events”) on the UNFCCC-accreditation restricted Blue Zone 29 June. The results will be announced on 30 September which will leave less then a month´s time for speakers and organizers to secure their vaccines-visas-travels-accommodation for Glasgow – which will be a challenge in itself for any COP or major intergovernmental conference in normal times. It is also not clear what specific COVID-19 measures will apply for side events and meeting rooms, which influences the number of speakers and participants.

There is also no information yet on whether the UK Presidency and/or the UN Climate Secretariat will offer special vaccinations for participants, or whether observers will enjoy such benefits. Even if they do, the basis of selection will need to be clarified and it is also not clear which countries will accept such offers. Clearly, many logistical matters need to be clarified in a short space of time.

The Glasgow Summit will mark an important moment for Boris Johnson’s Government. After the perceived foreign policy missteps over Brexit, Glasgow represents Johnson’s best opportunity to show that his vision of a new, global Britain can become a reality. The Prime Minister has apparently set great store by showcasing what his country could become in a post-Brexit future. If managed correctly, it could be a crowning success of his leadership.

Yet if he is to burnish such a crown and make it gleam once more, he will need to ensure the logistical details are taken care of, and promptly. Furthermore, he will need to provide more details for how the UK will meet its ambitious 2035 emissions targets, since opponents are already asking how such momentous pledges can be achieved. Bringing the full weight of his country’s diplomatic skills in the lead-up to Glasgow will also be needed. This is no time for half-measures. It should be a complete team effort.

Johnson should consider changing tack on his government’s ODA cuts. If this reduction was repositioned as a one-off, single-year adjustment, an announcement to reinstate some or all of the 0.7 % commitment could be timed in a way that would give Glasgow—and Johnson’s own reputation—a major boost.

Finally, it looks very likely that Convention on Biological Diversity Summit in China may go ahead with only Ambassadors from country embassies in China and no delates or stakeholders from outside China. The Biodiversity Summit starts three weeks before the Glasgow Climate Summit – it makes you think – is this an indicator of what is going to happen?

Felix Dodds is a sustainable development advocate and writer. His new book Tomorrow’s People and New Technologies: Changing the Way we Live Our Lives will be out in September. He is coauthor of Only One Earth with Maurice Strong and Michael Strauss and Negotiating the Sustainable Development Goals with Ambassador David Donoghue and Jimena Leiva Roesch.

Chris Spence is an environmental consultant, writer and author of the book, Global Warming: Personal Solutions for a Healthy Planet. He is a veteran of many climate summits and other United Nations negotiations over the past three decades.