NEW DELHI, India, Aug 26 2021 (IPS) - “Sexual harassment is not about sexual attraction, it is about power. If an individual uses power plays to subjugate other people, when we have such dynamics going on in the workplace, what we need is a system that fights back against it, which unfortunately a lot of workplaces, they allow it to persist,”, says Adrienne Lawrence, anchor and legal analyst in an interview given to me here. 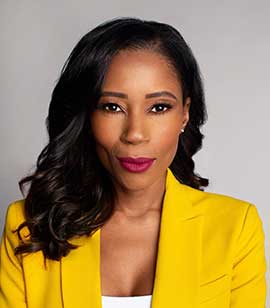 In 2018, Lawrence filed a sex discrimination lawsuit against her former employers in the U.S. District Court, which eventually reached a settlement, but not without Lawrence going ahead and putting up an extraordinary fight against workplace discrimination, misogyny, abuse of power and most of all agaisnt sexual harassment.

“What happened at ESPN to me happens in a lot of workplaces here in the United States. It’s a fact that we have workplace sexual harassment, where women are subjucated and also other margenalized groups. When I had to leave ESPN, it did set my career back, but there are things that are important and worth fighting for, some of us have to stand up and fight back, and the ones that do, are the ones who can make changes,” Lawrence says.

According to this study by the Harvard Business Review, it measures sexual harassment along three dimensions: gender harassment, unwanted sexual attention, and sexual coercion.

Gender harassment mostly involves negative or ill-treatment of women that may or may not necessarily be sexual, but may include things like a supervisor or coworker making sexist remarks, telling inappropriate stories, or displaying sexist material.

Unwanted sexual attention, as self explanatory as it is, means coworker or supervisors behaviors such as staring, leering, ogling, or unwanted touching. Sexual coercion includes bribing or pressuring women to engage in sexual behavior.

Lawrence, in her book Staying in the Game lays down what it takes to confront, identify and avoid toxic workplaces, how to demand accountability, document abuse and help in not just identifying but also gives the readers strategic tools to navigate and deal with abuse and power structures within organizations.

It is imperative that organizations and their human resource departments remain vigilant in responding to concerns, and abuse flagged by women employers. In an ideal world, one would imagine the HR making the employees feel valued, safe and looked after, except in reality, as Lawrence points out, “they are in the job to protect the company’s interest, and so, often seen shielding and protecting “harassholes” – people who use power plays, gender dynamics and reinforce traditional gender rules, pegion-hole female staff, make them uncomfortable and feel small.”

In 2016, what came to be known as the #MeToo movement, over the years gained momentum through a series of takedowns by women in newsrooms across the globe coming out and talking about their own personal experiences and sharing their stories of workplace harassment.

This report by Columbia Journalism Review, where more than 300 people responded, forty-one percent of respondents said they had been subject to harassment in their newsrooms or as freelancers, but only one third had reported those incidents. “Determined to do their jobs, the subjects of harassment lower expectations, make concessions, work around it, and – most often – work through it.”

Harassment in journalism – whether it is feeling uncomfortable at work, being body shamed or fat shamed, unwanted comments and advances, bullying and other types of work-related harassment – abruptly ending contracts, killing stories, changing editorials, mental health issues which individuals are forced to overlook were all lived experiences of hundreds and thousands of women in newsrooms.

“People don’t realize that organizations are just groupings of individuals, and we live in a society which supports patriarchy and white supremacy, so organizations will unfortunately do the same thing, they will support the power structure.

“We need people to not only use their voice but also be represented in power and powerful positions, and also maintain their autonomy. That’s the only way to fight it,” says Lawrence.

While speaking out against sexual harassment and assault has gained momentum, this fight often comes with a cost – the cost of backlash. Women are often shunned, blackballed, called a whistleblower, a nuisance, a troublemaker and so on, all because they dared to have a voice.

Women also face retaliation not just by the abuser – who tends to become even more aggressive with time, but also at work when colleagues start to ignore or distance themselves, when social structures fail to support or stand up for the woman.

This piece in Forbes says that women need different kinds of networks and support systems to succeed, but once they have been retaliated against, that already small network shrinks, and connections are cut off. “For some, careers in that field are often put on hold, maybe forever”.

It is unfortunate that despite the #metoo movement, and big promises made towards equality and accountablity in workplaces, women are still treated as a liability the minute they decide to take a stand at work against harassment, where as men, they become the most important asset for the organization and are protected, despite their actions, even if that involves gender harassment or sexual harassment.

This fear of retaliation, of backlash, and being cut off, blacklisted, surrounded by all sorts of rumors is a nightmare for every woman when she decides to speak up or go down that path of calling the abuser out, but sometimes it takes one woman to raise a voice and shake the system up, as seen with Adrienne Lawrence. The fight is not just against a dysfunctional human resource system or power structure, but also against the deeply rooted misogyny, sexism and dismantling of the newsroom boys clubs.