NEW YORK, Sep 9 2021 (IPS) - The Taliban takeover of government in Kabul is just days old, and the eyes of Afghans and the world are cautiously watching and hopeful to see them stand by their word and ensure that girls’ education be promoted and protected. 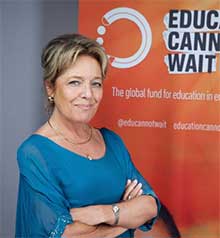 Twenty years ago, under the Taliban regime which prevailed from 1996 to 2001, schooling for girls was banned, although private home-based classes for girls were allowed in some parts of the country. From 2001 onwards the enrolment of girls and boys in schools saw steady gains in Afghanistan, accompanied by a large intake of female teachers. Yet, despite improvements over the years, a staggering 3.4 million Afghan children, especially from rural areas, remain out of school, and 60 percent of them are girls.

Many educated and working Afghan women, fearful of the future, have understandably taken what chances they had in trying to leave the country during August. In one case an entire boarding school for girls was evacuated. This must not become the norm. Every Afghan knows that girls’ education – females representing half the population – is essential for Afghanistan to recover from over 40 years of conflict and reunite. Every believing Afghan knows the first sura of the Quran, which says “Read” – and that this applies to both girls and boys – and also knows that knowledge is at the heart of Islam.

There are some grounds to hope that we can preserve progress made in recent years, through a combination of international diplomacy and support, and the apparent understanding of this new Taliban administration, and its possible political maturity, that it needs both legitimacy and goodwill to govern a drought-stricken country heavily dependent on foreign aid with 14 million people short of food. UN officials speak of cautious optimism. An encouraging early sign is resumption of UN humanitarian flights.

For more than a year, education in Afghanistan and elsewhere has been disrupted by the COVID-19 pandemic so it may take time for clarity to emerge over the Taliban’s declarations that education for girls will continue. Of what kind and up to what age are important markers. On 23 August, Taliban spokesperson Suhail Shaheen tweeted a video showing girls going to a village school. The world hopes that this is a signal that the new regime is willing to follow an agreement reached with UNICEF last December.

Under the ‘Helmand Sangin Workplan’, UNICEF secured the agreement of the Taliban to expand community-based education (CBE) classes to “hard-to-reach and conflict zones” in the provinces of Helmand, Kandahar, Uruzgan and Faryab. The CBE model, using community buildings – sometimes mosques – would allow around 4,000 classes that would cater for between 100,000 to 140,000 children.

Education Cannot Wait (ECW), the UN global fund dedicated to education in emergencies and protracted crises, has worked since 2016 to support communities worldwide – including in Afghanistan – in overcoming obstacles to education for all, especially for girls who are often the first victims of a lack of learning options.

The lack of female teachers in Afghanistan was often cited as a barrier to education for girls, and a focus of ECW’s funding work there, together with UNICEF, Save the Children and local partners, has been to ensure that female teachers make up 60 percent of our programs.

Education is not only a basic human right – it also saves lives, communities, societies and a country. Education plays the crucial role of providing communities with safe places for their children to learn, offering the framework to build sound institutions, stronger economies and more peaceful societies. More educated young people earn better livelihoods and are better able to contribute positively to society.

In marking the UN’s ‘International Day to Protect Education from Attack’ on September 9, ECW is aware that there’s no shortage of examples of the challenges ahead. There is a chronic lack of funding for what should be treated as important leverage to dramatically improve people’s lives in war-torn areas. In less than five years ECW and its partners have reached nearly 5 million children and youth in some of the most challenging crisis settings in over 30 countries; and, over 29 million children through its COVID-19 emergency education response. Yet, millions of other girls and boys are still left behind and need urgent support.

The 2020 UN resolution defending education from attack was presented by Qatar and supported by 62 countries to draw attention to the 75 million school-age minors who don’t have access to education and suffer the effects of prolonged violence. In the UN’s General Assembly words: “Governments have the primary responsibility to provide protection and ensure inclusive and equitable quality education at all levels to all learners, especially those in vulnerable situations.”

This past year has provided tragic examples of the impacts of new and old conflicts on education around the world, often further intensified by the global climate crisis and the pandemic.

Already fragile communities in countries such as Afghanistan, Burkina Faso and Myanmar have seen their dreams of an education for their children threatened or shattered under the pressure of too many simultaneous threats.

The military coup in Myanmar seven months ago suddenly tore apart plans for much-needed education reforms, while the pandemic had already left students unable to attend classes. The situation is acute in poorer rural areas. Border regions have seen old conflicts flare anew. Schools have been bombed and children are taking classes in the jungle.

Burkina Faso and the whole Central Sahel region are experiencing fast deteriorating crises on multiple fronts. Currently more than 2.6 million children are out of school and in the six most severely affected regions of Burkina Faso, the primary school completion rate is only 29%. Schools lack infrastructure for students displaced by conflict, teaching materials are missing, and water and sanitation are in a critical state. Some classrooms have tripled in size, now holding over a hundred pupils each.

Education is the key to break the vicious cycle of war and division in a country, and to provide the means to confront these challenges in local and global contexts. And it is important to remember that not all such crises make media headlines, or when they do they quickly fade away to make space for the next. One of the latest ECW interventions is funding for 200,000 children in Iraq and neighboring countries.

Education appeals receive less than 2 to 4 percent of humanitarian funding, but it is the resilience in crisis-affected children and their unbending hope to access a quality education that keeps us going and inspires us to take action.

To support the children of Afghanistan and especially the girls – and all vulnerable girls and boys caught in every crisis zone around the world – ECW urgently calls for more public and private sector donor funding support now. Their education cannot wait. Afghanistan cannot wait, nor can any other country torn apart by conflict and disasters. Time has come for the full respect of every human being. Not the least the girls and adolescent girls. Time has come for unity, peace, stability and humanity.

The author, Yasmine Sherif is Director of Education Cannot Wait