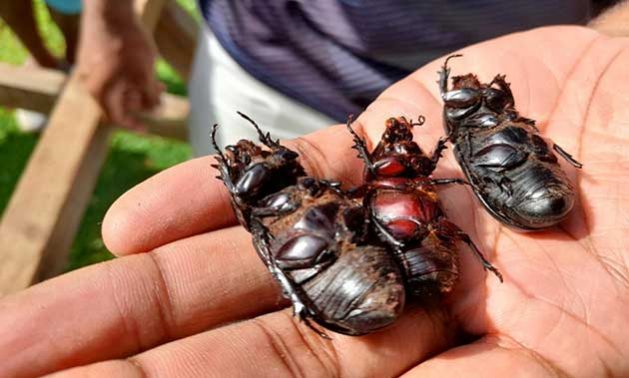 SUVA, Fiji, Sep 3 2021 - The Pacific has been battling the spread of the Coconut Rhinoceros Beetles (CRB) for years and is now challenged by the invasion of a new CRB biotype, the CRB-Guam strain, that has spread to seven Pacific Island countries in just a decade leaving thousands of dead palms in its wake. The Guam strain, together with much more established biotype CRB-S has hampered the success of renovation programmes for mature tall palms as well as newly emergent, high-value coconut product industries (such as virgin oil and coconut water) that offer economic opportunities for communities in the region.

“The Pacific Community is guiding the CRB management efforts through the PARC project, working closely with Vanuatu, PNG and Solomon Islands biosecurity. We hope this manual which is aimed at the new generation of scientists, technicians and extension officers will help control such invasive species and promote local agricultural initiatives.”

The manual is divided into three sections. The first section provides a brief review of CRB in the Pacific and an update on its current status. The second provides information on CRB recognition and assessment of the damage it causes, as well as methods for its collection and handling after it has been identified. Relevant contacts are also provided to facilitate access to expert assistance. Methods for further diagnostics are also outlined. Section three covers control actions for CRB region-wide and draws on the experiences of colleagues in the CRB Action Task Force – particularly those working in Guam, Solomon Islands and Papua New Guinea – on how to control the invasive CRB-G biotype.

SPC’s Pest and Disease Management Advisor Fereti Atumurirava says the emergence of CRB-G as an invasive pest underpins the need for a revision of data and a revitalisation of the CRB Integrated Pest Management (IPM) system to protect coconut and oil palm production.

“All governments and stakeholders in the region now have the tools through this manual to react and proactively liaise with SPC-LRD to provide the necessary guidance in preventing arrival, avoiding further spread within existing sites and containing this pest,” said Atumurirava.

The Pacific Awareness and Response to CRB (PARC) is funded by the New Zealand Ministry of Foreign Affairs and Trade (MFAT) and implemented by SPC. It aims to support control efforts of the CRB infestation in the Solomon Islands, Papua New Guinea and Vanuatu, including the new CRB Guam strain.