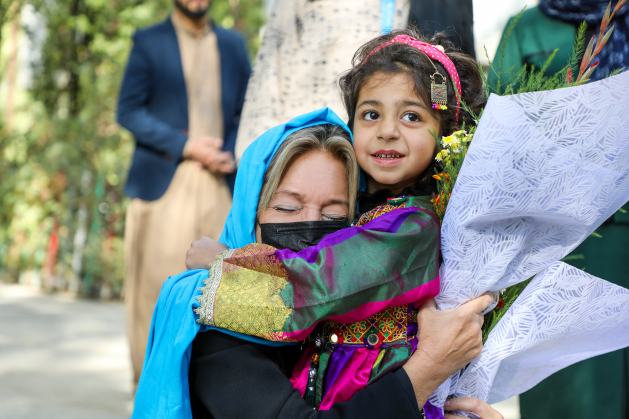 Yasmine Sherif, Director of Education Cannot Wait, is welcomed by a student at a girls’ primary school in Kabul, Afghanistan. Credit: Omid Fazel/ECW

UNITED NATIONS, Oct 27 2021 (IPS) - Education Cannot Wait Director Yasmine Sherif urged the world to support their efforts to provide education to children living in Afghanistan – in what she called the “biggest humanitarian crisis” on earth.

“Their education cannot wait. Action cannot wait across all sectors. Financing and funding cannot wait. And our own humanity cannot wait,” Sherif said at a press briefing from Islamabad Airport at the conclusion of an all-women UN delegation to Afghanistan to assess the educational needs in the country.

The ECW mission was a joint effort with UNICEF Afghanistan to assess the situation and the capacity for UN agencies and their partners based in the country to respond to issues.

Sherif stated that to support education efforts in Afghanistan, attention must also be given to the other crises within the country. Afghanistan was at risk of an “economic meltdown” and on the “brink of collapse” that would disproportionately impact its citizens. To add to their woes, they were about to go into a devastating winter, and so dire was the situation that teachers had not been paid.

“About 20 years of development and the gains we have made are about to be lost if we don’t take immediate action,” Sherif said. There is an urgency to provide aid and continue running the programmes that work directly with the affected populations, including communities in the hardest-to-reach regions.

She emphasized the need to increase funding for UN agencies, NGOs and regional partners to carry out their work. UN agencies such as UNICEF, UNHCR, and UNWOMEN can negotiate access for children, especially girls, to attend school across all education levels and even pay for teachers’ salaries. UN field agents based in Afghanistan already have the experience and awareness to navigate the systems that would allow them to negotiate access. 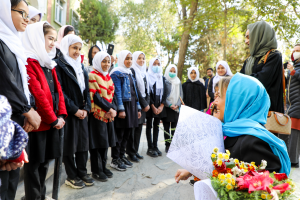 Yasmine Sherif is welcomed by teachers and students at a girls’ primary school in Kabul, Afghanistan.
Credit: Omid Fazel/ECW

The ECW has previously provided US$45 million to support education for boys and girls, including a first response emergency grant of US$4 million in the wake of changes in ruling authorities. Sherif stated that an estimated US$1 billion would be needed to cover the cost to run programmes by the UN agencies, including ECW. In addition to education, this would also be distributed to programmes targeting other areas, including but not limited to food security and water sanitation. In this regard, she stated that food insecurity and access to hygiene would influence citizens and impact their quality of life. It would also affect women and children and their access to specialized health.

Sherif urged that it was more important than ever to continue implementing the SDGs in the middle of the current humanitarian crisis. “Education sits at the heart of all the SDGs,” she said.

She advised that a “direct execution modality” approach that would send funds directly to the UN agencies and partners would be critical as it would ensure funding went directly to the agencies that worked with affected communities. Sherif said it was important to maintain an “apolitical approach” to reach the people affected by humanitarian crises.

Access to education in Afghanistan has been challenged due to pre-existing factors such as accessibility to schools, lack of infrastructure and particularly challenging topography, which mean that many live in hard to access rural areas. The ongoing COVID-19 pandemic also posed an issue for schools and communities, forcing schools to close in 2020.

A study from UNICEF found that 3.7 million children in Afghanistan are out of school, 60% of which are girls. Sherif stated that shrinking this significant gap would require a collective effort from UN agencies on the field with civil society organizations, non-government organizations, the private sector, and local, regional, and national authorities.

Sherif revealed at the press briefing that some primary schools in Kabul and the northern and southern regions of Afghanistan had reopened to both boys and girls. Some high schools have also had mixed classes with both boys and girls. In rural areas, partner agencies such as UNICEF will continue to support the Community-Based Education (CBE) programmes, which help establish Community-Based Schools and other alternative pathways to learning for children and adolescents based in hard-to-reach regions.

Concerns over girls’ access to education were raised when the Taliban assumed power on August 15, 2021. While they established a channel for communication with foreign groups, they have sent conflicting messages regarding education. They declared that high schools would reopen for their male students but did not mention when girls would return. This was interpreted as an effective ban on girls’ right to school.

The ECW-UNICEF team met with the authorities to determine the steps needed to promote access to education for girls. The authorities have allegedly expressed an interest in preserving women’s rights and access to education. They have stated that they are formulating plans but would need time. Sherif expressed that she was “cautiously optimistic” about the Taliban’s openness to negotiation.

The extent of the reforms and actions needed to improve access to education will remain to be seen. What is more urgent at this stage, Sherif reiterated, is immediate action and funding to agencies and partners to address different issues before it is too late.