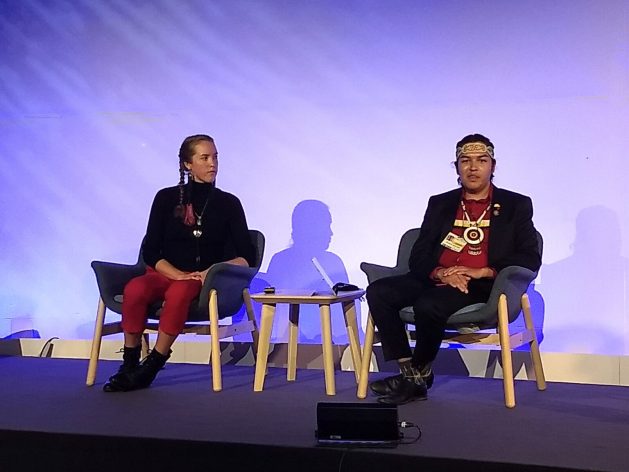 At an event in the so-called Green Zone, Canadian native leaders and the non-governmental Indigenous Clean Energy launched a global hub of social enterprises to pass on knowledge and advice during the Glasgow climate summit. In the picture, Mihskakwan James Harper (R) of the Cree indigenous community explains a mixed battery energy storage project built by a private firm and an indigenous company in the province of Ontario, Canada. CREDIT: Emilio Godoy/IPS

GLASGOW, Nov 9 2021 (IPS) - In the community of Bella Bella on Turtle Island in the western Canadian province of British Columbia, the indigenous Heiltsuk people capture heat from the air through devices in 40 percent of their homes, in a plan aimed at sustainable energy sovereignty.

“We use less energy, pay less, and that’s good for our health,” Leona Humchitt, a member of the Heiltsuk community, told IPS during a forum on indigenous micro-grids in the so-called Green Zone of the climate summit being hosted by Glasgow, Scotland since Oct. 31. “The project coincides with our view. We need to have a good relationship with nature.”

For native groups, these initiatives mean moving towards energy sovereignty to avoid dependence on projects that have no connection to local populations, combating energy poverty, paving the transition to cleaner sources and combating the exclusion they suffer in the renewable energies sector due to government policies and corporate decisions.

The modernisation process that began in the first quarter of 2021 lowered electricity rates from 2,880 dollars a year to about 1,200 dollars for each participating household.

In addition, the switch to heat pumps eliminates five tons of pollutant emissions per year and has reduced the community’s annual diesel consumption of 2,000 litres per household, which is usually supplied by a private hydroelectric plant.

Funded by the Canadian government and non-governmental organisations, the “Strategic Fuel Switching” project is part of the Heiltsuk Climate Action plan, which also includes measures such as biofuel and biomass from marine algae and carbon credits from marine ecosystems.

In 2017, more than 250 remote indigenous communities, out of 292 in Canada, relied on their own electricity microgeneration grids, dependent especially on diesel generators.

The venture in the Heiltsuk community, which is part of the three major Canadian native peoples, is included in a portfolio of indigenous transitional energy initiatives that have been incorporated into the non-governmental Indigenous Clean Energy (ICE) social enterprise in Canada.

A global hub for social entrepreneurship was one of the initiatives launched in the Green Zone, an open event held parallel to the 26th Conference of the Parties (COP26) to the United Nations Framework Convention on Climate Change (UNFCCC), whose annual session ends Nov. 12.

ICE has a list of 197 projects – 72 in bioenergy, 127 in energy efficiency, and 19 in other alternative sources – with more than one megawatt of installed capacity. These initiatives together represent 1.49 billion dollars in revenue over 10 years.

Mihskakwan James Harper, an indigenous man from the Cree people of Sturgeon Lake in the western Canadian province of Alberta, said it is not only about energy sovereignty, but also about community power to dispose of their own resources.

“We change our self-consumption and the communities benefit themselves from the energy, and the earth get benefits as well. Without us, we are not going to reach the climate goals. We show that indigenous peoples can bring innovations and solutions to the climate crisis,” Harper, who is development manager at the NR Stor energy company, told IPS.

NR Stor Inc. and the Six Nations of the Grand River Development Corporation in the Canadian province of Ontario are building the Oneida battery storage project – with a capacity of 250 MW and an investment of 400 million dollars – in the south of the province.

The facility, which will prevent some 4.1 million tons of pollutant emissions, the largest of its kind in Canada and one of the largest in the world, will provide clean and stable energy capacity by storing renewable energy off-peak for release when demand rises.

ICE estimates 4.3 billion dollars in investments are needed to underpin this energy efficiency that would create some 73,000 direct and indirect jobs and would cut carbon dioxide emissions by more than five million tons over 10 years. 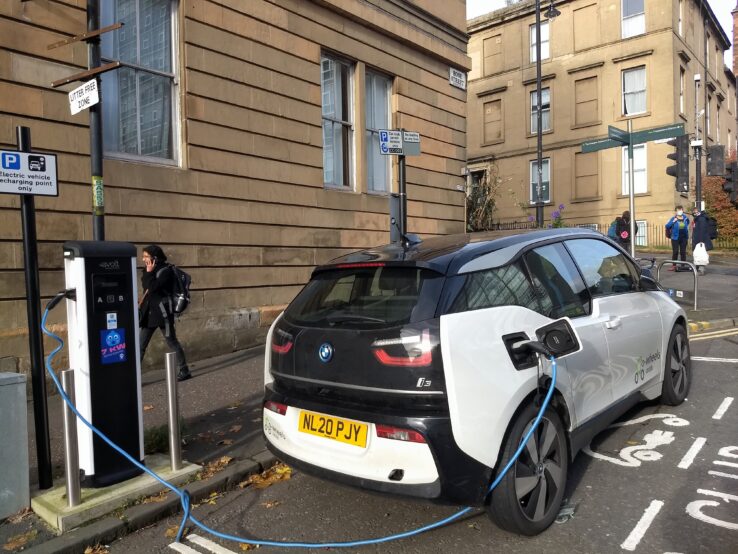 Electric vehicles are still a pipe dream in many indigenous communities, due to their price and the lack of charging infrastructure. In the picture, an electric car is charged at a station in downtown Glasgow, near COP26. CREDIT: Emilio Godoy/IPS

The increase in clean sources plays a decisive role in achieving one of the 17 Sustainable Development Goals (SDGs) set out in 2015 by the international community in the 2030 Agenda, within the framework of the United Nations.

SDG 7 is aimed at affordable, modern energy for all.

But processes similar to Canada’s ICE are proceeding at a slow pace.

In El Salvador, the project is “Access to photovoltaic energy for indigenous peoples”, carried out since 2020 in conjunction with the non-governmental National Salvadoran Indigenous Coordination Council (CCNIS).

It is financed with 150,000 dollars from the Global Environment Facility (GEF) Small Grants Programme to provide 24 solar power systems to three communities in the town of Guatajiagua, in the eastern department of Morazán.

In Honduras, the Lenca Indigenous Community Council and the Pro Construction Committee are installing a mini-hydroelectric plant to benefit two Lenca indigenous communities in the municipality of San Francisco de Opalaca, in the southwestern department of Intibucá.

The project “Hydroelectric power generation for environmental protection and socioeconomic development in the Lenca communities of Plan de Barrios and El Zapotillo”, launched in 2019, received 150,000 dollars in GEF funding.

Clean alternative sources face community distrust due to human rights violations committed by wind, solar and hydroelectric plant owners in countries such as Colombia, Honduras and Mexico, including land dispossession, contracts harmful to local communities and lack of free consultation and adequate information prior to project design. 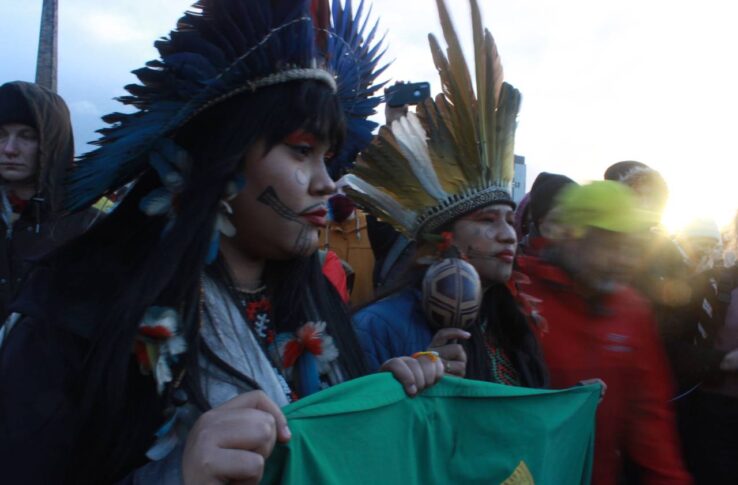 Amazonian indigenous people participate in protests by social movements in Glasgow, in which they claimed that their voices were not adequately heard at COP26. CREDIT: Arturo Contreras/Pie de Página

The evolution of energy initiatives has been slow, due to funding barriers and the limitations imposed by the covid-19 pandemic.

“Our main interest is to enable access to affordable renewable energy and for indigenous peoples to participate in the projects,” Eileen Mairena-Cunningham, REP project coordinator, told IPS.

“These processes should be led by indigenous organisations. Of course we are interested in participating in the global networks,” added the Miskita indigenous woman from Nicaragua.

After the always difficult first step, indigenous communities want to accelerate progress towards these goals.

In Bella Bella, Canada, the hope is to progressively replace diesel with biofuel in vehicles and in the boats that are vital to the fishing community.

“We are not going to electrify transportation overnight,” Humchitt said. “But we see an opportunity in biodiesel. We have to go forward on this issue.”

Harper concurred with that vision. “Of course we want EVs, as they become accessible and satisfy our own needs. We want to get rid of diesel. The communities have to lead the process of the local transition,” he said.

“Existing projects leave us with lessons of what can be done in our territory,” said the activist. “There is a need for policies that facilitate indigenous participation and special safeguards for access to the land. Capacity building is also needed.”

Renewable energies can be added to ecological measures that indigenous peoples already use, such as forest protection and biodiversity and water conservation. But their local implementation requires more than just willingness.