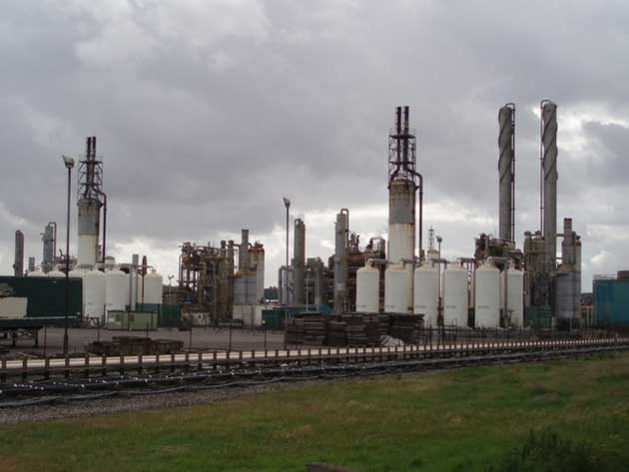 New research estimates that greenhouse gas emissions from nitrogen fertilizer plants such as this one add considerably to the climate impacts of the heavily promoted agricultural input. Credit: Creative Commons Attribution-Share Alike 2.0 Generic

CAMBRIDGE, Nov 9 2021 (IPS) - As world leaders wrap up the UN Climate Summit in Glasgow, new scientific research shows that there is still a great deal of magical thinking about the contribution of fertilizer to global warming.

Philanthropist Bill Gates fed the retreat from science in his book How to Avoid a Climate Disaster earlier this year. “To me fertilizer is magical,” he confesses, nitrogen fertilizer in particular. Under a photo of a beaming Gates in a Yara fertilizer distribution warehouse in Tanzania, he explains that “to grow crops, you want tons of nitrogen – way more than you would ever find in a natural setting [sic]…. But nitrogen makes climate change much worse.”

That last part, at least, is true, and new research suggests that the climate impacts of excessive use of nitrogen fertilizers is much worse than previously estimated. Researchers estimate that the N-fertilizer supply chain is contributing more than six times the greenhouse gases (GHGs) produced by the entire commercial aviation sector.

By all accounts, food and agriculture are barely on the agenda of the UN climate summit, even though food systems contribute about one-third of GHGs. Direct emissions from food production account for about one-third of that, with the principal source being livestock, mostly methane and manure emissions.

But about 10% of direct emissions from come from synthetic nitrogen fertilizer applied to crops. Only a portion of the applied fertilizer is absorbed by plants. Some is turned into nitrous oxide by soil micro-organisms. Some leaches off the soil or volatilizes into gas when it is applied. The cumulative effect is the release of nitrous oxide, a GHG 265 times more potent than carbon dioxide.

Three scientists working with Greenpeace, the Institute for Agriculture and Trade Policy, and GRAIN have carried out the first comprehensive lifecycle analysis of N fertilizer emissions. They used improved data on direct field emissions and incorporated emissions from the manufacture and transportation of N fertilizers. Manufacturing, which relies heavily on natural gas, accounts for 35% of total N fertilizer GHGs.

Taking Africa in the wrong direction

Africa is still not a large fertilizer user, with application rates low – about 15 kg/ha – but rising rapidly with the recent Green Revolution campaigns. While Gates essentially dismisses the climate impacts from fertilizer as a necessary evil to achieve the greater good of food security, evidence is growing that the Green Revolution approach is failing on its own terms. My research showed that in AGRA’s 13 focus countries, yields were not growing significantly and the number of undernourished people has increased 31%.

The greater good promised by AGRA has not been very good.

According to the new fertilizer research, AGRA is taking Africa in the wrong direction. Globally, the use of nitrogen fertilizer is projected to grow between 50% and 138% by 2050. Africa is projected to see at least a 300% increase in the next 30 years. It will be far greater if Gates has his way.

The climate implications of that development path are worrisome. A 300% increase means 2.7 million tonnes (Mt) more of N fertilizer in Africa. With field emissions estimated at 2.65 tonnes of GHGs per tonne of nitrogen and another 4.35 tonnes from production and transportation, total emissions are more like 7 tonnes of GHGs per tonne of N fertilizer.

By 2050, a 300% increase in Africa’s fertilizer use would mean adding about 19 Mt of GHGs per year more than it emits now. Because GHGs accumulate in the atmosphere and nitrous oxide persists for more than 100 years, Africa will have contributed an additional 284 Mt of GHGs by 2050 if fertilizer use increases 300%. If Gates and AGRA get their way and Africa approaches current global averages of 137 kg/ha of N fertilizer, Africa would contribute 800% more, an additional 50 Mt in 2050, equivalent to the emissions from deforesting half a million hectares of Amazon rainforest (about 1.2 million acres). Cumulative GHGs would be 750 Mt by 2050.

That is an amount nearly equal to the annual emissions of the entire commercial aviation sector.

Bill Gates is just plain wrong when he says the only way to grow food is with synthetic fertilizers. Crops need nitrogen and in many areas they can get most or all of what they need from improved agroecological farming. Globally, with improved nutrient management practices there could be a 48% reduction in synthetic fertilizer use with no reduction in cereal yields, according to one article in Nature.

The scientists who authored the new report make three recommendations to reduce GHGs associated with N fertilizer use. All call into question Gates’ Green Revolution model for Africa:

• Select a model of agriculture that does not depend on synthetic fertilizers; intercropping with nitrogen-fixing crops has been shown to increase yields and improve soils.
• Reintegrate livestock into crop farming so more of the nutrients in manure are returned to the land; less than half are now.
• Limit the growth of industrial livestock production and consumption. Three-quarters of N fertilizer worldwide is used to produce livestock feed.

The science is clear: African farmers are right when they call the Green Revolution “climate-stupid agriculture.”

Timothy A. Wise is Senior Advisor at the Institute for Agriculture and Trade Policy and a Senior Research Fellow at Tufts University’s Global Development and Environment Institute.