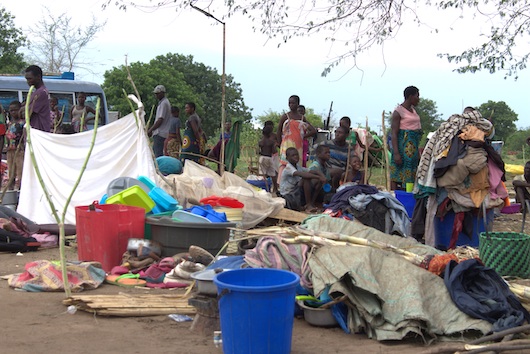 Residents survey the damage after Cyclone Ana triggered winds and floods in Malawi. There has been a call following the latest flooding for climate-resilient approaches to WASH because damaged infrastructure, especially water infrastructure, has serious health consequences. Credit: Charles Mpaka/IPS

Blantyre, Malawi, Feb 22 2022 (IPS) - On the night of January 24, 2022, as Cyclone Ana-triggered rains incessantly rattled on the rusty roof of her house, amid intervals of gusty winds, a thud woke up Josephine Kumwanje from her sleep.

Her heart leapt as she thought thieves had broken into the house.

She summoned some courage, tiptoed to the door of her bedroom, and peered into the dark. She did not see any evidence that the house had been burgled. The windows and the main door were intact.

But she could not sleep because the rain poured down in torrents – until the early hours of the morning when it reduced to a drizzle.

“In a long time, I haven’t seen a combination of heavy rains and strong winds in one night,” she recalls.

In the morning, she saw what that thud was all about: The pit latrine behind her house had collapsed, the slab caving into the hole so that the toilet was no longer usable.

Kumwanje’s latrine was one of the five that had collapsed in the neighbourhood that night. The storm had ripped off the roofs of three houses, and gullies were gorged into areas. The residents could not imagine that such damage was possible.

The tropical depression that formed to the northeast of Madagascar in the Indian Ocean around January 21 and swept into the Mozambique Channel caused heavy and incessant rainfall in Malawi on January 24 and 25, resulting in heavy flooding and destruction.

Two cities and 16 of the country’s 28 districts, mainly in the Southern region, had been affected.

The Department of Disaster Management Affairs said in a situation report that between January 24 and February 12, 2022, shows close to one million people had been affected, 190,000 displaced, 46 people killed, and 18 people still missing.

Among the sectors severely hit was water, sanitation and hygiene (WASH), including the five latrines in Makhetha Township in Blantyre City – even though they were far away from the ‘eye of the storm’.

A rapid assessment by the WASH cluster of the response team, co-led by UNICEF, has found that over 1,000 boreholes, the primary source of potable water in most rural areas in Malawi, have been destroyed. 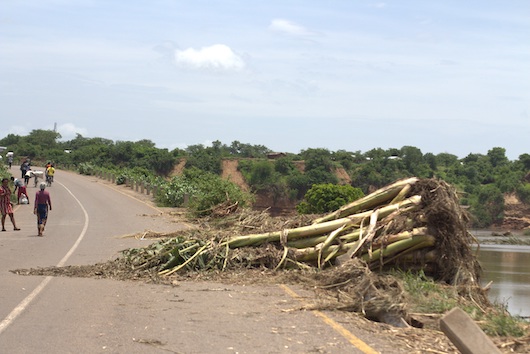 Countless more have been contaminated, while 20 piped water schemes have been damaged, leaving an estimated 300,000 people with no or limited access to safe water. A total of 53,962 latrines collapsed.

According to UNICEF, the destruction of the WASH infrastructure could have far-reaching health consequences.

Worse still, the current floods compounded the damages from other recent floods and have reversed progress on recovery.

In March 2019, Malawi was one of the three countries – together with Zimbabwe and Mozambique – through which Cyclone Idai related flooding swept, destroying infrastructure, and affecting more than one million people in the three countries.

In January 2015, Malawi also suffered devastating floods, which killed 106 people, displaced more than 200,000 and affected more than one million people.

The floods also hit twelve of the 17 districts affected by floods in January 2015.

Five of the districts affected this year were the worst hit by Cyclone Idai in 2019 and were among those hardest hits by the 2015 floods.

The government pegged the recovery and reconstruction budget following the 2015 disaster for the WASH sector alone at 60 million US dollars.

But, as Charles Kalemba, Commissioner for the Department of Disaster Management Affairs, which is in the Office of President and Cabinet, indicates, Malawi has never recovered from these disasters.

“Floods have happened in this country several times in the past few years. In recent times, we had one in 2015. We had another in 2019, and now these. They happen, they attract our attention, and we forget soon afterwards. We have not been good at recovery and resilience at all,” Kalemba says.

Back in Blantyre, Kumwanje rebuilt her latrine in a week.

“I have children. For dignity and hygiene, I could not count on neighbours’ toilets,” says the mother of three, who earns a living selling second-hand clothes.

But the structure, made of plastic sheets, is temporary. It cannot withstand a similar storm.

Kalemba says the country needs serious work in preparedness and resilience, adding that the department is now eyeing a radical shift in strategy.

“We need to relook at financing. The money should not just be used to buy top-of-the-range vehicles for offices. We need to tackle real issues affecting people in the long term.

“Besides, we leave our response in the hands of development partners, but we can see people in these affected areas are becoming poorer. That shows us that the strategy we are using is not working. We need to take full control of the recovery processes, including finding our own resources, instead of waiting for donors,” he says.

In terms of WASH, according to UNICEF, the sector is “aggressively moving towards climate-resilient approaches to improve the sustainability of water and sanitation services and ensure value for money of investments made.”

“The main bottleneck at the moment,” says Paba, “is the lack of financial resources to address the needs because official development assistance has drastically declined over the past years and government allocations are limited.”

A February 2020 UNICEF analysis of public expenditure on the WASH sector in Malawi says that despite limited fiscal space, the government has increased budget allocations to the sector since 2017-18.

Between 2014 and 2019, the government funding averaged 0.39 percent of total expenditure, or just under 0.1 percent of GDP – with much of it heavily tilted towards water.

However, the report notes that Malawi’s budget allocations to WASH as a proportion of GDP is low compared to other countries in the region.

Apart from proposing the government adjusts to reductions in external funding and fixing the frontline staff deficit, the report recommends increased government financing towards WASH, especially for operations.

Paba tells IPS that the Ministry of Water and Sanitation, with support from UNICEF, is developing a climate-resilient financing strategy to help mobilise fresh investments to address sector needs and create a climate risk-informed investment plan.