“It Isn’t Easy Being a Journalist in Kashmir” 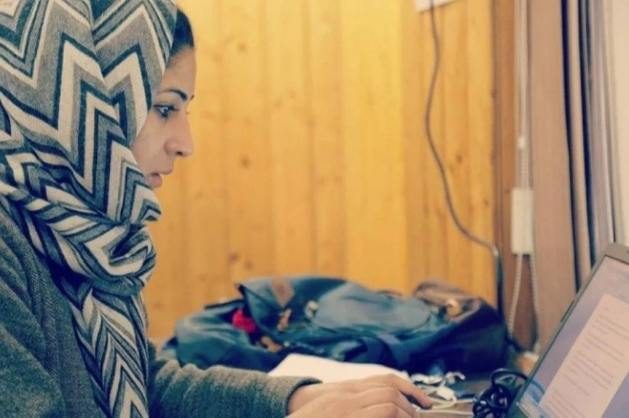 I know the work we do isn’t easy but I truly believe that if I can help get voices out, I want to continue doing what I do. | Picture courtesy: Bisma Bhat

Feb 10 2022 (IPS) - My name is Bisma Bhat and I am a journalist in Srinagar, Kashmir. I currently work as a features writer at Free Press Kashmir, a weekly magazine.

I have lived in Srinagar all my life. My father passed away when I was very young. My two younger sisters and I were raised by our mother. Becoming a journalist was not a part of my life plan. After completing school, I got admission at Shri Mata Vaishnodevi University in Katra, Jammu and Kashmir, for a bachelor’s degree in architecture.

However, because the college was a little far from home and my mother was concerned about my safety, I decided not to go. Instead, I graduated with a bachelor’s in science from a women’s college in 2016. That same year the militant Burhan Wani was killed in an encounter, which led to a lot of tension in Kashmir.

Around that time I visited a nearby tertiary care hospital with my mother for her annual check-up. While I was waiting for her outside the doctor’s room, I saw an unconscious man with a bullet injury in his head being rushed down the corridor on a stretcher. I could hear his mother crying.

As my shock wore off, I remember thinking that I had not spotted even one journalist or media person in the hospital covering what was happening there. I was shaken up, but I also felt that I needed to do something.

Following that incident, I decided to apply to the Central University of Kashmir for a master’s in convergent journalism. I graduated in 2018 and got my first job at Kashmir Monitor, a daily English newspaper. I worked there for almost three years, up until August 2020. I then joined Free Press Kashmir.

It isn’t easy being a journalist in Kashmir. I sometimes only end up covering stories from Srinagar and the areas around me due to lack of connectivity and safety. I also can’t stay out for too long during the day and have to be back home before it gets dark

We currently don’t have a lot of reporters at Free Fresh Kashmir and so I also end up doing a lot of daily reporting work. However, my main interest lies in covering conflict-based and missing-persons stories. I also write for national news portals such as The Wire, Article 14, and Firstpost.

7.00 AM: I spend most of the morning finishing household chores—cleaning the house and utensils and also preparing food for my husband before he leaves for work. Because of COVID-19, my office has allowed me to work from home, but my husband has to go to office every day since he is a government employee with the Department of Education.

Whenever my father-in-law sees me doing household chores, he urges me to go to the office or go outside to source stories. He often tells me I should focus on my job and not spend too much time working at home.

1.00 PM: I quickly finish lunch and sit down with my laptop to start working on a new story. As a first step, I make a list of all the people I have to get in touch with to piece the story together. Once I’ve finished identifying potential sources for the story, I start calling each of them.

For me, talking to all the parties involved is very crucial to the process of writing a piece. I recently worked on a story in Peerbagh, Srinagar, where the domestic help had stolen INR 3–4 lakh and was on the run.

When I got to know about this case, I first reached out to the family whose house had been robbed and got the details from them over a phone call. I asked them exactly what had happened, when they found out, about the role of the placement agency in this entire incident, etc.

After speaking with them, I called the district police station and the agency that had placed the domestic help in that house to hear their version of the event. I won’t go into too much detail about what I found out through my calls because it is a bigger story I am currently working on and hope to pitch to national publications soon.

Having worked as a journalist for a few years, I am comfortable reaching out to people to ask for information. However, this wasn’t always the case. I remember when I started out as a journalist with Kashmir Monitor, I didn’t have many sources in the field.

It was very difficult to find stories, and often I had to travel to the location of the story to be able to write it. During my initial days, I also had to visit various government offices and interact with senior officials in order to get information for research.

As a young female journalist, this wasn’t an easy task. Sometimes I was offered information in exchange for ‘certain favours’. I remember being scared back then. I was very young and had just started building my career; I didn’t know how to handle those situations. It is only now, after having spent many years in this field, that I know how to approach people and how to respond in such instances.

3.00 PM: Once I’ve made notes from all my calls, I start researching online to see if articles covering similar cases have been published in India before. If I find any, I read them. When I need to, I also step out to speak to sources for the story that I am writing. As soon as I feel confident about the outline I have, I shut my laptop and bag. I prefer to start the actual process of writing only the next afternoon and I usually email the story to my editor by the evening.

I remember when Article 370 was abrogated in Kashmir in 2019. Neither could I go to the office nor could I email stories to my editor because all network towers had been blocked. At that time the government was allowing limited internet connection at the Media Facilitation Centre. So I would download my stories on a pen drive and travel all the way to the centre, only so I could share what was happening in Jammu and Kashmir with editors in Delhi.

It isn’t easy being a journalist in Kashmir. I sometimes only end up covering stories from Srinagar and the areas around me due to lack of connectivity and safety. I also can’t stay out for too long during the day and have to be back home before it gets dark.

However, when I got selected for the Sanjay Ghose Media Awards in 2020, it gave me the opportunity to travel to rural areas and write stories that I wouldn’t have otherwise been able to. As a part of the process, I was also able to work on five pieces covering issues related to women.

I spoke to a lot of women during that time and realised that they are all suffering in some way. Most of them aren’t aware of their rights and they don’t know whom to approach or what steps to take when they are ill-treated at home by their husbands or families.

I also realised that very few people from media organisations visit these parts of Srinagar and write about the problems that people are facing here. Reports of violence and conflict in areas such as Anantnag and Bandipora—areas that I was covering at the time—are fairly common.

However, there are very few human-interest stories. The voices of the people living in these places almost never reach us, let alone the rest of the country. As a journalist in Kashmir today, I want to try and change some of that.

6.00 PM: After preparing dinner, I make myself a cup of tea and pick up a book on the history of Kashmir that I’ve been reading. I usually enjoy conflict and war-based stories, but recently I’ve also found myself reaching out for historical fiction and non-fiction books on Kashmir.

Over the course of my career, I’ve realised how important it is to have hobbies and interests that help me relax. As journalists we encounter violence, bloodshed, and deaths almost on a daily basis, especially in a conflict area such as ours. These experiences often don’t leave you.

I still can’t seem to shake off the memory of this one story I was working on in 2020. It was about a girl in Kulgam who had been raped and left to die. When I went to talk to the family, it had only been three days since the girl’s death. I spent one or two hours with them so that they would feel comfortable sharing the details of the incident with me.

They were still in shock but they were also angry because they felt that nobody was doing anything—the entire valley, according to them, was quiet about what had happened. I remember them asking one question repeatedly: When did we get so insensitive?

After covering and writing stories like this on a regular basis, especially about violence against women, I decided to seek professional help for my mental health. Thinking about this case still causes me anxiety.

7.00 PM: I get a call on my phone; it’s the police. They assure me that it’s a routine verification call. They ask me where I work and what exactly I do. As I answer their questions, I try to remember if I’ve written something recently that could warrant a call from the police. As soon as they hang up, I call up my colleagues to check if they have also received similar calls. Thankfully, they inform me that they all did and were asked the same questions.

8.00 PM: My husband and I have dinner together and I tell him about the police call I received earlier. He gets worried and asks me to seriously consider changing my profession for my own safety. This is a conversation we’ve had many times—he tells me it’s too dangerous to do the work that I do, and I tell him that while I do understand the dangers, I don’t want to do any other job.

There is so much suffering in Kashmir. Every day someone’s son, brother, or father is reported missing. Recently I ended up helping a family I had never even met because of a story I had written about three Muslim boys who got arrested in Uttar Pradesh after cheering for Pakistan’s cricket team.

Out of the three boys, two were extremely poor and were on scholarship. In order to afford a lawyer, one of their families had to sell their cow. When I wrote and tweeted about the story, my Twitter feed was filled with messages from people wanting to help and transfer money to the family so that they could get their cow back.

I know the work we do isn’t easy but I truly believe that if I can help get voices out, if I can help someone in any way, I want to continue doing what I do.

As told to IDR.

Bisma Bhat works as a journalist with Free Press Kashmir. Her features have appeared in leading national news portals including Firstpost, Article 14, and The Wire. She has a master’s degree in convergent journalism. Bisma was awarded the Sanjoy Ghose Media Award 2020 for her reportage on the violence against women in Jammu and Kashmir.