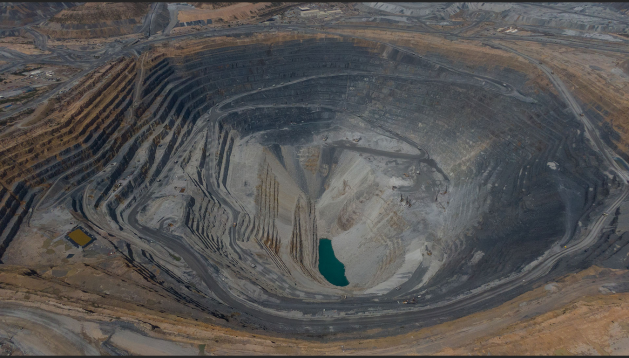 The Peñasquito mine, owned by U.S. company Newmont Goldcorp and located in the state of Zacatecas in northern Mexico, produces gold, silver, lead and zinc, the latter two of which are essential for the energy transition. CREDIT: Courtesy of Lucía Vergara

MEXICO CITY, Feb 22 2022 (IPS) - The debate in Mexico and at an international level is focused on certain minerals that are fundamental to the energy transition, such as cobalt, lithium and nickel. But there are other indispensable minerals that remain in the background.

In addition to lithium deposits, Mexico has proven resources of bismuth, copper, fluorspar, graphite, molybdenum and zinc, involved in one way or another in the different processes of the transition to a low-carbon economy.

“But we have an extractive model, the mineral is extracted and developed elsewhere,” she said, criticizing Mexico’s current mining policies, and in particular the elements that take on special value on the path towards energy decarbonization, a formula to contain global warming.

“If these minerals are extracted, where is the value chain, the benefit for countries like Mexico? We are only going to be left with the negative consequences and sacrifice zones are going to be created to satisfy technologies in other parts of the world,” she said in an interview with IPS.

Olivera is co-author of a forthcoming report on Mexico’s strategic transition metals that identifies 23 minerals for applications such as electrical installations, solar and wind power plants, as well as energy storage devices such as batteries.

The group identified 803 mining projects, of which 237 have a mineral granted in concession that is usable in the transition, most of them inactive, but still in force.

Almost half are in the initial stage, nearly a third in exploration, 13 percent in pre-production and the rest are in pre-feasibility, expansion or closed.

Meanwhile, 58 of the ventures belong to companies from Canada, 29 from Mexico, 26 from the U.S., seven from Australia, three from the United Kingdom, one from China, and in 113 cases the origin of the company is unknown. 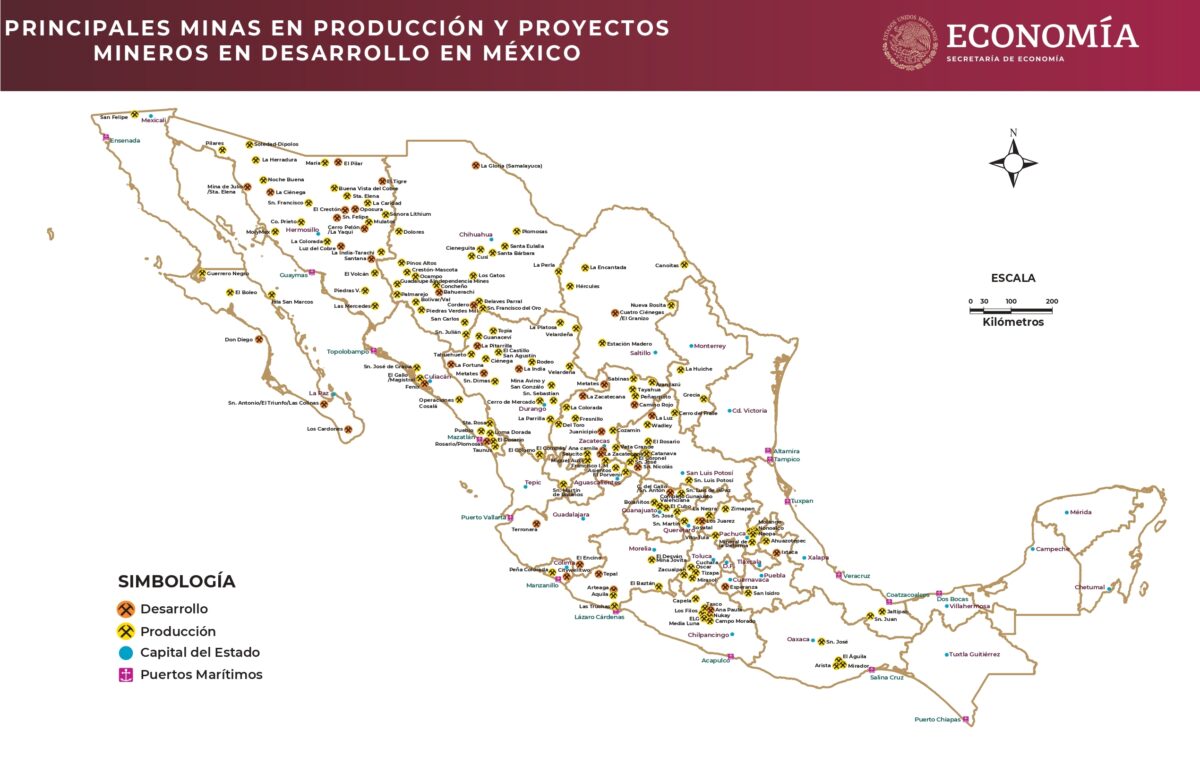 Only 10 percent of Mexico’s territory has been granted in concession for mining activities, but these resources are present almost everywhere in the country. Several of these minerals play a vital role in the energy transition to a low-carbon economy. Map: Mexican Ministry of Economy

Mexico is currently the world’s leading silver producer and is also a major player in the 12 minerals market.

In 2020, the country ranked second in world fluorspar production, fifth in bismuth, molybdenum and lead, sixth in zinc, ninth in copper and tenth in manganese.

The country has 38 clay deposits containing lithium, potassium, magnesium and sodium, of which at least 10 contain five billion tons of these minerals, although their extractive and economic viability has yet to be analyzed, independent expert José Parga told IPS.

Part of the government’s electricity reform proposal for the public sector to regain control of this industry includes the nationalization of lithium and the creation of a state-owned company to mine it.

The mining law in force in Mexico since 1992 prohibits state-owned entities from mining discovered minerals, which in practice means the privatization of the sector, since the activity remains in their hands and the State merely regulates it.

Although there is no exploitation of cerium, dysprosium, erbium, scandium, europium, gadolinium, holmium, ytterbium, yttrium, lanthanum, lutetium, neodymium, praseodymium, promethium, samarium, terbium and thulium – the so-called rare earths, the set of 17 elements that have become fundamental for the transition – exploration is advancing for a project in the northern state of Coahuila.

In addition, zinc deposits could provide indium, gallium and germanium – other important elements for the energy transition that Mexico does not currently produce.

Most of the veins are located in the northern part of the country. 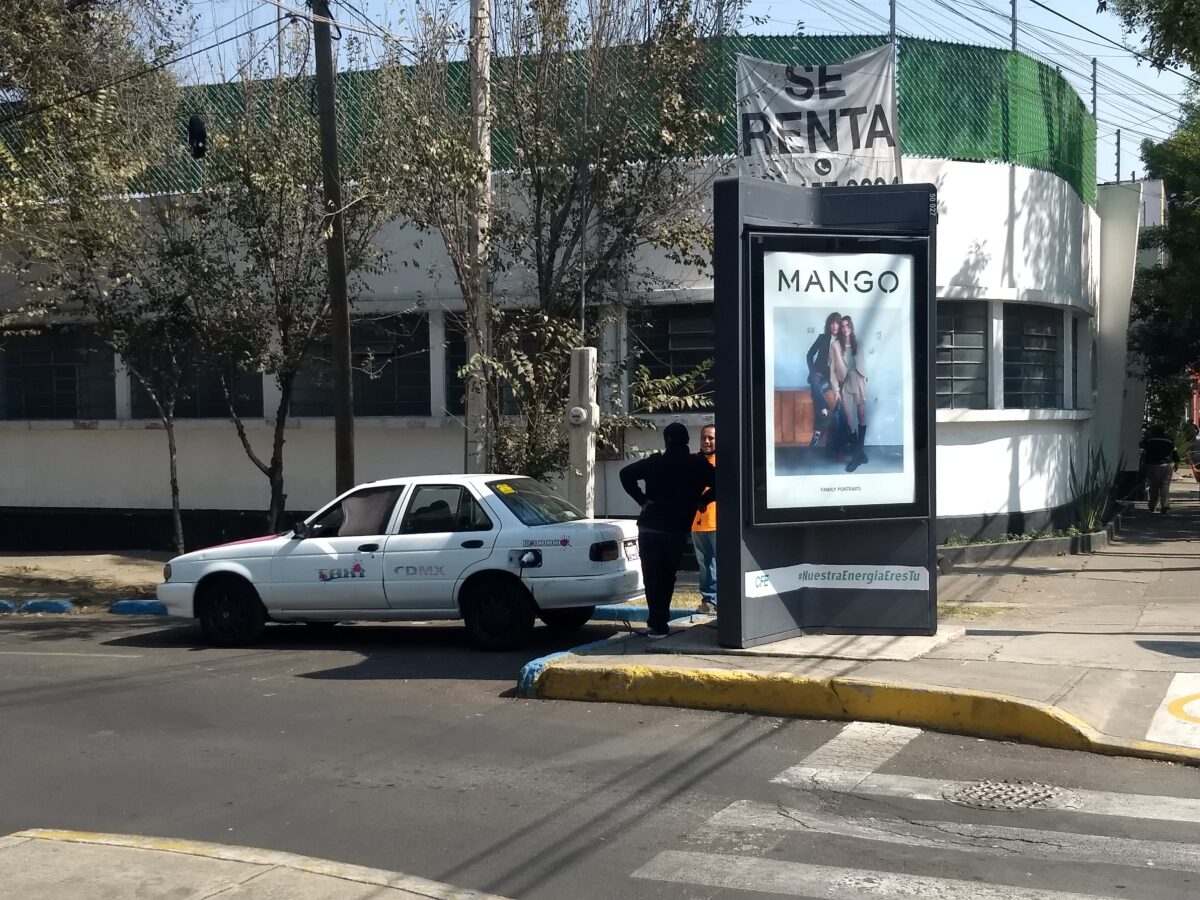 The manufacture of electric vehicles requires the use of several minerals that are abundant in Mexico. In the photo, an electric cab recharges its battery at a public station in a neighborhood on the south side of Mexico City. CREDIT: Emilio Godoy/IPS

Parga underscored Mexico’s potential, which has been only partially tapped.

“There is certainty that the materials are there, but they have not actually been the subject of an evaluation that would allow us to really know their potential and the eventual technical-economic viability of their exploitation,” he stated in his dialogue with IPS.

The expert said, “the first step to take advantage of the country’s mineral resources is to investigate their existence, quantify and classify them to make the best possible use.”

For at least a decade, international organizations have been warning about the consumption of raw materials for the energy transition, which could lead to their depletion or “peak consumption”.

In addition, the mining industry has triggered protests and resistance in communities throughout the country where it operates, due to the environmental damage caused, the low number of local jobs generated and its small contribution to the Mexican economy.

In fact, there are currently more than 50 conflicts between local populations and mining companies in the country.

In Mexico, the energy transition has been at a standstill since 2019 due to the policies of President Andrés Manuel López Obrador, who favors support for fossil fuels and hydroelectric power plants, to the detriment of renewable sources such as wind and solar.

Furthermore, this Latin American country, with a territory of 1.96 million square kilometers, 10 percent of which has been granted in concession to mining companies, lacks a national industry linked to the transition or a strategy for its development.

As a result, there is no production of wind turbines, solar cells or electric cars, as the raw material is exported and returns in the form of components to assemble solar panels or electric vehicles.

At a slow pace

However, there are already some attempts in the Mexican market, such as the assembly of electric units in the central state of Puebla, neighboring Mexico City.

In addition, the foreign ministry, with support from the University of California, launched on Feb. 8 the U.S.-Mexico Electrification Working Group, which seeks “to ensure a coordinated and strategic transition towards electromobility.”

In 2022, the parties will design a binational roadmap, which includes a diagnosis of the automotive sector in both countries and their opportunities in the electric transition. Electromobility refers to the introduction of vehicles that use electricity, instead of fossil fuels, and whose manufacture requires the so-called transition minerals.

But Mexico is undertaking this initiative without the National Electromobility Strategy, ready since 2018 but halted for “review” by the environment ministry under the López Obrador administration after it took office in December of that year.

Although some cities such as Mexico City have introduced electric urban transport vehicles, it is not yet a national trend. Moreover, the energy supply for these units still comes from fossil fuels.

Since 2016, the marketing of new hybrid and electric cars has increased fivefold in Mexico, according to the private consulting firm TResearch Mexico. In 2021, those sales exceeded 39,000 units, representing four percent of the total.

During the Glasgow Climate Summit in December, Mexico signed the Glasgow Agreement on Zero Emission Vehicles, signed by 37 countries, 46 metropolitan and regional governments, as well as 11 vehicle manufacturers, 28 fleet owners, 13 institutional investors in the automotive sector, two financial entities and 21 signatories from other segments, to eliminate the production of internal combustion vehicles between 2035 and 2040.

In January, fossil fuel-based generation in Mexico accounted for 76 percent of the total, followed by wind energy (seven percent), hydroelectric (6.67 percent), solar (4.4 percent), nuclear energy (3.87 percent), geothermal (1.55 percent) and biomass (0.07 percent), according to data from the non-governmental Observatory of the Energy Transition in Mexico.

Olivera and Parga highlighted the concerns about the role of minerals in the energy transition, both at the Mexican and global level.

“They are not necessarily going to be enough to make the transition to 100 percent renewable, we have to take it with a certain amount of moderation. But neither can we continue burning fossil fuels left and right,” said Olivera.

In her view, “there must be benefits for the people, with environmental and social controls, respect for the collective rights of peoples, mitigation measures for socio-environmental impacts and a fairer and more equitable distribution of benefits.”

For his part, Parga suggested building a value chain in Mexico that leads to the production of finished products, such as lithium batteries, and the participation of local communities in mining regions in the different stages of the production process.

“Apart from taking care of the ecological balance, preserving the environment and the cultural environment of the people and communities, it must also ensure that they obtain an economic benefit that allows them to raise their standard of living,” he argued.

The dilemma revolves around internal combustion vehicles, whose economic, environmental and health costs are high, and electric vehicles, whose footprint is also significant.