It is Time for a More Inclusive & Democratic UN 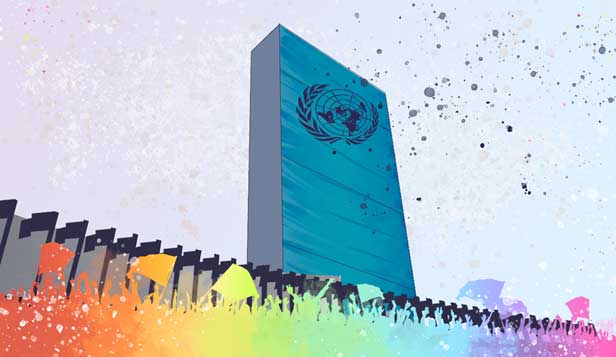 More than 120 lawmakers from over 40 countries lend their support to civil society campaign for a more democratic and inclusive UN. -- It is time for a more inclusive and democratic UN Parliamentarians from around the globe call for more participation. Credit: We The Peoples

KIGALI/ BERLIN/ KUALA LUMPUR/ KINGSTON, Feb 7 2022 (IPS) - The global challenges we face are too complex for governance as usual. It is high time to strengthen the United Nations’ (UN) democratic and participatory character.

The Covid-19 pandemic has exposed deep fissures and inequalities across the world, both between and within countries. At the same time, so much more has to be done to address existential issues such as climate change, poverty, hunger, violence and exclusion. This can be accomplished via governance that puts power in the hands of the people and ensures that no one is left without access to public goods, regardless of their background.

As the premier global body, the UN has a key role to play. Over the past 75 years, the UN has done incredibly valuable work to keep the peace and advance the wellbeing of millions around the globe. However, change is urgently needed for the UN to better meet the challenges we face. No institution should shy away from processes of renewal and reform if it wishes to remain relevant.

This is why we were happy to see that the UN Secretary-General’s recent report “Our Common Agenda” highlights the need for greater participation and inclusion of people, civil society, parliamentarians and other stakeholders in the work of the UN. However, ad hoc consultations and existing mechanisms are nowhere near sufficient to satisfy this need. We need sustainable and permanent democratic infrastructure also on the global level.

In a joint statement with over 120 colleagues, parliamentarians from more than 40 countries on six continents, and in support of a global coalition of over 200 civil society organizations we are proposing three specific measures: a UN World Citizens’ Initiative which enables people to put forward proposals on key issues of global concern; a UN Parliamentary Assembly which includes elected representatives; and a high-level UN Civil Society Envoy to enable greater participation of civil society representatives. 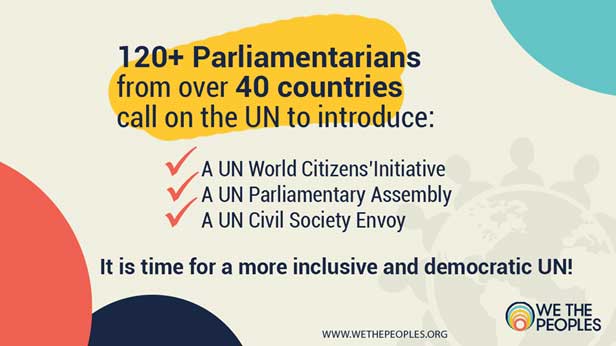 Credit: We The Peoples

We strongly believe that the spirit and proposals embodied in these instruments will provide a way forward for the UN to emerge stronger and to allow it to continue to fulfill its invaluable work in the world.

Allowing citizens to help shape the agenda of multilateral institutions through a UN World Citizens Initiative will make our institutions more inclusive of global diversity. This will allow people all over the globe to help set the priorities for global governance.

Giving people more of a say over who represents them at the UN through a UN Parliamentary Assembly, will ensure more accountability and transparency even on the global level.

The involvement of civil society representatives would help to strengthen cooperation in partnership against power-political interests and increase social and ecological competence in our world. At the moment, it is primarily more privileged voices of civil society that find access to the discussions in New York and Geneva.

Our planet and the 7.8 billion people who live upon it face grave challenges. We urgently require less talk and more decisive action. The 2023 UN “Summit of the Future” proposed by the UN Secretary-General presents a unique chance to reshape global governance and to rethink the UN as the truly inclusive and democratic forum it always had the potential to be.

It is of the utmost importance that the lead up to the Summit is an inclusive and transparent process that allows all stakeholders to deliberate on these and other relevant proposals. Only by working together and allowing all affected at the table, humanity has a chance to meet the challenges of the century ahead.

In the We The Peoples statement, published on 26 January 2022, over 120 sitting parliamentarians from more than 40 countries and six continents called on the United Nations and its member governments to strengthen the world organization’s “democratic and participatory character.”

“We The Peoples” campaign is supported by an alliance of 200 civil society organizations, led by Democracy Without Borders, Democracy International, and CIVICUS: World Alliance for Citizen Participation.