This is an op-ed by Mario Lubetkin, Assistant Director-General of FAO 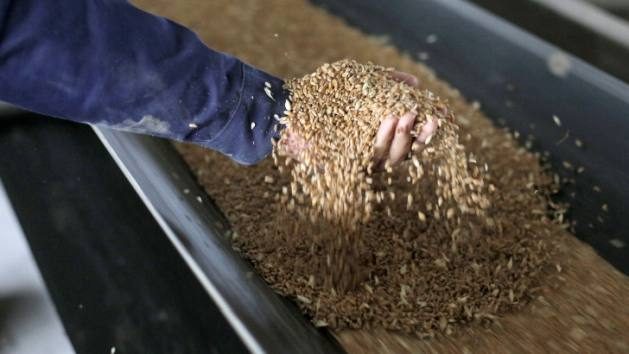 In 2021, an employee in Chernihiv, Ukraine, exhibits grains of wheat on a conveyor belt as they are loaded for storage in granary tanks. Photo: Anatolii Stepanov/FAO

ROME, Mar 17 2022 (IPS) - The effects of COVID-19 over the past two years, in addition to the increase in wars and conflicts, climate change and economic crises, have aggravated global food insecurity, generating serious concerns for 2022.

The main annual report on agrifood insecurity of the Food and Agriculture Organization of the United Nations (FAO) presented in the second half of 2021, the subsequent reports on the crises in areas facing the greatest risk of food insecurity, and the current war between Russia and Ukraine, confirm these pessimistic global trends affecting every region of the world.

In 2020, more than 800 million people were already suffering from hunger. The dramatic effects of COVID-19 projected an increase of 100 million in these past two years, continuing in the negative trend of the last five years.

Around 50 of the least developed countries in Africa, Asia and the Middle East, with low incomes and large food deficits, obtain more than 30% of their wheat from the area currently in serious conflict

With just eight years before 2030, the date established by world leaders to eliminate poverty and hunger within the framework of the Sustainable Development Goals (SDGs), global food insecurity and malnutrition in all its forms persist. Insufficient progress is being made to allow us to consider the possibility that these objectives will be achieved within the agreed time.

The COVID-19 pandemic made clear the causes of vulnerability and deficiencies in global agrifood systems – the activities and processes affecting the production, distribution and consumption of food.

The challenge of overcoming hunger and malnutrition in all its forms (including undernutrition, micronutrient deficiencies, overweight and obesity) goes beyond obtaining enough food for survival. Food for people, especially for children, must also be nutritious.

The high cost of healthy diets, which is likely to increase as a result of the war between Russia and Ukraine, will drive a growing number of families around the world further away from the goal of improving nutrition.

The dramatic European conflict that began on February 24th, whose effects are still difficult to understand in its full capacity, suggests that these trends will worsen.

Around 50 of the least developed countries in Africa, Asia and the Middle East, with low incomes and large food deficits, obtain more than 30% of their wheat from the area currently in serious conflict.

According to a recent FAO study, food prices started to rise in the second half of 2020, reaching an all-time high in February 2022 due to the high demand for products, input, and transport costs.

The study is still unable to record clear trends in the effects of the war that began in February, but considering the difficult conditions for carrying out the traditional June harvest in Ukraine, the massive displacements in many areas of the country that are causing a reduction in the number of agricultural workers, as well as the difficulty in accessing agricultural fields, transportation, among other aspects, makes us foresee a very complicated situation.

Countries with large populations, such as Bangladesh, Egypt, Iran and Turkey, are the main importers of wheat, buying more than 60% of that product from Russia and Ukraine. Other countries with strong internal conflicts, such as Libya and Yemen, and nations such as Lebanon, Pakistan and Tunisia also depend heavily on wheat from these two European countries.

If the situation continues in this direction, the number of people suffering from hunger will inevitably increase, which in the Middle East reached 69 million in 2020 due, in particular, to conflicts, poverty, climate change, the scarcity of natural resources and the economic crisis, in addition to the effects of COVID-19.

In Asia and the Pacific, during the same period, more than 375 million people were in a situation of hunger, facing high levels of poverty, economic contraction, climate change and COVID-19, among other aspects.

In Africa, the unstoppable increase in hunger continues for reasons similar to those of the other two regions. Latin America and the Caribbean is not far behind, reaching 9.1% of the regional population, slightly below the world average of 9.9% of the population.

Faced with the possible acceleration of this global scenario, aggravated by the war between Russia and Ukraine, FAO´s Director-General, QU Dongyu, called for keeping the world trade in food and fertilizers open to protect the production and marketing activities necessary to meet national and global demand.

He also asked to find new and diverse food suppliers for importing countries that would allow them to absorb the possible reduction in imports from the two European countries in conflict. He also focused his concern on supporting vulnerable groups, including internally displaced persons in Ukraine, expanding social safety nets, and anticipating that around the world “many more people will be pushed into poverty and hunger by conflict”.

QU called on governments to avoid ad hoc policy reactions because of their international effects, “since the reduction of import tariffs or the use of export reduction restrictions could help solve agrifood security problems for individual countries in the short term, but it would push prices higher on world markets.”

He also requested to strengthen transparency on world market conditions for governments and investors, relying on existing instruments such as the Agricultural Market Information System (AMIS) of the Group of 20 (G20).