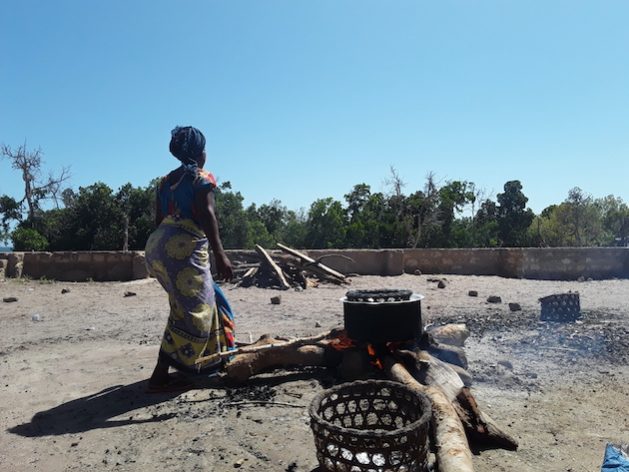 A woman uses a three-stone fire. The method consumes a lot of mangrove wood, which is impacting the livelihoods of the local community. By growing fast-growing trees, the pressure on the mangrove is lessened. Credit: Joyce Chimbi/IPS

Nairobi, Kenya, Apr 20 2022 (IPS) - Despite an abundance of fisheries reserves along Kwale County’s lush coastline located on the south coast of Kenya, fishers can no longer cast a net just past the coral reef and expect an abundant crab or prawn harvest.

Fishing is the community bedrock accounting for at least 80 percent of the economy, and Mwanamvua Kassim Zara, a local fish trader, tells IPS fish stock has declined significantly.

Fish prices are at an all-time high, especially for Dagaa, a tiny silverfish and a household staple food in Vanga Bay Village. Vanga bay is one of 40 boat landing sites in the coastal Kwale County.

“I buy a bucket of fish from the fishermen at 40 to 45 dollars, up from 20 to 25 dollars. The high prices are then transferred to our customers who buy one kilogram of boiled, dried, and salted fish at 3 dollars up from 2 (dollars),” she says.

Experts say these are effects of climate change driven and accelerated by human activity, and the community is feeling the heat.

“The community’s attempts to diversify into maize and rice farming have been unsuccessful because of very high tides from the Indian Ocean and consequent flooding of adjacent paths and rice farms. Another effect of climate change,” says Richard Mwangi from Kenya Forest Services.

More than twenty years ago, this was not the case. The community’s first line of defence against Indian Ocean related catastrophes was intact due to an expansive Vanga Forest spanning over 4,428 hectares, approximately 10,900 acres.

Since then, approximately 18 hectares of mangroves have been lost every year for over 25 years due to over-harvesting of mangroves for fuel and cheap building material, according to the Kenya Forest Service.

“Despite a decline in fish population and scarcity in certain fish species, Vanga is still reliant on fishing, and small-scale fish traders solely use wood fuel to boil dagaa for sale. At least 87 percent of households in this community rely on mangrove wood for energy,” Mwangi tells IPS.

“Coastal ecosystems are extremely important in capturing carbon emissions and supporting livelihoods such as fishing and tourism. Importantly, mangrove forests are a breeding area for fish,” she says.

Left vulnerable and exposed to a myriad of climate change-related challenges, the community is taking the pressure off the mangrove forest by planting at least two hectares of fast-growing tree species to meet the community’s domestic energy needs. These five acres of woodlots will be used by three adjacent villages, Vanga, Jimbo and Kiwegu.

Zara says the community is open to more effective fish preparation technologies to protect mangroves because current methods rely on open three-stone fires that consume a lot of mangrove wood. She indicates that a well-wisher recently donated a large energy-saving stove for communal use.

Mwangi says wood fuel is similarly central to domestic life in Africa, especially in sub-Saharan Africa. He stresses that, as the Vanga community has discovered, current wood energy systems are not sustainable and are a major threat to livelihoods.

According to the Center for International Forestry Research (CIFOR), more than 63 percent of people in Africa have no alternative to wood, relying on wood fuel as their primary energy source. Approximately 90 percent of wood extraction in Africa is used for fuel.

The International Energy Agency’s regional energy outlook warns that wood fuel will remain central to Africa’s future as the primary energy source because cleaner alternatives or sustainable fuels remain out of reach.

Dr Julius Ecuru, Manager at BioInnovate Africa at the International Centre of Insect Physiology and Ecology (ICIPE), tells IPS that sustainable fuel is fuel obtained from biologically based feedstock such as wood, crops like sorghum and sugar cane, or algae, as well as other agricultural waste.

“We can use this feedstock also to produce fuel that has the same chemical composition and quality as the fossil fuel used in jet engines or aeroplanes. If used in this way for jet engines, we refer to it as sustainable aviation fuel. With respect to cooking fuel for household use, sustainable fuels can be prepared or blended in specific ways, but this is yet to gain traction,” he explains.

“Meanwhile, regarding natural wood or wood fuel, households and communities can be encouraged to plant fast-growing or maturing trees, like the Grevilia tree, which has multiple uses. Its regularly pruned branches can, for example, be used as firewood. It also has good soil conserving properties.”

Research by the UN’s Food and Agriculture Organization (FAO) finds that, like the Vanga Forest, Miombo Woodland, an African dryland forest ecosystem, is similarly at risk of over-harvesting and destruction of livelihoods.

The forest covers an estimated 2.7 million square kilometres in the south-central part of the continent. It is Africa’s most extensive tropical woodland, forming a broad ecoregion belt across countries such as Angola, the Democratic Republic of the Congo, Malawi, Mozambique, Tanzania, Zambia, and Zimbabwe.

Experts such as Mwangi warn the woodlands are under threat from conversion into smallholder agriculture, livestock keeping, charcoal production and logging.

He stresses that urbanization will only increase the threat due to an over-reliance on charcoal as the primary energy source for urban households.

The Agency finds that cleaner alternatives such as solar or wind energy are not yet viable because most households and governments “cannot afford the price per kilowatt-hour or the hefty cost of the required infrastructure.”

Mwangi urges communities to work with the government to protect and conserve forests and notes that the Vanga community is, for instance, partnering with the Kenya Forest Services through Kenya’s Forest Conservation and Management Act of 2016.

The Act promotes community participation and aims to halt further degradation and consequent destruction of livelihoods.