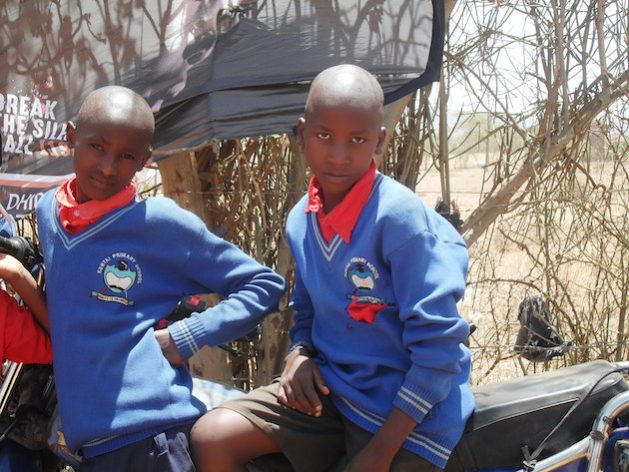 “I come from a pastoral community. My father has five wives and many children. I am the only girl in the family to have completed primary school and now secondary school. My mother fought very hard for me to stay in school. I am a first-year university student studying actuarial science,” she tells IPS.

According to the Ministry of Education, there was almost a 50/50 split between genders in the exams, with 50.90 percent male participants and 49.10 percent female.

Kenya’s strides towards Sustainable Development Goal 4 (SDG 4), the education goal, are well documented in the most recent benchmarking report by the UNESCO Institute of Statistics and the Global Education Monitoring Report. The East African country is one of the participating countries that has provided targets it expects to achieve by 2025 and 2030.

The process started in 2021, and the report shows Kenya is “near-universal early childhood education, with plans to increase attendance to 86.7 percent by 2030. Kenya is also on track to achieve universal primary education by 2030.”

According to the respective countries’ benchmarks, not all countries in Sub-Saharan Africa will achieve SDG 4 by 2030.

“Countries that have participated in this benchmarking process have sent a powerful message. They had shown determination in advancing the promises they made seven years ago when they signed the SDGs,” Manos Antoninis, the director of UNESCO’s Global Education Monitoring Report, tells IPS.

“By setting concrete targets, they are no longer hiding behind an unreachable global goal. They are making plans to achieve it. This is a real opportunity for the global community to rally behind them and help their plans come true.”

According to the Ministry of Education, Uganda worked from the Education Sector Strategic Plan commitments to establish achievable benchmarks for education targets between now and 2030.

The report recommends that all countries that have not set their benchmarks do so in time for this year’s review of SDG 4 at the High-level Political Forum in July because it helps bring countries back on track towards bringing all children in Africa to school.

“As we continue to face peaks in the COVID-19 pandemic, data and evidence become even more important. In Rwanda, the close monitoring of national education priorities and the SDG 4 benchmarks will allow us to intervene quickly and in a tailored manner so that we ensure to live by our strong conviction that no child should be left behind,” a statement by Rwanda’s Ministry of Education says.

Overall, sub-Saharan Africa increased its primary education completion rate from 46 percent to 65 percent or by 19 percentage points, roughly one percentage point per year between 2000 and 2020. At this rate, the region is not on track and lags behind others in most education development indicators.

Nevertheless, between 2000 and 2020, a growing list of countries made notable progress in primary education completion rate.

Togo increased its primary education completion rate from 44 percent to 77 percent, Ethiopia from 18 to 57 percent, Burundi from 13 to 52 percent, Sierra Leone from 26 to 70 percent and Sao Tome and Principe from 46 to 57 percent.

By contrast, between 2000 and 2020, the primary completion rate in sub-Saharan Africa almost stagnated in some countries, like the Central African Republic, which showed a smaller increase from 28 to 35 percent, Guinea-Bissau from 20 to 26 percent and Uganda from 35 to 40 percent.

Against this backdrop, Gordon Brown, UN Special Envoy for Global Education and Education Commission Chair, lauds the commitment of countries that have set their national ambitions and contributions towards achieving the global education goal.

“This process, the first of its kind in education, follows best practices in other sectors like climate. These benchmarks demonstrate countries’ drive to accelerate education progress between now and the 2030 deadline,” Brown says.

“This comes at a time when the global education system faces a myriad of challenges. The percentage of trained teachers, for instance, has been declining for much of the past 20 years, with notable but not enough reversal of this trend in recent years.”

Reported slow progress towards SDG 4 continues, even though African countries, alongside Latin American countries, prioritise education more than any other region in their budgets.

The size of the challenge is large, and the budget itself is too small due to low levels of domestic resource mobilisation and largely stagnant external financial assistance. Education experts, like Antoninis, say it would be incorrect to say that sub-Saharan Africa has been derailed.

The region, UNESCO finds, has set off from much lower starting points due to poverty, malnutrition, health, conflict, displacement, and difficulties in managing unique characteristics such as its linguistic diversity.

Many of Africa’s children are taught at school in a language they do not speak at home. Additionally, changes in education take a long time to mature.

According to UNESCO, COVID-19 has also affected countries unequally. Even within the same region in Africa, some countries have kept their schools closed for two years, while others hardly closed them.

These closures are feared to have long-term damaging effects on Africa because of the lack of opportunities and capacity for distance learning. Still, the report finds that the main challenge remains the very low levels of student learning even when schools are open.

In all, just 3 of 10 of those students who complete primary school learn the basic skills expected of their level of education, the report finds.

Yasmine Sherif, director of Education Cannot Wait (ECW), warns that without education other SDGs are in jeopardy.

“Education is the very foundation to achieve all the other Sustainable Development Goals, and human rights …If you provide the right curriculum, socioeconomic, psycho-social support and access to food a lot can be achieved. If we take this holistic approach in the most formative years of each child, including a strong focus on gender equality, there is a great chance of attaining sustainable development and peace,” she said in a recent interview. ECW is the first global fund dedicated to education in emergencies and protracted crises.

Further, 8 percent of children of primary school age are predicted to be out of school in 2030. Kenya, for instance, will be far off from meeting SDG 4 for the upper secondary level because the country expects that only 64 percent of young people will complete school by 2030.

Overall, no region is on track to achieve universal completion of secondary education by 2030 because completion rates are expected to land at 89 percent at lower secondary and 72 percent at the upper secondary level by the deadline.